We were engaged in rapid response

We here at the Freedom From Religion Foundation are proud of how we often engage in rapid response, and, boy, were we in that mode this week.

Staff Attorney Andrew Seidel had a timely piece in the Madison Capital Times newspaper urging Obama to dismantle the most constitutionally suspect office in his charge: the Office of Faith-Based and Neighborhood Partnerships. “Since its inception, the faith-based initiative has been a stain on the Constitution,” Andrew wrote. “It’s time the president and ex-constitutional law professor did the right thing by erasing this blot.” Let’s hope the president takes Andrew’s advice — for all of ours’ sake.

Donald Trump’s picks and possible choices kept us on our toes throughout the week.

Co-President Annie Laurie Gaylor expressed alarm about Christian ideologues such as Trump’s chief strategist Steve Bannon and possible Press Secretary Laura Ingraham being in control. “It seems the inmates truly are going to be running the White House ‘asylum,’” she wrote.

We also voiced our concerns about Trump’s Education Secretary nominee Betsy DeVos, the Amway heiress who is a chief backer of voucher school programs. “DeVos will soon be given a chance as education secretary to implement her theocratic agenda to destroy public, secular education,” we warned.

And then came along someone we know well — Oklahoma Attorney General Scott Pruitt, Trump’s choice to head the EPA. “The Freedom From Religion Foundation knows firsthand the dreadfulness of Pruitt’s record in public office,” we said. “The Oklahoma attorney general is completely unfit to be in charge of protecting our country’s environment.”

Responding to a trashed banner

Our agility came in handy when our Winter Solstice banner was trashed in a Boca Raton park almost immediately after it was put up. We issued a statement within hours denouncing the attack and offering a reward for information leading to the arrest and conviction of the perpetrators.  (We also appealed for our members to help restore the banner.) “This is a disgraceful expression of intolerance toward dissenting ideas,” said FFRF Co-President Annie Laurie Gaylor. “Our country needs to show respect for minority viewpoints, however unpopular.”

We were also quick on our feet in countering other nativity scenes in public places. Our members put up exhibits in the Illinois Capitol building and in a county courthouse in the state. The display in the seat of the Illinois state government is on show for the eighth year in a row, while our “Bill of Rights nativity” in the Grundy County courthouse has returned for the second time. “We’d much prefer that government property, judicial or otherwise, be free from religion — and irreligion,” Co-President Dan Barker said. “But if a devotional nativity display is allowed, there must be ‘room at the inn’ for all points of view, including irreverence and freethought.” 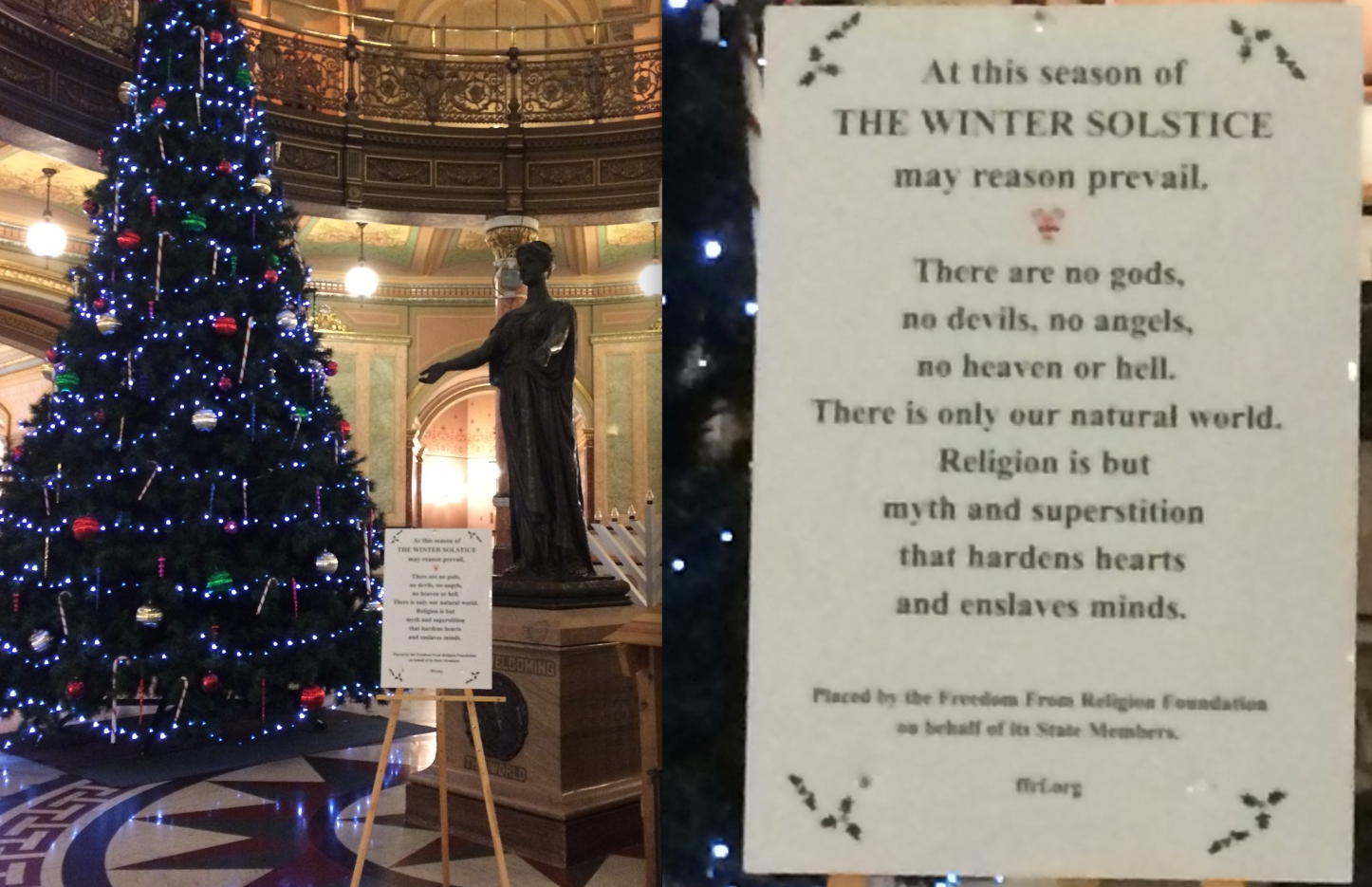 The “war on Christmas” and an inclusive winter season

What could be more urgent currently than the Winter Solstice? Two of us FFRFers offered very readable takes on this festive time. Intern Molly Hanson had a list of recommendations of stores that promote an inclusive season. “May your holiday season be filled with less Christ and more reason!” she proclaimed. And Staff Attorney Sam Grover compared two competing Religious Right consumer boycott lists and came to the conclusion that the whole “war on Christmas” is all phony-baloney.

We did our regular work, too

Come to think of it, it was surprising that we managed to perform our regular work. But we did that, too — from publicizing a victory in Indiana over public school graduation prayer to sending out an alert to our Arkansas members over a proposal to install a Ten Commandments monument at the state Capitol (!!!!).  And we also put together our radio show, the highlight this week being an engaging interview about a Muslim’s journey toward atheism.

Rapid response and regular work, Trump picks and the holiday season — we were able to do all of this with the support and generosity of our members and financial backers.