Skip to content
PrevPreviousWe’re dealing with the fallout — and a lot else
NextDo Bannon and Ingraham’s White House ties signal ‘church militants’ vs. atheists?Next

We here at the Freedom From Religion Foundation have worked frantically the past two weeks.

Gearing up for the holiday season

We’ve been gearing up for “December Madness” and for the challenges of a Trump presidency. And we’ve had a delightful number of victories on the state/church front (plus an interesting run-in with the Catholic League).

We inaugurated our Winter Solstice display next door at the Wisconsin Capitol for the 21st year in a row to counter religious exhibits in the seat of state government. 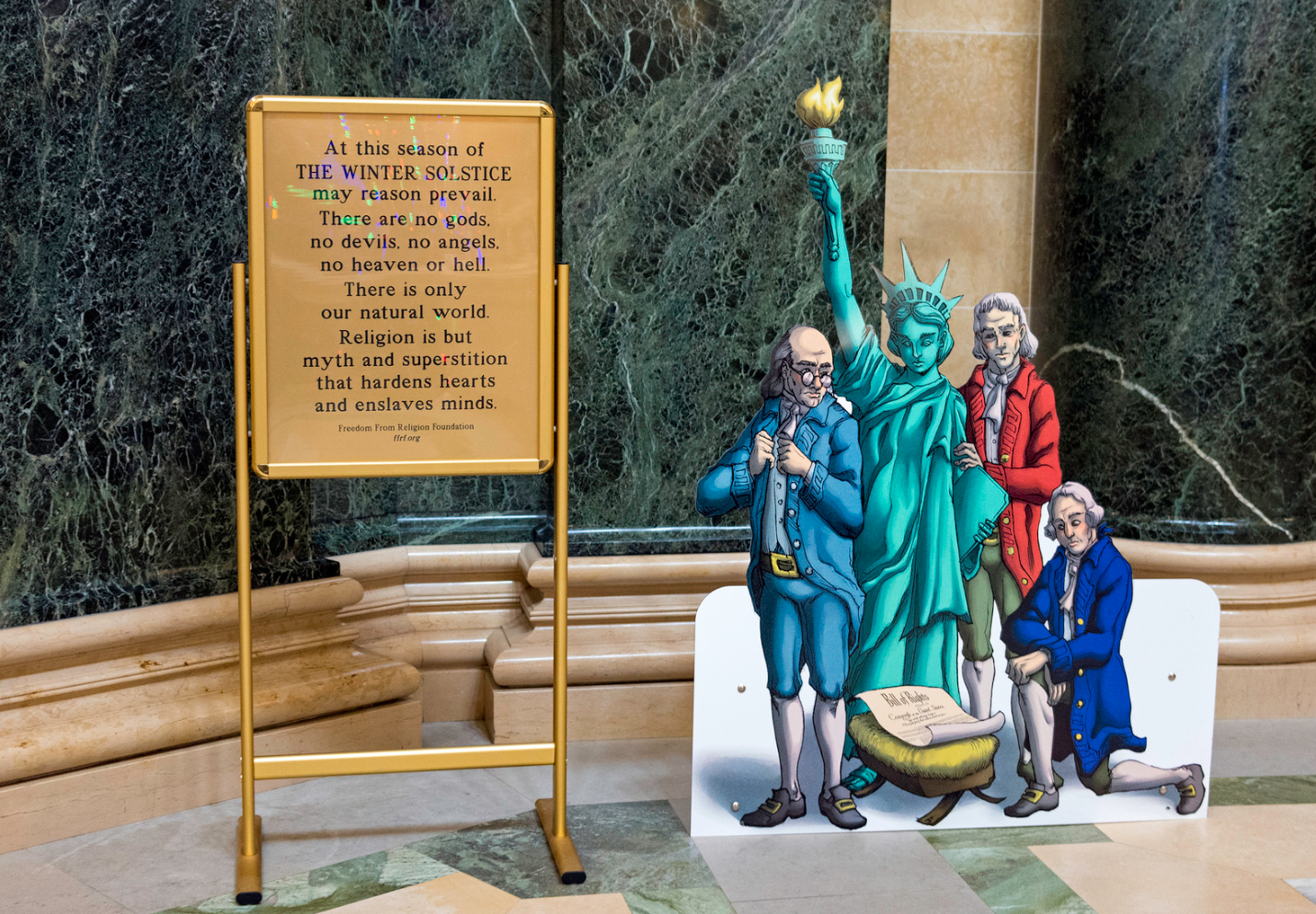 FFRF and our Chicago chapter unfurled our annual displays in the heart of one of America’s great metropolitan centers to affirm the presence of nonbelievers in the American social fabric and to counter the religiosity there. 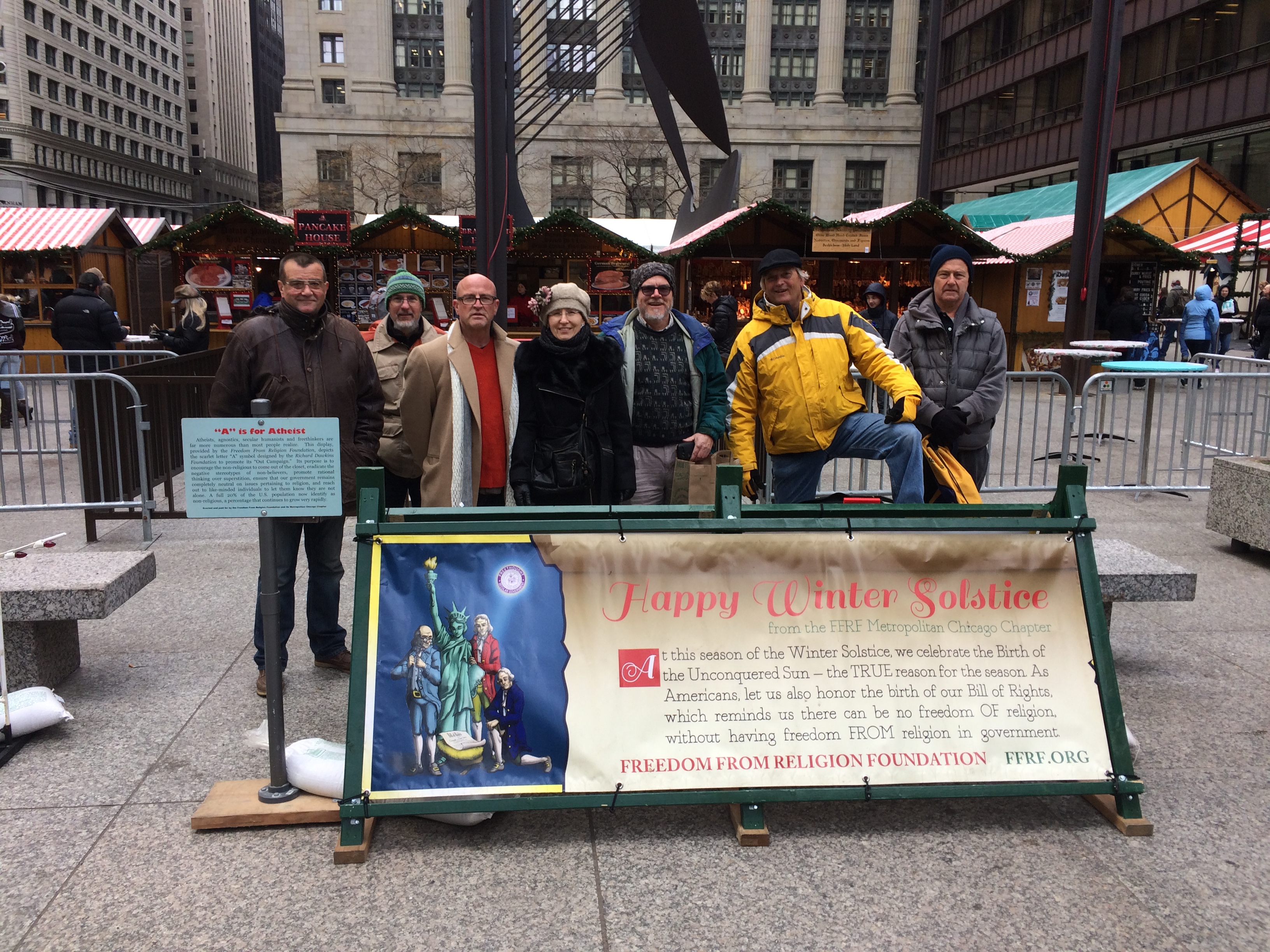 And we sent out a Winter Solstice Survival Guide to our members, offering tons of secular materials to survive the religious onslaught — from banners and cards to caps and magnets, and much more. Check it out!

But we also had to keep an eye on Donald Trump’s cabinet picks. An especially troubling appointment is his choice for education secretary, Betsy DeVos. We detailed her potential to wreak havoc on our education system. “As the top education official in the United States, she can be expected to do everything in her power to take taxpayer money from public schools and send it to private religious schools,” FFRF Co-President Annie Laurie Gaylor said.

And then there was our spirited back-and-forth with the Catholic League. It seems that the organization’s president, Bill Donohue, has nothing better to do than sic his folks after us. As a result, we were inundated with hostile calls and emails. We refused to respond in kind, taking the high road instead.

Global attention for our recent lawsuit

But in spite of all this, we kept our focus. We filed a lawsuit along with ACLU Kentucky on behalf of a member who has been denied an atheistic license plate. Media outlets from around the world reported on this — from the BBC to Indonesian publications! We appreciated all the attention.

Other recent accomplishments also received notable media coverage. After a nearly decade-long effort, we got a larger-than-life official nativity scene removed from a Michigan town. The local Fox station reported: Menominee City Manager Tony Graff said the Madison-based group the Freedom from Religion Foundation sent numerous complaints to the city. “They have sent letters to the city for many years in a row questioning the policy. This year, we decided to enforce the policy,” said Graff.

We appreciate the shoutout, Mr. Graff. And Mr. Mike Peck, director of law in St. Bernard, Ohio. You need to follow Mr. Graff’s lead and remove your city’s nativity scene, too.

There were several additional victories we can claim in recent weeks.

And here, I almost neglected to mention the two Action Alerts we sent out recently: one to all members concerning a harmful religious amendment in Congress to the defense appropriations bill and the second to Californians about the plans of a town to emblazon “In God We Trust” in the City Council chambers.

As you can see, we got an incredible amount done over the past two weeks — and all because of the support and backing of you, our members and benefactors.

P.S. Our recent radio shows are must-listens. This week, we interviewed the legendary philosopher Peter Singer, who spoke about ethics and giving. The week prior, we had on the air two activists who have been recent recipients of honors from our organization.

All Articles by this author
PrevPreviousWe’re dealing with the fallout — and a lot else
NextDo Bannon and Ingraham’s White House ties signal ‘church militants’ vs. atheists?Next