We’re dealing with the fallout — and a lot else

Along with the rest of the country, we at the Freedom From Religion Foundation have been dealing with the fallout of the presidential elections. But that wasn’t all what we were involved with during the past week.

We reacted to the elections

We engaged in rapid response to an administration in which hardline theocrat Mike Pence may be effectively running the show. “We’re alarmed that Donald Trump is poised to turn domestic policy over to his veep, Mike Pence, a man who proudly bills himself as ‘a Christian, a conservative and a Republican in that order,’” we wrote in an appeal to our members. That’s not the only looming threat from a Trump administration, and we described the many potential dangers. 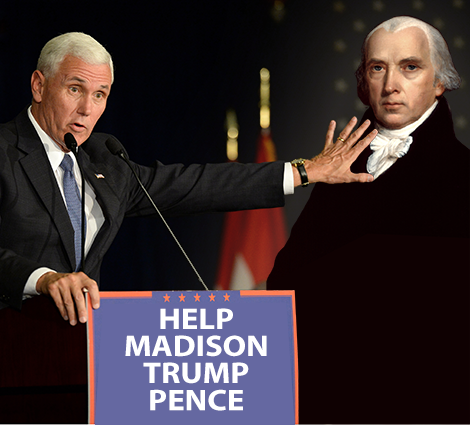 Among the worrisome early warning signs is Trump’s appointment of Steve Bannon as a key policy advisor. We delved into his and Breitbart News’ disturbing attacks on non-Christians — and on FFRF in particular. “It is deeply disturbing to FFRF that the man who led a news site that has promoted ideologies antithetical to the First Amendment — and has condemned FFRF’s defense of First Amendment rights — has the ear of the next president and has been awarded with one of the most powerful positions for shaping federal government policy,” we stated.

A billboard that we recently put up in Albuquerque had a very timely message: “Keep Religion OUT of Government.” Our Co-President Annie Laurie Gaylor aptly commented: “The framers of our godless Constitution were wise to realize the wars, strife, terrorism and persecution go hand in hand when religion is allied with government. The incoming administration would do well to remember that.” 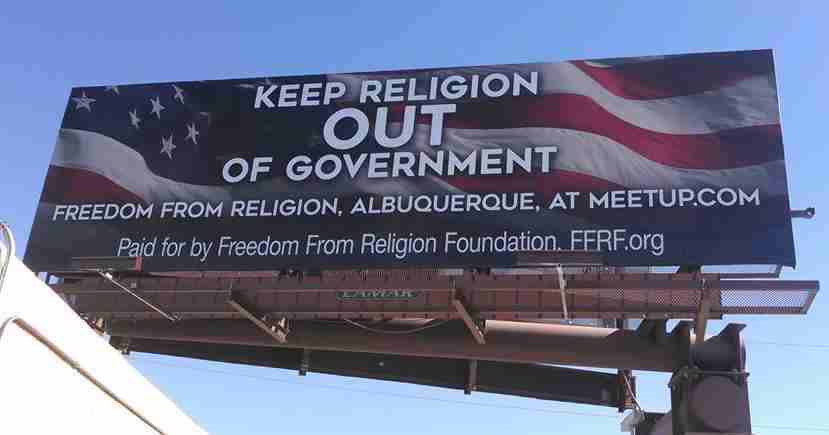 We know when to have fun

But we weren’t just sending out dire signals. We know when to have fun, and what better occasion to celebrate than Openly Secular Day, observed this year on Nov. 15. We’ve put our unique stamp on this commemoration in the form of our virtual billboard campaign, and so we again urged folks to create billboards affirming their secularity. Saturday Night Live alum Julia Sweeney, atheist blogger Hemant Mehta and our own Managing Staff Attorney Rebecca Markert were the stars at a UW gathering to celebrate the day, a get-together that received good campus media coverage.

A pair of victories!

And we diligently pursued our regular work. We obtained a big victory when we got an Ohio village to get rid of a Christian seal and declaration as a result of the efforts of our Legal Fellow Madeline Ziegler. “A Fulton County village has removed a town seal featuring a Christian church from government buildings, street signs and various documents after objections by a national watchdog group,” the Associated Press reported. “The Freedom From Religion Foundation says the village of Archbold also has stopped calling itself a ‘Christian community’ on its website.” Way to go!

Our other legal fellow, Ryan Jayne, also had a recent win to celebrate. He helped tutor a Wisconsin city on the basics of the Constitution when it sanctioned a grant to a church for its youth groups. After quibbling for months, the city of Kenosha finally accepted that it was in the wrong.

No preaching in the Wisconsin Capitol

We were keeping an eye on our home state. We called out a Wisconsin legislator for organizing weekly bible study sessions. “A Republican legislator has been holding weekly bible study sessions for lawmakers in his state Capitol office for the past three years, raising questions again about where the line between church and state lies in the building,” the Associated Press reported in a story featured in several media outlets across the country. “Annie Laurie Gaylor, co-founder of the Freedom from Religion Foundation, said the meetings create an impression that lawmakers care more about working for their god than the people. She sent Rep. Paul Tittl a letter Wednesday asking him to move the meetings out of the Capitol.”

And our case against the U.S. Congress for denying Co-President Dan Barker an opportunity to deliver an atheist invocation is advancing. Earlier this week, our side delivered its arguments in court. It was the U.S. Supreme Court’s “promise of nondiscrimination that led Barker to seek the guest chaplaincy in the first place,” we stated in our press release. “The D.C. district court must now decide whether that language was true and valid or a meaningless sop thrown to the Nones.”

Our radio show is still moving full steam ahead, in spite of our local station’s outrageous decision to drop us and radically change its format. This week, we discussed the aftermath of the elections, our Ohio victory, and the (meager) change in public attitude toward atheists over the years.

So, there you have it, a snapshot of our week. We did so much, from the elections to church/state victories to appeals, radio and lawsuits — and all because of the support and backing of our membership and donors.

Please rate us and our work on this evaluation site for nonprofits.