We’re caught up in football mania

It’s the start of football season, and we here at the Freedom From Religion Foundation are caught up in football mania. 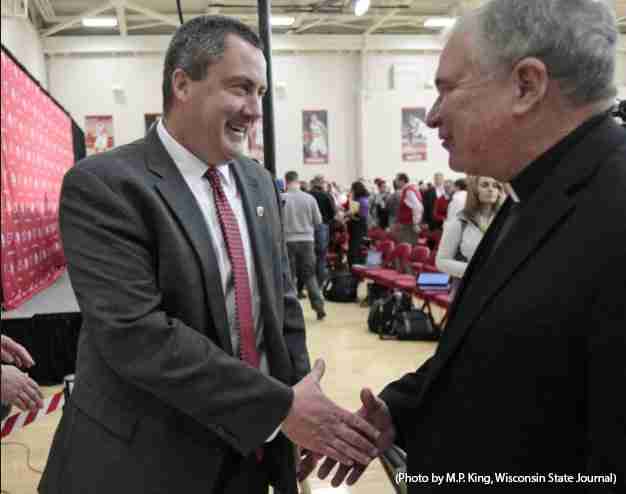 Actually, we’re using this time of the year to make timely complaints to a number of public universities that have a chaplaincy program. Last year, we issued a “Pray to Play” report on such programs around the country, outlining the multiple ways in which they were unconstitutional and exclusionary. We’ve been busy sending out new letters to a number of colleges (along with another copy of the report), pointing out again that they need to terminate their chaplaincies. Among our recipients are some big names in college football: University of Wisconsin, University of Missouri, Georgia Tech, the University of South Carolina and Virginia Tech. Just play the game, guys!

How religion is sabotaging Zika prevention

Football hasn’t been monopolizing our attention, however. We also sent out an urgent Action Alert about the public health crisis that the Zika virus is causing—and how a religiously motivated Congress has sabotaged desperately needed funding to combat it. Members of Congress need to do their job and protect the American people from deadly viruses, and stop playing political football with women’s reproductive rights.

Another timely subject was the recent news focus on two women: Mother Teresa and Phyllis Schlafly. FFRF Co-President Annie Laurie Gaylor blogged about this canonized and departed pair and the significant roles they played in reactionary, anti-women politics. “The recent coincidence of the ‘sainthood’ of ‘Mother’ Teresa and the death of anti-feminist Phyllis Schlafly provides an irresistible chance to reflect on the Catholic Church’s use of its dutiful handmaidens,” Annie Laurie writes.

A hat trick of victories

But we weren’t just taking on “icons.” We also racked up a number of victories. In Kentucky, a county clerk took down from her office an ugly Ten Commandments painting we had complained about. In Missouri, we halted a public high school’s annual practice of having a hymn sung at its awards ceremony (as Todd Starnes of Fox News infamy details in an amusing rant here). And in Texas, a school covered up a Ten Commandments painting and a biblical verse (1 Corinthians 16:13, if you’re wondering) after we contacted officials. To steal from Starnes’ rant, we performed a hat trick.

We’re always trying to mold public opinion. When the Philadelphia Inquirer  and the Express-Times ran fallacious columns and editorials about our case against a very Christian county seal in Pennsylvania, we made sure to set the record straight.

Hear about atheism, football and more

Much as I enjoyed writing the football-related press releases, there are other people in the office more qualified to dwell on the subject — none more so than my friend and colleague PJ Slinger, the editor of Freethought Today. PJ will be on Freethought Radio this week to discuss the paper, his atheism, his background as a sportswriter and, yes, football. (For PJ, Lambeau Field is “hallowed ground.”) We’re attempting to line up other exciting guests in coming weeks, such as an author of an agnostic manifesto. So stay tuned.

We hope you enjoyed your week. We know we enjoyed ours, taking on football chaplains, “saintly icons” and many others — all with your support and encouragement.

All Articles by this author
PrevPreviousMother Teresa & Phyllis Schlafly: Reactionary handmaidens
NextIn the thick of thingsNext