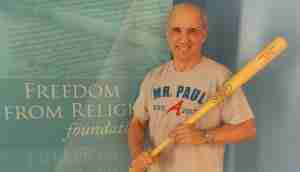 As seriously as we take our work, we try to enjoy ourselves once in a while.

That’s why we’re helping put on a real fun event in St. Paul, Minn., this Saturday. The “St. Paul Saints” will be renamed “Mr. Paul Aints” at a ballgame that we are co-sponsoring with the Minnesota Atheists. Co-President Dan Barker will be on hand at the game, singing the national anthem to start things off. He will also be speaking before the event at a local library, giving a talk and signing copies of his latest book. Let’s play ball!

At the end of a hectic, productive week, we feel the need to get away from the office. We started out with a communiqué against a perversely named bill pending in Congress. The First Amendment Defense Act would legalize discrimination against people in same-sex relationships. It deserves to be scuttled, and we’re trying our best.

We pestered a county judge in Kentucky who refused to marry a nonreligious couple. “I include God in my ceremonies, and I won’t do one without him,” the county judge executive told them. According to the Constitution, you can’t do that, we informed him.

In the same state, our battle continued against Ken Ham and his monumentally misconceived new Ark. We wrote on how the Christian fundamentalist entrepreneur has made a wrong bet by trying to entice public schools with free and reduced admissions. Ham’s latest move seems to be in direct response to a Freedom From Religion Foundation’s memo to more than 1,000 school districts. We got his goat (or dinosaur). Jim Helton, the person who heads our main ally (the Tri-State Freethinkers), in the fight against the gargantuan boat was on our radio show to discuss the struggle.

We urged the San Diego school district to end a summer partnership that involves local churches opening up their doors to children for tutoring in the summer. The teaching sessions will include “character education.” You need to terminate this partnership, we conveyed to school officials.

We insisted a Georgia county courthouse stop flying a very obviously Christian religious flag with a cross on top that is prominently on display next to a judge’s bench. That flag should be removed immediately, we demanded. 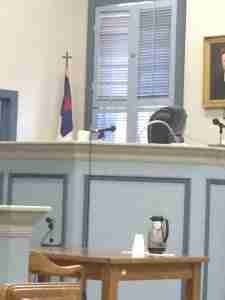 We weren’t just confronting unreasonable folks, though. We also obtained some important victories.

In Decatur, Ind., we had a prayerful public school tennis coach given a talking to after he led members of his team and their families in prayer. And after a long back-and-forth, we convinced a Texas school district to take a harder stance against the showing of harmful Christian propaganda and anti-evolution movies to students.

There are other reasons to be in a festive mood. We have been receiving a good amount of attention in the national media. The Washington Post and the Philadelphia Inquirer featured our insights on important state-church issues recently. And our tussle with Ken Ham and a billboard we’ve put up for the GOP convention in Cleveland have gotten a flurry of coverage.

Plus, the dedication of the restored Robert Ingersoll statue is not too far away. The big occasion is on Aug. 11 in Peoria, Ill., thanks to FFRF and its donors. We are hosting a pre-dedication dinner party on Aug. 10, and you are invited.