Skip to content
PrevPreviousBlack robes at the Red Mass: the undesirable religiosity of Supreme Court justices
NextKilling 50,000+ chickens, goats, and Jesus in the name of forgivenessNext

Our convention is not distracting us

Even with all the time and energy that we’re putting into our convention at Pittsburgh this week, we at the Freedom From Religion Foundation have still been dealing with a range of matters here at our home office in Madison, Wis. 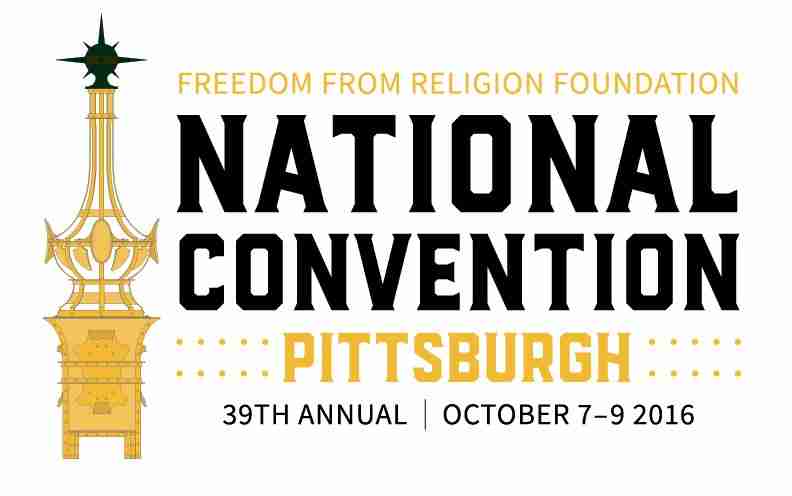 We scored a triumph in the Virginia corrections system for freethought and Humanism. After a lengthy back and forth between FFRF Staff Attorney Sam Grover and the Virginia Department of Corrections, Humanism recently became an officially recognized religion throughout the Virginia prison system. Celebration!

We had a victory in Indiana, too, when in response to our lawsuits, a county there passed a new ordinance prohibiting all private displays on its courthouse lawn from this point onward. That’s what we had wanted all along.

We announced the winners of our grad student essays on religion and government, with more than $9,000 in prize money.

Up and down the East Coast

We alerted everyone to another stage in an important Florida case that we’re co-litigating with a number of other secular groups against a county board that has persisted in being unconstitutionally prayerful.

We then turned our gaze northward to a Connecticut police chief who is blaming nonbelievers for all the ills of society. Not true (besides being a violation of the separation of state and church), we informed him.

We hopped next door to New Jersey, submitting a final brief in our case asking a judge to declare a county’s millions of dollars in grants for church repair a violation of the state constitution. Follow your constitution, folks!

And we headed to the Deep South. We objected to the baptism of several football players at a Georgia public high school. “This is not only unconstitutional, but also unhygienic,” our Co-President Annie Laurie Gaylor commented. USA Today covered the episode.

Black robes at a Red Mass

Our Staff Attorney Andrew Seidel had very readable commentary to offer on an annual Catholic mass that a number of Supreme Court justices attend. Andrew questioned the religiosity of the justices and wrote, “I have my own message for our esteemed Supreme Court Justices: Do you job with empathy. Try to empathize with those of diverse backgrounds, not just with those in the Christian majority, but also with minority religious and nonreligious people.”

A favorable ruling on home turf pleasantly took us by surprise. A Dane County judge ruled that the Catholic Church must pay taxes on a multimillion–dollar lot it owns in downtown Madison. FFRF had filed an amicus curiae brief in June supporting the city of Madison, and we cheered the decision as a victory for taxpayers.

And we asked a Wisconsin police department to change its religious oath and code of ethics. “There are police officers who will not believe in the words of the oath and the Code of Ethics they are supposed to uphold,” Annie Laurie pointed out. “The use of religious language, in addition to being unconstitutional, forces such cops to be dishonest.”

With our Co-Presidents Annie Laurie Gaylor and Dan Barker away in Pittsburgh, our “Director of First Impressions” Lisa Treu, a former music radio DJ, guest-hosted our radio show this week. Lisa asked staff and members to recommend songs with a freethought message that have impressed them in some way, and the result is an “unbelievably uplifting” selection.

And, no, those of us staying back here in Madison didn’t neglect the convention. We focused on a highlight of the gathering: a formerly conservative pastor who came out as an atheist during the opening night of the conference. And we featured constant updates on our social media.

The convention was a big deal, but we didn’t let that divert us from the important work we regularly do—all of it due to the support and backing of our members and well-wishers.

All Articles by this author
PrevPreviousBlack robes at the Red Mass: the undesirable religiosity of Supreme Court justices
NextKilling 50,000+ chickens, goats, and Jesus in the name of forgivenessNext