Skip to content
PrevPreviousWe appreciate the media coverage
NextWe must rise. We must rise and fight like hell.Next

Occupied with the elections—but not completely

We at the Freedom From Religion Foundation have been occupied with the elections—but not to the exclusion of our other work.

We thought it important for our members to be notified about issues of concern to freethinkers. And so, in the run-up to the elections, we’ve been busy sending out action alerts in states that have important subjects on the ballot. On the top of the list is a state question in Oklahoma with the intent of placing back in the statehouse a Ten Commandments plaque that was removed from the Capitol. We dispatched a missive last week urging Oklahomans to vote NO and to spread the word.

But there are other measures of interest to us up for vote on Election Day, such as on capital punishment and end-of-life. Bible thumpers in Nebraska are trying to bring back the death penalty after state Sen. Ernie Chambers, a good friend of FFRF, played a key role in ending it in the state last year. The referendum is confusingly worded, as we pointed out to Nebraskans. We educated Californians about not one but two dueling death penalty initiatives on the ballot. We reminded Nebraskans and Californians that much of the justification for capital punishment in the Western world has been rooted in the Old Testament. And we alerted Coloradans to a death with dignity measure that Catholic institutions have been spending a fortune to oppose.

Another election-related topic that is of utmost importance to us is the use of houses of worship as polling sites. This is problematic on many levels, as we told a county in Arkansas, especially when an issue comes up that the churches are partisan on. An uproar in a county in Florida after a mosque was chosen as a site revealed the hypocrisy of utilizing places of worship during election time. If a mosque can be taken off the list, why not churches and synagogues?

And, obviously, the most important thing in this election is for all of us to vote! We sent out an email to our members reminding them of the necessity of making themselves heard Tuesday and of the importance of the rising secular electoral bloc. “This election could be a flashpoint in American history in which nonreligious voters finally eclipse major religious groups in terms of turnout and influence,” FFRF Co-President Annie Laurie Gaylor wrote in a related column published in the New York Newsday. More the reason to come out on Election Day!

Photo via Shutterstock by LifetimeStock

But the elections are not all we’ve been preoccupied with. Our regular work proceeds simultaneously. We proudly notched two victories recently with cops in different parts of the country. In sunny California, the Orange County Sheriff’s Department took corrective action after an officer attended a National Day of Prayer event. And in our home state of Wisconsin (with a slightly different climate), a police department got rid of God in its oath after we complained. We’re policing the police.

Atheism history (with a dose of Dylan)

We have an enlightening radio show this week. Historian Leigh Eric Schmidt chats about his new, informative history of atheism in the United States. And for all of us Bob Dylan fans, it’s a real treat to listen to FFRF Co-President Dan Barker perform “With God on Our Side.” Speaking of radio, FFRF Staff Attorney Andrew Seidel was the inaugural guest on atheist Dan Arel’s podcast to talk about the elections and our work.

Drop by on Veterans Day!

And we have an invitation for you: We are commemorating Veterans Day next Friday, Nov. 11, in front of our office at the Freedom From Religion Foundation’s unique monument to “atheists in foxholes and the countless freethinkers who have served this country with honor and distinction.” The program begins at 10:30 a.m. No RSVP required, but help refreshments planning by emailing rsvp@ffrf.org. Or phone 608/256-8900 9-5 by Nov. 10. Drop on by if you’re in the area! 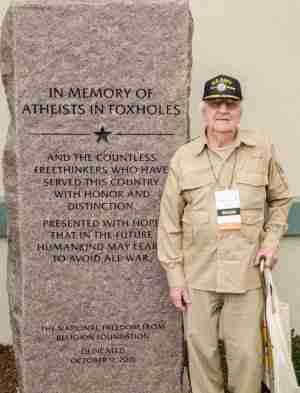 Election issues, victories, radio, and planning a commemoration—so much we manage to do in a week, and it’s all because of the support and patronage of our members and benefactors.

All Articles by this author
PrevPreviousWe appreciate the media coverage
NextWe must rise. We must rise and fight like hell.Next