We’ve been soaring high lately at the Freedom From Religion Foundation.

Take down that megalith, Arkansas!
A major part of our work, after all, is keeping an eagle’s eye on the Constitution and aggressively going after anyone violating it. That’s why we filed a lawsuit this week against the state of Arkansas for reinstalling a Ten Commandments megalith on the Capitol grounds. We were joined by an eclectic bunch that includes freethinkers and religious folks. Our case is already receiving national media attention. 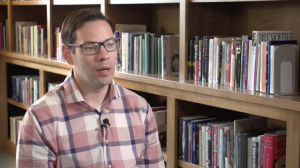 Watch FFRF Senior Counsel Patrick Elliott explain the lawsuit and its significance in our “Newsbite” segment.

Members of Congress are supporting us!
Our fierceness in defending the First Amendment has borne fruit recently. We have received tremendous backing for our case against the congressional chaplain for his discriminatory invocation practices. For the first time, members of Congress (thank you, Reps. Jared Huffman, Mark Pocan and Jamie Raskin!) have filed briefs in agreement with us. And several organizations have also done so — both of the secular and the religious varieties. “I’m touched by the breadth, depth and quality of the support I’ve received,” says lead plaintiff FFRF Co-President Dan Barker.

Keeping a vigilant gaze
We’ve been maintaining a vigilant gaze on the Trump administration’s theocratic policies. That’s why we were quick to denounce its religious attack on Planned Parenthood funding, a move that will seriously harm disadvantaged women.

And you know that we’re always on high alert when it comes to the Religious Right. So when one of its leaders, Paige Patterson, recently fell from grace for condoning the abuse of women, FFRF Attorneys Elizabeth Cavell and Andrew Seidel examined the deeper implications. “If you care about equality for women, it’s time to empty the pews,” they conclude.

In another blog, Andrew sees the failed electoral record of a bible-thumping Pennsylvania politician as a harbinger of how religious pandering will stop yielding results nationwide in the days to come — much sooner than a lot of people think.

Wall of separation sentinels
Our role as wall of separation sentinels means calling out constitutional violations wherever they occur. We warned against Gideon bible distribution in an Arkansas school district, cautioned an Alabama school district after a musically rapping religious assembly, and spotlighted a “soulful” evangelical Mississippi school field trip. Our watchfulness often brings results, as when we taught an Indiana school district a lesson on the First Amendment.

We swoop in
Sometimes, we swoop in to the aid of institutions that indeed respect the First Amendment. That’s the reason we commended an Illinois school district for having a secular and inclusive graduation ceremony — in spite of pressure from the Religious Right.

Soaring over the city
In Atlanta, we soared like an eagle (well, sort of) over the city with yet another freethinking billboard hoisted above the metropolis. “Supernatural belief — the enemy of humanity,” we warned the good folks of the South’s most bustling metropolis.

There are indeed “atheists in foxholes” 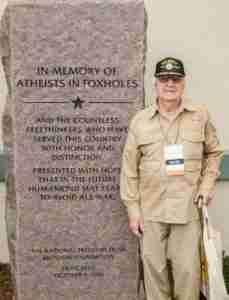 Our military deserves credit for safeguarding our constitutional freedoms, and yet there is a widespread impression that being a freethinker is somehow incompatible with being a part of this important mission. But FFRF Steven Hewett proves it isn’t so during our “Ask an Atheist” chat. Hewett, who served with distinction in Afghanistan, returned home with a Combat Action Badge and Bronze Star only to find a Christian flag flying at the veterans memorial in his hometown. We discuss his successful campaign to get the religious imagery removed, the reason for so many “atheists in foxholes” — and much more.

A fighter for the Constitution
Prior to his retirement, as the editor of West Virginia’s largest newspaper, James Haught had a busy enough time safeguarding the First Amendment. But that didn’t stop him from becoming an expert on freethought and authoring a dozen books on the subject. We talk to him on our radio show this week about his multiple battles on behalf of our Constitution.

We here at FFRF strongly believe in the power of the media. That’s why we recently launched our very own television show, “Freethought Matters.” This week, we interview Debbie Goddard, the director of African Americans for Humanism. You can watch the show in the Madison, Wis., area on Channel 3 Sunday at 11 p.m. and Monday afternoon onward on our YouTube Channel. Our interview from last week with acclaimed pianist Jarred Dunn is available there.

Eagle, hawk or sentinel — all the various personas we assume in defending our freethinking constitutional rights we’re able to do only because of your generosity and support.