Skip to content
PrevPreviousArk Encounter floats on public subsidies
NextNo preacher, the police are not “sent by God to punish evildoers”Next

FFRF had all hands on deck

The Freedom From Religion Foundation had much of its attention taken up by a boat this week. That’s not surprising, since this wasn’t just a plain old boat. It was a replica of the fabled Noah’s Ark.

The Ark Encounter, a brainchild of the (in)famous Christian proselytizer Ken Ham, opened in Kentucky, and we had all hands on deck. We sent out our most widely distributed memo in many years. FFRF dispatched a letter to more than 1,000 school districts—every single district in Kentucky, Indiana, West Virginia and Ohio—advising school officials in these states that they shouldn’t organize trips to the Ark Encounter.

And then we had to battle the floodwaters again. After we circulated our memo, we learned that two public high school bands actually performed at a ribbon-cutting ceremony for the Ark Encounter. Naturally, we sent a letter to the two school superintendents protesting this outrageousness.

What further adds to the absurdity is how heavily publicly subsidized the ark monstrosity is. Staff Attorney Patrick Elliott enumerated the many ways in an informative blog.

But all the communiqués we dispatched were just a small part. Our Co-President Dan Barker was down there in the trenches in Kentucky, in all the heat and humidity, protesting at the front lines with secular allies against the malevolence of the replica. “The Ark Encounter is a monument to hatred and divisiveness,” says Dan. Most of the time there was a drone flying over the demonstration, called the “God Cam,” Dan informs us. It was said to be Ken Ham’s drone, filming the protest from many angles. That didn’t bother Dan or his buddies from the Tri-State Freethinkers, the Kentucky FFRF chapter and many other groups. It was actually fun, Dan reports!

Other issues clamored for our attention, too. For instance, there was a small matter of censorship in Mississippi. The first billboard we ever put up in that state, on July 1, was removed in less than a week. The election-year billboard in Tupelo depicted Uncle Sam saying, “God Fixation Won’t Fix This Nation.” Lamar Outdoor (a billboard advertising behemoth), contending that it was getting “a lot of hate,” “too much heat” and “backlash from the community,” yanked the digital display. It seems Mississippi, a state that simultaneously claims the title of most religious and least livable, is still stuck in its old ways. 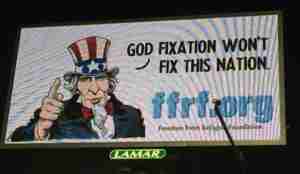 And yet we couldn’t let little things like arks and censorship distract us. We were still keeping an eagle eye on constitutional violations around the country. We sent a letter to a Delaware county warning officials about their repeated grants to religious organizations. They’ve made three of these recently.

Stop it now, we told them!

And we provided our inimitable analyses of current events. A federal judge in Mississippi provided a big victory to those who believe in actual religious freedom. U.S. District Judge Carlton Reeves struck down Mississippi’s unconstitutional “religious freedom” bill. As Religion Dispatches quoted our Staff Attorney Andrew Seidel, it was “excruciatingly different” even from other “religious freedom” laws. It deserved to be ruled out of existence, and we celebrated that.

So, there you have it. A monumentally indefensible ark. Completely inexcusable censorship. And other no-less-important things. All in a week for us at the Freedom From Religion Foundation.

All Articles by this author
PrevPreviousArk Encounter floats on public subsidies
NextNo preacher, the police are not “sent by God to punish evildoers”Next