Elections and so many other things

We at the Freedom From Religion Foundation have in the past week been grappling with election-related issues. But by no means has that distracted us from our other work.

A ballot measure on Nov. 8 that directly impacts the separation of state and church is a state question in Oklahoma aiming to place back a Ten Commandments plaque in the Capitol. Naturally, we’ve been on top of it. Staff Attorney Sam Grover wrote an eloquent op-ed published in the Oklahoma City paper, the state’s largest. “Oklahomans must reject State Question 790 to ensure that their churches remain free from government oversight and their government remains free from religious entanglement,” he said. We adapted the op-ed as a letter and sent it to pretty much each and every Oklahoma newspaper. And we’re contacting our Oklahoma members to alert them.

Another election issue that has occupied us is the use of places of worship (primarily churches) as polling sites. Senior Staff Attorney Rebecca Markert chronicled the problem in a blog (and sent a letter to Palm Beach County in Florida asking officials to refrain from the practice). “It is reprehensible that many Americans of varying faiths or no faith are required to enter a house of worship — whether a mosque, a church or a synagogue — in order to fulfill the most basic civic duty,” she wrote. “Local authorities need to make certain that voting is an absolutely free and fair exercise for all citizens.”

And speaking of the elections, Co-President Annie Laurie Gaylor was part of a panel here in Madison, Wis., that engaged in a thoughtful discussion of religion and politics. Not surprisingly, the elections and Donald Trump were major subjects. “The Freedom From Religion Foundation Co-President Annie Laurie Gaylor said she does not believe faith and politics should mix because it leads to ‘terrorism and pure bloodshed,’” a University of Wisconsin student newspaper reported. “A leader has to uphold the Constitution regardless of their faith, Gaylor said.”

Another issue that Trump has made a topic of public discourse is the sexual harassment of women. Annie Laurie penned a hard-hitting piece on the issue, basing it on an informal survey she took around the office. She called out the Religious Right for its hypocrisy. “It’s high time to cast some symbolic stones, not just at gropers or worse, but at those religious hypocrites who seek to justify or minimize sexual violence against women,” she wrote.

As important as the elections are, we couldn’t neglect our regular work, most importantly the legal battles we fight. Here in Madison, we helped a student file a discrimination complaint against a Catholic-run housing complex, capturing media attention. And we filed an amicus brief in a case against a Texas school board that insists on starting every prayer with a meeting.

We also obtained a victory recently for the Constitution. We made sure that public school employees in an Indiana school district will not continue to impose prayer during school gatherings, as a school guard did in South Bend, Ind. “It was not planned, and we were as surprised by it as anyone else,” the school district assured us. “The issue has been addressed with that employee.”

All over the media

We believe in the importance of being heard through all possible media avenues. So, we took out a full-page ad in the Arkansas Democrat-Gazette, the Little Rock paper, to educate people about what the bible really says on abortion in an effort to change a few minds.

We received a pleasant television surprise recently when we got a wonderful shout-out on C-SPAN lauding our role and effectiveness (it’s at the 1 hour 33 minute mark).

Our radio show this week deals with crossing over from belief to nonbelief. We interviewed Carter Warden, a preacher for decades who decided to come out as an atheist at our convention after years of being on our side clandestinely.

A bit of mischievous fun In the midst of all this seriousness, we made sure to have a bit of fun. When the hateful Westboro Baptist Church folks came to town, we surreptitiously enlisted them. Check out Staff Attorney Andrew Seidel’s cheeky write-up. 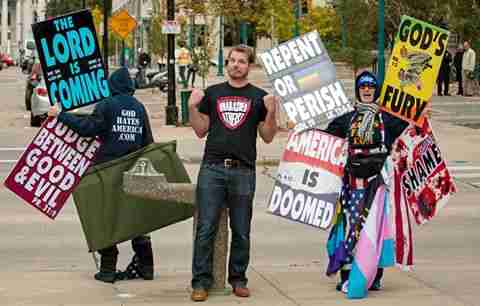 Elections, legal matters, radio, television & print, and a little bit of fun—we did so many different things, and all of it with the support of our members and patrons.