A week of celebration

This is a week of celebration for all of us believers in reason.

Tomorrow is the big day. On Saturday, June 4, tens of thousands of secular-minded folks will be gathering in the nation’s capital for the Reason Rally. The Freedom From Religion Foundation is part of the coalition that is putting together this grand event, the first time it’s been organized since 2012. The world’s largest gathering of nonbelievers will get to hear some of the most well-known freethinkers in the country, including Bill Nye, Penn Jillette, James Randi, Julia Sweeney, Lawrence Krauss (who will also be speaking at the FFRF convention in October) and secular activists such as FFRF’s own Annie Laurie Gaylor and Dan Barker. 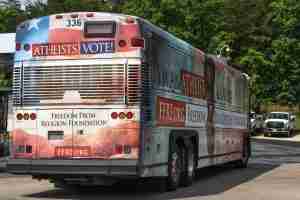 Several of us from FFRF are there. If you’re attending, we hope that you will come by and see what we have to offer during this unforgettable event. We have booths set up both in the exhibition and the donation tents. Let’s celebrate together.

And the fun continues
On the day after the Reason Rally, there is a follow-up event that you don’t want to miss. On Sunday you can attend the Reason Rally Mini-Convention with activists, inspiring speakers and leaders of the secular, freethought and atheist movement. We’ll be there. Stop on by.

Party remotely
And if you aren’t able to make it to Washington, D.C., no worries. You can keep track of all the revelry on Twitter under the #ReasonRally hashtag. On the @FFRF Twitter account, you can see all the things our staff members have been accomplishing at the event. Keep an eye out for the coming issue of Freethought Today, which will have four pages of coverage of the gala, photos and all. 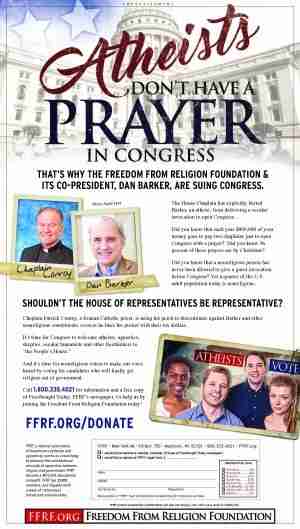 Even though much of our attention has been focused on the Reason Rally, we’ve not been neglecting other matters. Quite to the contrary. We’re running full-page ads this week in three of the most prominent newspapers in the country: The New York Times, The Washington Post and USA Today. The ads focus on the lawsuit that we have brought against the U.S. Congress for denying our Co-President Dan Barker a chance to give an atheist invocation. But they’re also intended in this election season to nudge freethinkers to show their electoral clout. We’re aiming to whoop it up.

Rejoice in a constitutional victory
We have great news to share on other fronts, too. We played a big role in a recent victory for the U.S. Constitution in Texas. FFRF and two of its members had sued the sheriff of Brewster County a couple of months ago over his decision to affix Latin cross decals on county patrol vehicles. In a legal settlement this week, the county has agreed to remove religious decals and not to display them in the future. (Applause cue.)

Cheers to your money well spent
We let out a huge cheer this week when we once again received a stellar assessment from the country’s premier nonprofit charity rating organization. FFRF has for the seventh consecutive year gotten the highest four-star ranking from Charity Navigator in its just-released annual survey, indicate that we are collecting and spending your donation money in an exemplary way.

Your money, well spent—certified by a highly reputable rating organization. In the same week as the Reason Rally and a victory for the constitutional separation of state and church. It’s time to party.