There are busy weeks here at the Freedom From Religion Foundation, and there are really busy weeks. This week fell squarely in the second category.

Like much of the country, we were kept occupied by the chaos in Cleveland. As soon as RNC started, Co-President Annie Laurie Gaylor wrote a blog highlighting concerns with the new additions on religion in the 2016 Republican Party platform. They “reveal the continuing aspiration by many to make ‘GOP’ stand for ‘God’s Own Party,’” she wrote.

Of all the speeches at the convention, the one that was probably the most out there was Ben Carson’s screed alleging that Hillary Clinton is a follower of Lucifer and that Christians are persecuted in this country. Staff Attorney Andrew Seidel had an appropriately smart(-alecky) response. Donald Trump vowed to get rid of the federal provision prohibiting politicking by churches, and we reacted to that, too.

We reminded Republicans of what their icon President Reagan said about religion and state. FFRF greeted GOP convention-goers with a yuuuge message on a Cleveland highway billboard from possibly the most revered figure in the Republican Party: “We establish no religion in this country . . . Church and state are, and must remain, separate.” Oh, well. You can’t say we didn’t try.

FFRF is nonpartisan and will also be keeping an eye on the DNC in Philadelphia next week. We have a billboard and 30 kiosk signs up in the city attesting to the power of the secular voting bloc.

We didn’t let Cleveland take up all our time, though. An event we’ve been focused on in the recent past has been evangelist Ken Ham’s new ark theme park in Kentucky, and this week Annie Laurie wrote a blog underlining the preposterousness of the fable. “Noah’s ark is in fact not just the most improbable religious tale, but the worst and most premeditated ethnic cleansing found in religious literature,” she concluded.

Our protests against the Ark’s opening got some validation when a corporation vowed to make amends for a subcontractor that refused to deliver portable toilets to the demonstration and promised not to work with that entity again. “Sir, I do apologize for services having been refused to your organization by our affiliate company (Five Star Septic),” Michael Nancarrow, Arwood’s associate director of communications, emailed Jim Helton, the president of Tri-State Freethinkers. “I want you to know that this does not an any way reflect the values of Arwood Waste and, as such, certain measures will be taken to ensure that this kind of thing does not happen again.”

Matters at home received some of our attention, too. Freethought Today Editor Emeritus Bill Dunn has been keeping a close eye on proselytizing parents next door to us in Middleton, Wis., who have insisted on hosting weekly “Jesus Lunches” every week during the school year. He lays out the sordid history of the whole endeavor. And we sent out a nationwide Action Alert warning folks about the sneaky attempts by U.S. Sen. Ron Johnson, who represents our state of Wisconsin, to limit enforcement of the Americans with Disabilities Act against private religious schools receiving public voucher money. If you haven’t had a chance to contact you own senators, we hope you will soon.

In the midst of all this, we also had to engage in our regular work, such as sending out legal letters when we unearth violations of the U.S. Constitution. For example, an Ohio judge who insisted on a religious sentence for a defendant got our attention, and we duly admonished him.

But we achieved success, too. A county commissioner in Ohio agreed to remove religion (Jeremiah 1:5 plus an anti-abortion slogan PLUS an anti-atheist quote) from her official email signature after we contacted her. And in Georgia we obtained a truly heartening victory when county officials pledged, grudgingly, to remove a Christian flag and cross display from a county courtroom. A person who formerly worked there provided us an amazing testimonial on Hemant Mehta’s “Friendly Atheist” blog.

“I worked in this courtroom at least one day per month for almost two years, until I moved to a different circuit,” he commented. “I always wanted to do something about this flag, but there exists a strong Christian nationalism in Bryan County and I knew their retaliation would have been severe and swift. A big thank you to Freedom From Religion Foundation and the courageous Bryan County citizen who brought this infraction to FFRF’s attention.” 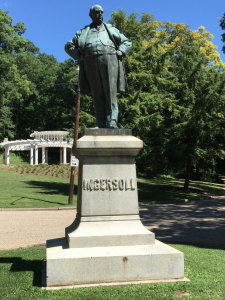 Not too far down the road is the rededication of the Robert Ingersoll statue on his Aug. 11 birthday. If a quick trip to Peoria, Ill., might be agreeable, come join FFRF’s celebratory dedication. The project has been made possible by your help—as is all the work that keeps us so fruitfully busy week after week.

P.S. Tune in to FFRF’s weekly radio show to hear Staff Attorney Liz Cavell give inside information about the Christian flag in the Georgia courtroom, actor Daniel Radcliffe come out as an atheist, and enjoy a presentation of poet Philip Appleman’s “Noah”—his devastating retelling of the biblical fable. The podcast goes up on Mondays.