Skip to content
PrevPreviousKilling 50,000+ chickens, goats, and Jesus in the name of forgiveness
NextReligious hypocrites grope for excuses for Donald Trump gropingsNext

A convention, a media campaign— and more

Two things occupied us the past week: our annual convention and the campaign season. But we did a lot else, too. 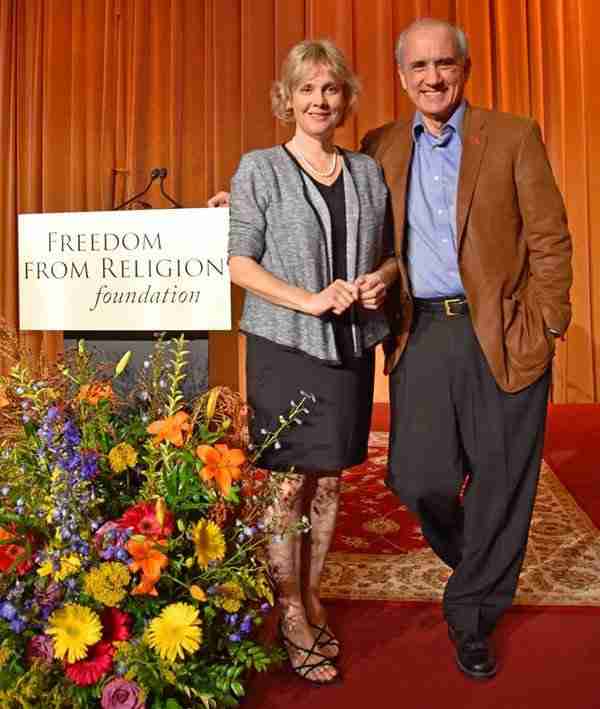 Highlights of a successful convention

Our recent convention in Pittsburgh went well. There were several highlights.

On the opening night on Friday, Oct. 7, a former conservative pastor came out publicly after several years as a closeted atheist in the Bible Belt. Carter Warden aka “Adam Mann” was an anonymous co-founder of The Clergy Project, a group for current and former religious professionals without supernatural beliefs. Carter for the first time publicly declared his nonbelief in a stirring speech.

There were other moving moments. Rafida Bonya Ahmed barely survived a machete attack in Bangladesh last year that killed her husband Avijit Roy. In a poignant talk at the convention, Rafida described the murderous assault’s impact on her life.

Renowned freethinker Lawrence Krauss gave an impressive lecture on the wonderment of science and the mysteries of the universe. And there were several other big stars in the atheist firmament present, such as Susan Jacoby and Daniel Dennett. Plus, attendees got to have fun, too. There was an organized tour of one of the most famous structures in the country: the Frank Lloyd Wright-designed Fallingwater. My colleagues tell me that it was quite an experience. What was also gratifying was that the Pittsburgh media considered the convention newsworthy enough to give it coverage, including of an award given to a local resident for her courage. The convention was well attended, with 500-plus freethinkers present. We look forward to meeting many more in Madison for the 2017 convention next September. Here are some photos. And members can look forward to extensive coverage in the November issue of Freethought Today.

The power of the secular voting bloc

As soon as we made it back to Madison from the convention, we launched our election season campaign to convince the nation of the power of the secular voting bloc. More than 26 million voters with no religion could turn out on Nov. 8, dwarfing previous records and providing the power to sway the direction of the country for the first time in history, we proclaimed to everyone. We contacted numerous media outlets to make them take note of this major social phenomenon. “This election could be a flashpoint, where secular voters finally eclipse other major religious groups in terms of turnout and influence,” says our Co-President Annie Laurie Gaylor. “It’s time that candidates acknowledge our presence and commit to keeping religion out of government.” 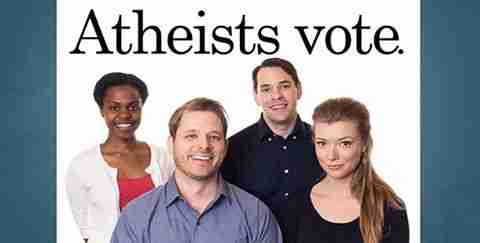 As busy as the staff was with the convention and our national press drive, we still found time to offer topical commentary. Staff Attorney Andrew Seidel wrote an enlightening column on the Jewish ritual of Kapparot, observed earlier this week, in which Hasidic Jews believe that swinging a chicken around your head three times transfers your sins on to the bird.

“Do Christians realize that Christianity itself is Kapparot writ large?” Andrew incisively observed. “Jesus is nothing more than the scapegoat for Christians. He died for your sins.”

And Andrew engaged in a simultaneously hilarious and instructive Twitter exchange with an Arkansas State Senator who purposely insisted on misinterpreting the Constitution.

The myth of the resurrection

Our radio show is going well. This week, we interview UW Philosophy Professor (and my onetime squash buddy) Larry Shapiro about his new book on myth of the resurrection, and we discuss our recent victories and our media campaign.

See Dan Barker in Milwaukee next Friday There’s something to look forward to next week for those of you in the Midwest: Co-President Dan Barker is speaking on Friday, Oct. 21, in Milwaukee on his new book “God: the Most Unpleasant Character in All Fiction.” Be there! Conferences, national media campaigns, public appearances, topical commentary—we are able to do so much, and all due to the support of our members and patrons.

All Articles by this author
PrevPreviousKilling 50,000+ chickens, goats, and Jesus in the name of forgiveness
NextReligious hypocrites grope for excuses for Donald Trump gropingsNext