Skip to content
PrevPreviousWe’re in the middle of a whirlwind
NextPossible Trump appointment could deliver bonanza for Falwell Jr.Next

No letup for us here at FFRF

2017 has not let up for us here at the Freedom From Religion Foundation. 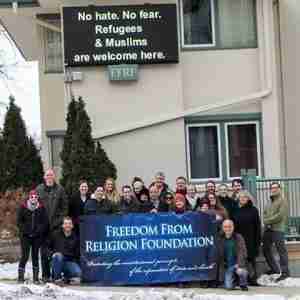 On arriving at the office Monday, we immediately responded to the Trump administration’s new visa rules.

“Under our Constitution, the U.S. government may not impose any religious test for citizenship or immigration,” we said. “As a civil liberties group working to buttress the Jeffersonian wall of separation between church and state, the Freedom From Religion Foundation denounces the executive order as unconstitutional and inhumane. President Trump’s order offends the U.S. Constitution — and basic American values.”

We also posed for a photo in front of our building beneath our marquee that read: “No hate, no fear. Refugees and Muslims are welcome here.”

And the new visa policy was just one aspect of the Trump presidency that had us in frenzied mode. His nominees kept us on our toes, too.

Not fit for education

Trump’s education secretary pick, Betsy DeVos, has been someone we’ve focused on a lot because of her singular unfitness to head a department of such utmost importance. We’ve sent out a number of alerts to our members asking them to contact their senators to vote against her. DeVos’ confirmation seems quite uncertain at this stage, and the sustained citizen action of the type we’ve encouraged can claim a whole lot of credit for that.

And don’t get us started about the work we had to put in due to Trump’s Supreme Court reality show. We actually had four statements fully prepared to deal with each of the predicted top four contenders. So, the moment he made his Apprentice-style announcement, we were ready with our response. “Neil Gorsuch is no friend to the separation of state and church,” said our Co-President Annie Laurie Gaylor. The Washington Post noticed our response. “Liberal faith groups and nontheistic groups including the Union for Reform Judaism, the Secular Coalition for America and the Freedom from Religion Foundation voiced strong concerns about Gorsuch,” it reported. 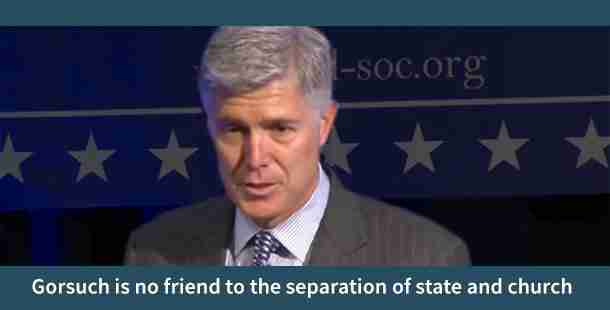 So much to keep us wired

A lot else from our new president kept us keyed up. He attended the annual National Prayer Breakfast event that we decried yet again as breach of the constitutional wall between state and church. (People magazine actually took note of our objection.) And at the gathering, Trump vowed “to get rid of and totally destroy the Johnson Amendment,” which bars churches or other 501(c)(3) tax-exempt groups from endorsing or opposing political candidates. “It is essential for keeping the foundations of our secular republic intact, but the Trump administration and Congress are going after it with all their might,” we warned. (The New York Times this week acknowledged our role over the years in countering this threat to our Constitution.) 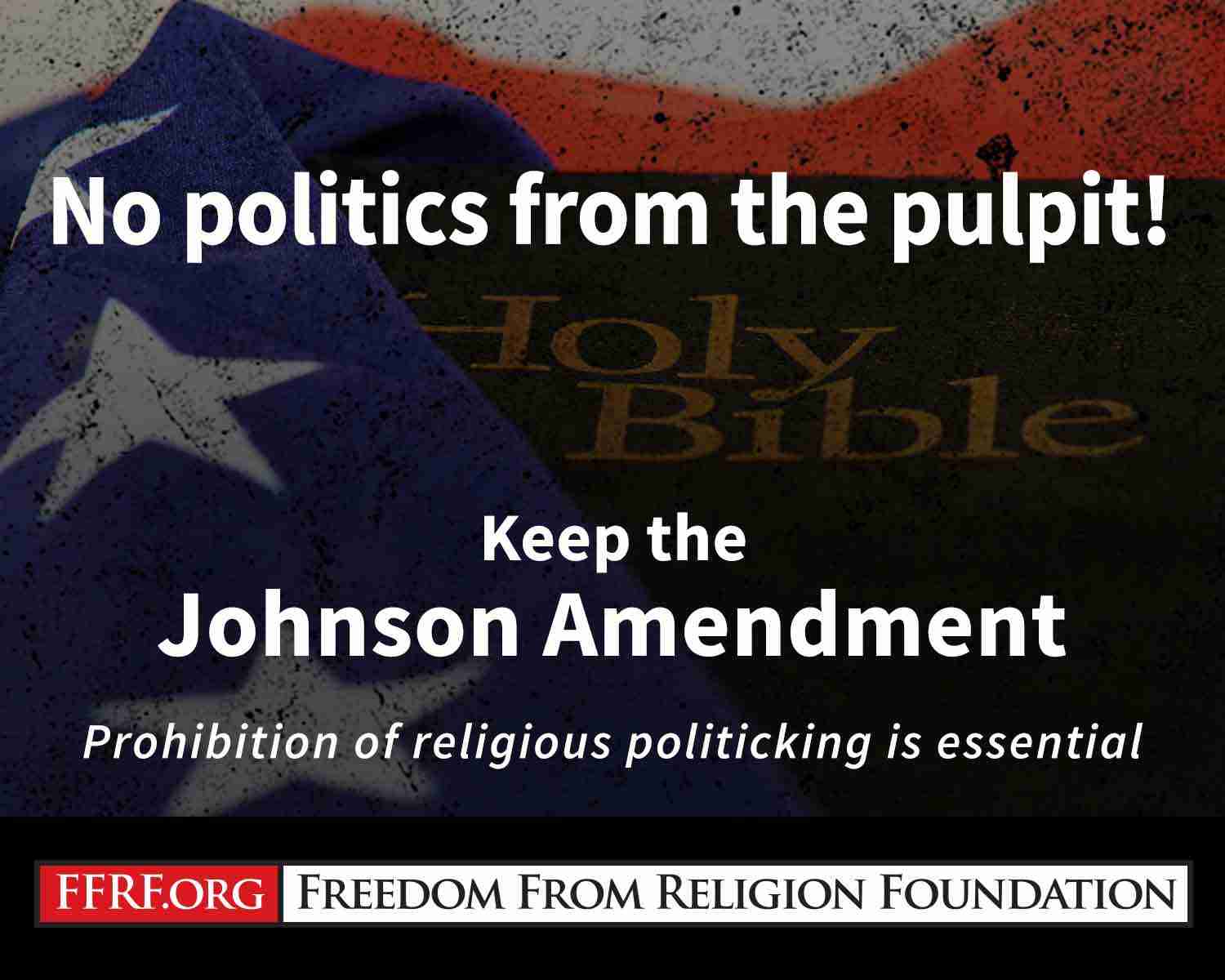 Another disturbing saga this week was a leaked draft of a presidential executive order that promises to permit discrimination and dismantle the Civil Rights Act and other protections — all in the name of “religious freedom.” We dissected the order section by section and vowed that if it comes into effect, we will fight it strongly.

Victories and a joint appeal

Along the way, we obtained a couple of impressive victories, in Indiana over fundamentalist public school flyers and in Illinois regarding staff participation in a school gospel choir. We always aspire to work with fellow like-minded organizations, and we joined in a full-throated appeal with the Center for Inquiry to a Michigan town asking it to remove a cross memorial at a veterans park.

There you have it. It was another hyperactive week for us this year — with all of this activity made possible due to the backing and generosity of our members and supporters.

P.S. On our radio show, we talked about recent political developments and interviewed John Shook, the co-editor of the new “Oxford Handbook of Secularism.”

All Articles by this author
PrevPreviousWe’re in the middle of a whirlwind
NextPossible Trump appointment could deliver bonanza for Falwell Jr.Next