Skip to content
PrevPreviousWe’ll fight like hell — with your help
NextTrump inauguration shouldn’t have a prayer, but instead it’ll be a religious circusNext

Dealing with Trump’s people — and a lot more

The Trump administration has not even assumed control, and it already is keeping our hands full at the Freedom From Religion Foundation.

Standing up for freethinkers We started off the week with a list of questions we sent to the Senate Judiciary Committee for Jeff Sessions, President-elect Trump’s attorney general nominee. We urged committee members to quiz him about his theocratic leanings and his disparagement of nonbelievers. 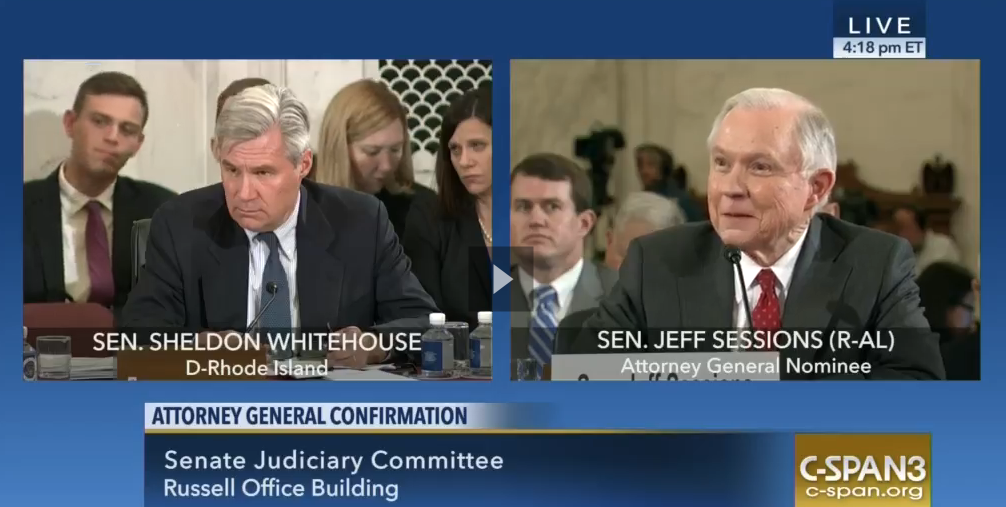 It seems like at least one member of the committee heard us. In an exchange with Sessions and in comments afterward, Sen. Sheldon Whitehouse of Rhode Island drew Sessions out about his belittling of the nonreligious and defended secular folks. As our Co-President Annie Laurie Gaylor said, “Sen. Whitehouse deserves cheers for highlighting and combating this narrow-mindedness.”

Sessions wasn’t the only one we focused on. We also had a list of questions for Ben Carson, the intensely devout former neurosurgeon and presidential candidate who is looking to take charge of our nation’s public housing sector. We urged the Senate to closely scrutinize how his zealotry might affect his leadership.

And then there’s Betsy DeVos, the chosen head of the Education Department. We are intensely concerned about this billionaire advocate for public voucher money flowing to private religious schools, and asked the Senate to firmly cross-examine her. After all, she’ll be shaping our children’s future.

In solidarity with Planned Parenthood

The new Congress has lost no time in attacking Planned Parenthood, motivated by theocratic zeal to attempt (yet again) to defund it. We reminded everyone that the primary organized opposition to reproductive rights in this country always has been religion and affirmed that we stand in full solidarity with Planned Parenthood.

A lobbying guide for you

This is just the start. We know we will have to fight “like hell” in this Trumpian era — and we need your help. So, we have a citizens’ lobbying primer prepared for you. Our Managing Staff Attorney Rebecca Markert put together this extremely helpful guide based on her experience as a congressional staffer. (You can read the slightly longer blog version here that includes fuller anecdotes about the time Rebecca spent on Capitol Hill.)

We will fight on

Alas, we had a bit of a legal setback in a case in a state court in New Jersey when a judge ruled against us — and the state Constitution —in response to a suit we filed against a county handing out taxpayers’ money into the millions for the repair of churches. The judge did give us a shout-out, recognizing “FFRF’s mission and its endeavor to promote a healthy separation of church and state. Without organizations like the FFRF, one check that keeps the balance even disappears.” Thanks … we suppose. We’re confident that the New Jersey Court of Appeals will uphold New Jersey taxpayers’ right to not be forced to fund religion, churches and worship.

This is why we work for state/church separation A corruption scandal in Arkansas vindicated our tireless work for keeping state and church separate when a private religious college we had spotlighted for receiving public funds was implicated in bribery.

Working with like-minded groups We believe in collaborating with like-minded groups, and we were delighted to team up with the American Humanists Association this week in an instance where a Pennsylvania inmate is being forced to enter a religious program as a condition for parole. As Annie Laurie remarked, “It’s more than distressing to see a nonreligious inmate forced either to partake in religious therapy offensive to his conscience, or be punished with continuing imprisonment.”

A legend on our show

A portion of our radio show this week concentrated on, not surprisingly, the Trump cabinet Senate hearings, with FFRF Staff Attorneys Patrick Elliott and Sam Grover on the air to discuss the questions we submitted for various picks. But the centerpiece of the broadcast was an interview we obtained with the legendary British philosopher and humanist A.C. Grayling. Take a listen.

A Facebook chat on Inauguration Day We have a lot planned for the coming weeks. We will have our responses to other cabinet choices, some of whom (such as Energy Secretary choice Rick Perry) we know well from our past skirmishes with them. And on Inauguration Day, we’ll have a Facebook Live chat with Staff Attorney Andrew Seidel, commenting on the gala from a freethinking perspective. 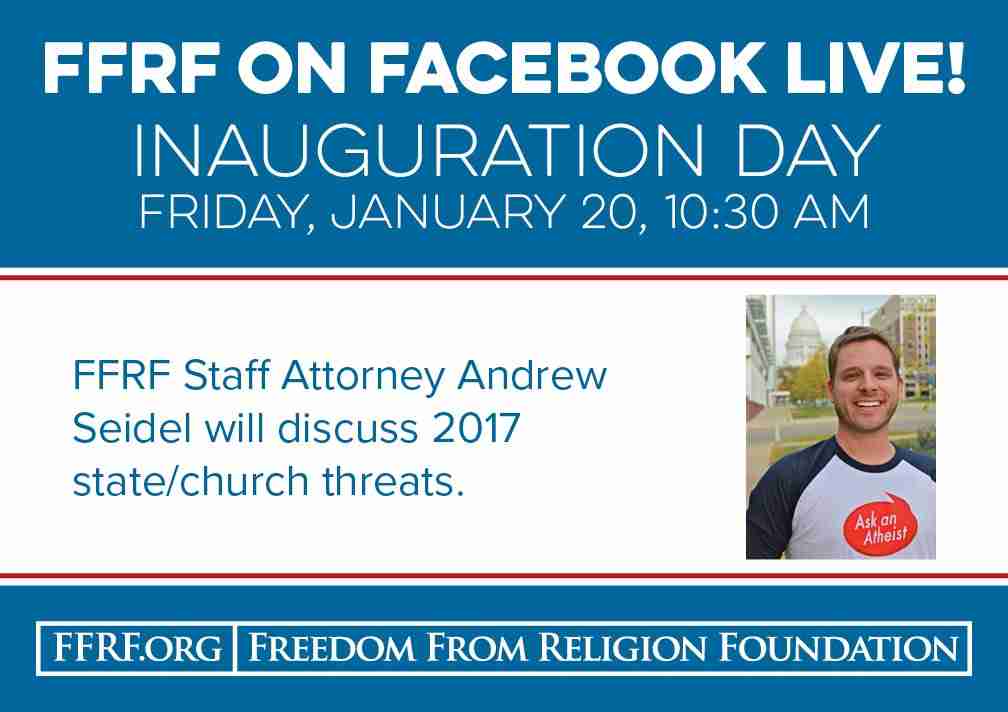 Whew! So much done, and so much to do — all with the help of our members and donors.

All Articles by this author
PrevPreviousWe’ll fight like hell — with your help
NextTrump inauguration shouldn’t have a prayer, but instead it’ll be a religious circusNext