‘Tis the season … for us folks here at the Freedom From Religion Foundation to be hectically engaged in our work. Between our holiday displays and the Bill of Rights, not to mention Trump’s appointments, we’ve been on the go this week. 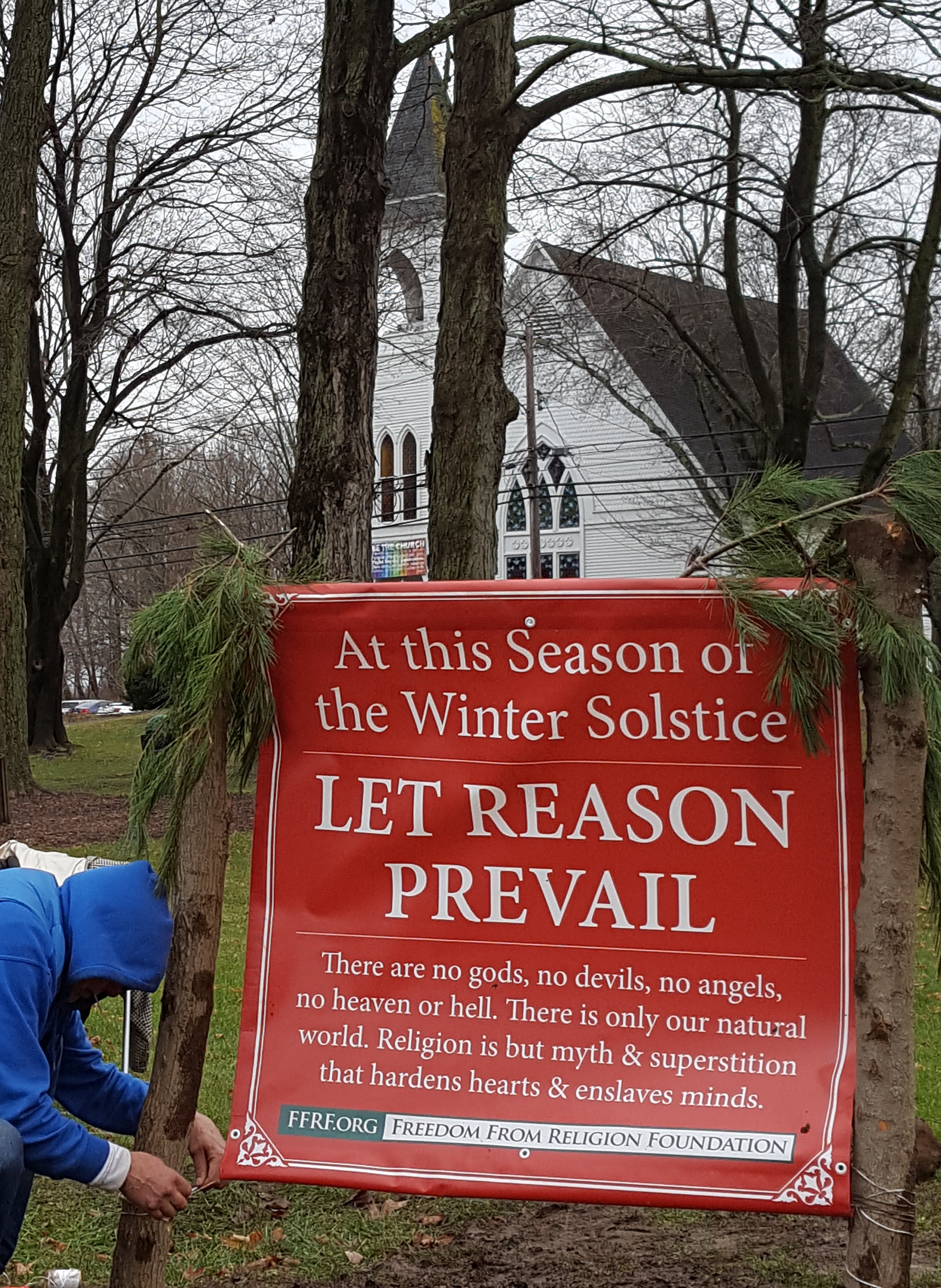 In Michigan, for instance, with the help of our local members, we put up not one but two displays — in the same city! We placed similar signs elsewhere in the country. In Shelton, Conn., three residents installed an FFRF banner in a local park. Our Winter Solstice banner is fluttering in a Virginia public park as a response to a crèche display. And we are proudly set to make our debut this Saturday at the Iowa state Capitol (alerting all Iowans!), again to counter a nativity scene, with the Iowa governor in this instance endorsing the religious exhibit. 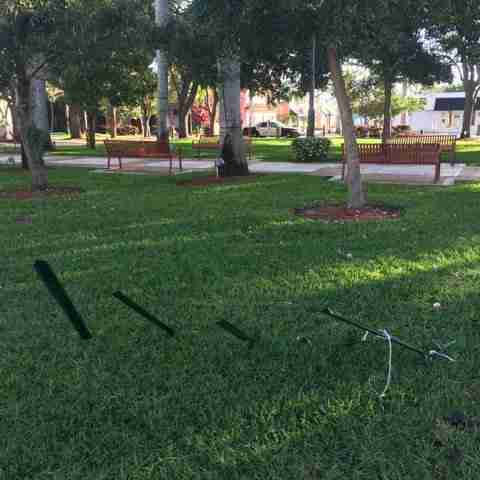 Our displays get the attention of people — and there can be no better proof of this than the ones we put up in Boca Raton, Fla. A sign of ours there first got defaced, and then the replacement banner was stolen. We’ve offered a reward for the perpetrators. (And if you want to donate to help defray the costs of our banners, here’s how you can assist.)

FFRF Co-President Dan Barker explains the reason we take all this trouble.

“We’d prefer to keep public parks and government buildings free from religious divisiveness,” he says. “But if a devotional nativity display is allowed, there must be ‘room at the inn’ for all points of view, including irreverence and freethought.” Placing a warning in the New York Times Our Des Moines display is commemorating the Bill of Rights Day —a date we hold in reverence. So it’s no surprise that our New York Times full-page ad this week had much of the same focus. But it was also super-timely, since it proclaimed: “Washington, D.C., is about to be overrun by zealots.” It featured a prominent image of Vice President-elect Mike Pence pushing aside a portrait of James Madison and warned: “The framers of our secular Constitution knew the only wall we need is between church and state.” It urged New York Times readers to join us, since our work has never been more crucial. 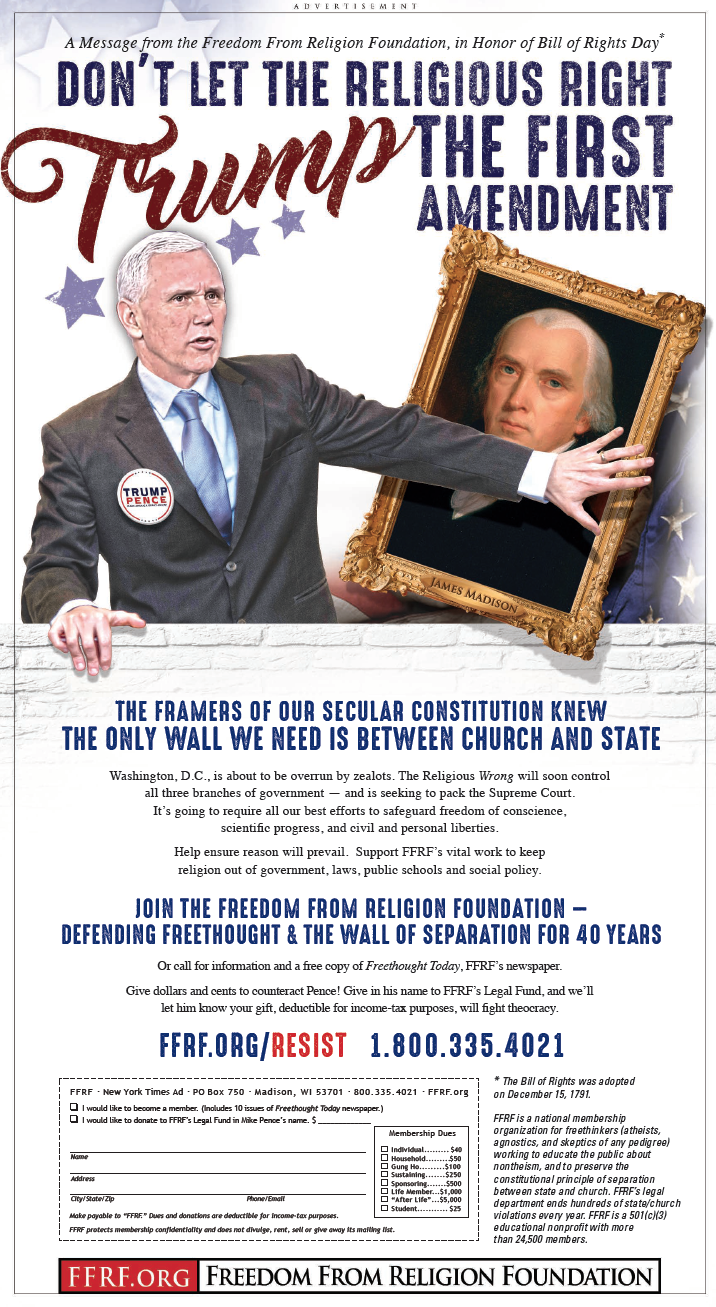 And we’ve also been dealing with Donald Trump’s cabinet appointees. We felt compelled to speak out against his pick of Rick Perry as energy secretary — especially since we knew Perry and his religious dogmatism so well when he was Texas guv.

A number of victories

In the middle of all this, we did our regular thing, too. We had a number of victories to celebrate. “The Wake County school system barred several school choirs from performing at this year’s Apex Christmas Nativity Celebration following a complaint from the Freedom From Religion Foundation,” the Raleigh, N.C., News and Observer reported. In Texas, we actually got a cross removed from a local fire station. And an Alabama school district is going to get training on the Constitution on account of us.

What an attorney general!

We managed to find a bit of time for razor-sharp analysis. Our Staff Attorney Sam Grover shredded the Texas attorney general to pieces for targeting a school that is abiding by the U.S. Constitution.

And we certainly made time to put together our radio show. This week, we celebrate the Bill of Rights and listen to a speech Susan Jacoby made at our Pittsburgh convention in October.

Holiday displays, Bill of Rights, Trump appointees and legal victories — we were able to handle all this simultaneously and so much more, thanks to the support and well wishes of our members and patrons.