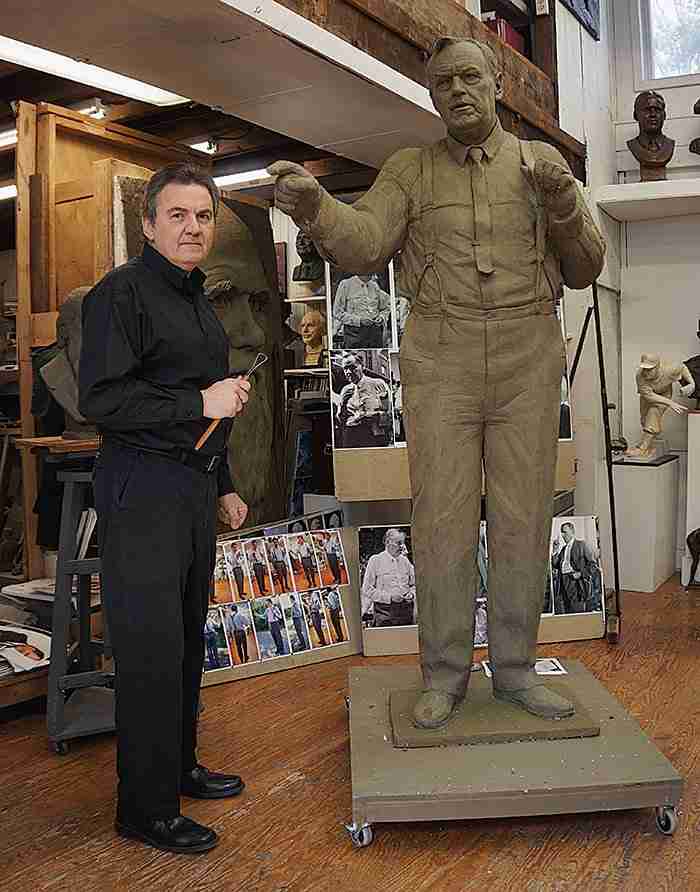 e at the Freedom From Religion Foundation are celebrating this week.

There’s a lot to rejoice about. To begin with, earlier today there was the grand unveiling of a larger-than-life Clarence Darrow statue largely underwritten by us (that means you) at the site of the famous Scopes evolution trial in Dayton, Tenn.

The event received a lot of media attention.

“Among those at the official dedication of the statue Friday morning will be Mr. [Zenos] Frudakis, the artist, and Annie Laurie Gaylor, the co-president of the Freedom From Religion Foundation, an atheist group,” the New York Times reported. “Ms. Gaylor said in an interview on Wednesday that she would come to town holding no grudges. ‘It’s the missing link,’ she deadpanned, ‘in the courthouse display.’”

“A $150,000 statue of Bryan’s rival is about to be installed on the courthouse lawn, mostly funded by the Freedom From Religion Foundation,” the piece said. “Philadelphia sculptor Zenos Frudakis created the Clarence Darrow statue.”

And the big newspaper in the area had a great quote by our co-president.

“This isn’t just an event. This is history,” Dan Barker told the Chattanooga Times Free Press. “This installation of the statue is an historical event in itself.”

We’re glad to be part of — and of service to — history. (And if you’re a movie buff like me, the Darrow likeness will correct the misimpression of him created by a short, silver-haired Spencer Tracy in “Inherit the Wind.”)

Not surprisingly, we focused a lot on the Darrow statue this week. Our main interview on our radio show was with John de Lancie (most famous for playing Q on the “Star Trek” series), who has portrayed Clarence Darrow on stage and was at the statue unveiling. And our “Ask an Atheist” segment dealt with the same subject as the Scopes trial: creationism.

We had other things to exult about, too.

An Indiana school district promised us no more graduation prayers after we contacted it about lotsa praying at a recent graduation ceremony in a local elementary school. We also made sure that there will be no more Christian indoctrination in hunter safety classes in New Hampshire. “We have taken corrective action in the matter, and are reaffirming with all of our instructors that no materials should be distributed in any class other than those which are part of the approved curriculum,” the executive director of the N.H. Fish and Game Department replied to us after we informed him of the constitutional violation. And we were proudly on the triumphant side when a North Carolina appeals court struck down a county board’s prayerful meetings.

We took special pleasure in honoring the winning essayists in our students of color high school contest. We disbursed more than $10,000 in prize money to the deserving victors.

Celebrations down the road?

In other instances, we kept up the good fight in the hope of celebrating down the road. That’s why we took yet another legal step in our case against a Texas judicial official who insists on starting his courtroom sessions with a prayer.

And we delightedly continued our fight against an old adversary. We warned a Georgia county’s recreation and parks agency from organizing a trip to creationist supremo Ken Ham’s ark park and creation museum.

“These theme parks have on display nothing but unscientific balderdash,” Annie Laurie said. “A government agency cannot — and should not — be organizing excursions to such nonsensical creations.”

We engaged in our regular skirmishes, too. We asked an Oregon town to remove a roadside cross. And we insisted that a Minnesota city make sure that a community center is secular.

Whether we’re celebrating, persevering or skirmishing, it’s all because of you. This week made that very clear.