Our mission here at FFRF

The law of the land should reign supreme. That’s our mission here at the Freedom From Religion Foundation.

Sometimes, this mission runs into roadblocks. On occasion, even the U.S. Supreme Court disagrees with us. We then have to engage in a tutorial.

“It has been a bright line rule since America’s founding that the government will not fund religion or the free exercise of religion,” we commented on the recent wrongheaded decision that allows state funding of a religious day care. “Today, the Supreme Court destroyed that rule, claiming that a government funding program that is not open to churches ‘violates the Free Exercise Clause.’ This turns the steadfast rule on its head, admitting that government funds that flow to churches ultimately facilitate religious worship. Never in our history has the government been able to fund religious worship — until now.”

FFRF Staff Attorney Andrew Seidel penned an informative blog explaining what the Trinity Lutheran case is really about — and why we should all be worried by the ruling. 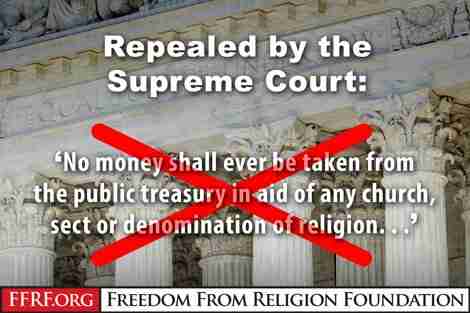 In another spectacularly perverse decision, the state of Arkansas went ahead with the installation of a Ten Commandments plaque on the Capitol grounds. We roundly denounced it (as we simultaneously condemned the vandalism of the monument the day after its installation).

Oh, well. In our line of work, you win some, you lose some. And we did have our share of victories at the local level.

A recent win was over Billy Graham’s daughter, no less. We got a North Carolina sheriff’s office to back off from hosting the less-famous evangelical sibling of Franklin Graham. We also had an Indiana school board stop praying at its meetings.

It’s nice when folks listen to us. Unfortunately, statehouses (and Congress itself) are sometimes harder to convince. Missouri passed a horribly chauvinistic piece of anti-women legislation that we blasted in no uncertain terms, after attempting to stop its passage. And we expressed our dismay at a new Kentucky law that encourages bible courses in schools. “If the Kentucky law results in the imposition of religion onto the state’s public schools, FFRF will not hesitate to push back,” we warned.

And don’t even ask about Congress. Theocrat-loving members of that body are engaging in a surreptitious attempt to undermine the ban on church electioneering. We reminded them of our lawsuit against the Trump administration’s executive order that is attempting the same thing and warned them that we’re watching.

Our trek to Capitol Hill

That’s why it was so important for us to personally make our case on Capitol Hill. This is the reason we recently sent our Staff Attorney Patrick Elliott and Legal Fellow Ryan Jayne to Congress to convince legislators to hold true and fast to secularism. Watch Patrick and Ryan talk to yours truly about their experiences there (and get tips from them on how to lobby effectively).

And we diligently pursued the legal course in our other cases. We appealed in two of our most high-profile recent lawsuits: against the Chino Valley School District in California for its prayers at meetings and against Concord Community Schools for its annual nativity extravaganza. We’re confident we’ll prevail in both.

Our concern for the law extends globally. So, when the Australian police charged a top-ranking Vatican official with sexual crimes, Andrew explained why this gets to deeper legal issues surrounding the Vatican.

On our current video feature, “Ask an Atheist,” we demolish the old canard that it is impossible to be “Good without God.” And on our radio show this week, we interview Stanford neurobiologist Robert Sapolsky about his new book after discussing the Vatican situation and our trip to Washington, D.C.

We engage in so many different pursuits in the defense of the rule of law — and we’re able to do all of it only due to you.