We want folks to adhere to the Constitution

All that we ask at the Freedom From Religion Foundation is that folks adhere to the Constitution. But even then, people sometimes don’t listen.

That’s why we had to take the city of Pensacola to court over a humongous cross in a public park there. On Monday, a federal judge reluctantly decided that we had a point, since (hold your breath!) the Constitution was on our side.

“The city of Pensacola has thirty days to remove the controversial but longstanding cross in Bayview Park, federal judge Roger Vinson ruled on Monday,” a local website reported. “A group of Pensacola residents, represented by the American Humanist Association and the Freedom From Religion Foundation, sued the city in 2016 seeking the removal of the cross, calling its placement on public, government-maintained property unconstitutional. Ultimately, Judge Vinson agreed.” 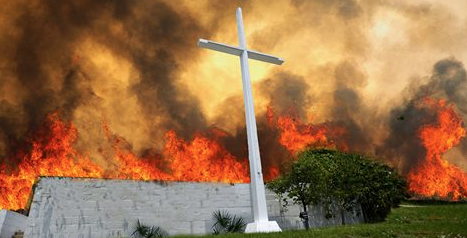 FFRF Legal Fellow Madeline Ziegler lucidly explains the logic of our case in our Newsbite video segment this week.

But though we had logic and the Constitution backing us, the other side had conniptions. Leading religious lights such as Franklin Graham, Mike Huckabee, Sen. Marco Rubio, the Catholic League’s William Donohue and Fox News’ Todd Starnes screamed bloody murder. FFRF Staff Attorney Andrew Seidel forcefully demolished the specious arguments Huckabee proffered on Fox News.

“We don’t care that Huckabee believes in god,” Andrew wrote. “We care that he is using our government to support his belief in a personal god. It’s not about the belief — it’s about using the government to promote that belief. That’s what FFRF is fighting. No amount of Huckabee’s bloviating will stop us.”

The Graham family seems to be keeping us busy. While Franklin Graham was denouncing us, his sister Anne Graham Lotz was getting ready for an event hosted — unconstitutionally, of course — this weekend by a N.C. sheriff’s office. After we objected, the department backed off.

We know that the Constitution also does not allow city councils to organize sectarian prayer unless they let nonbelievers and religious minorities offer alternatives. So, when we learned that the Peoria City Council is flouting our nation’s founding document, we asked it to cease and desist.

And we weren’t too happy when a Minnesota state rep used the Assembly floor to sermonize about Jesus during a tax debate, either. “These proselytizing remarks were completely inappropriate and an egregious violation of the spirit of the constitutional principle of separation between state and church,” FFRF Co-Presidents Annie Laurie Gaylor and Dan Barker wrote her.

We also stopped coach-led prayer in a Kansas school district. “You have my assurance that this will not happen again,” the superintendent promised. We appreciate the pledge.

Texas always takes up a lion’s share of our energy, and this week was no exception. We insisted that a sheriff’s office there remove a cross. (What’s been up with sheriff’s offices around the country?) And we asked a Texas courthouse to take down a blatantly Christian sign (“Trust In The Lord,” with a cross in the middle, no less). 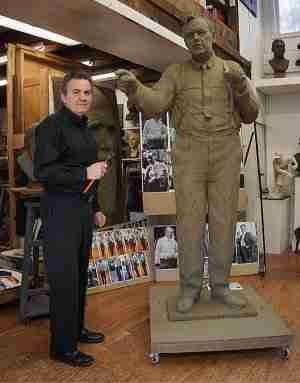 We seem to have a fascination with courthouses recently. We proudly announced the unveiling of a monument built with our funds to freethinker and civil libertarian extraordinaire Clarence Darrow, in front of the Scopes trial courthouse on July 14.

“We’re thrilled to be working with an internationally known sculptor in making this gift, not just to Rhea County and its historic courthouse, but to posterity,” the local paper quoted Annie Laurie as saying. “This magnificent statue of Darrow will enhance Rhea County’s history, and be a draw for generations to come.”

Needless to say, the Darrow statue has been made possible only due to your backing and generosity — as is everything else we do.

P.S. After Madeline discusses the Pensacola case, Pulitzer Prize-winner Frances Fitzgerald appears on our radio show to talk about her recent magisterial overview of the evangelical movement. And you can catch Annie Laurie, Dan and FFRF Staff Attorney Elizabeth Cavell reveal what the bible really says about abortion on our weekly Facebook Live video feature, “Ask and Atheist” (archived for viewing on YouTube).

All Articles by this author
PrevPreviousOn Fox News, Huckabee bungles the Constitution and Pensacola Cross
NextPlaygrounds or proselytizing: What was the Trinity Lutheran case really about?Next