Ask not what all we do during the course of a regular week at the Freedom From Religion Foundation to make the world a more secular and rational place.

So, in the aftermath of the buzz we created with our lawsuit against President Trump’s executive order allowing church electioneering, we thought it necessary to explain our reasons for going after his administration when some other similar groups didn’t. We’re sure you’ll be convinced.

And if you aren’t yet, we have an entertaining yet informative short video for you, the second in our “FFRF Newsbite” series. See how FFRF Staff Attorneys Sam Grover and Andrew Seidel break our Co-President Dan Barker’s pencil to stop him from endorsing political candidates.

Incidentally, Dan had an eventful week, with secular icon Richard Dawkins citing him and his recent book “GOD: The Most Unpleasant Character in All Fiction” in a defense of blasphemy (more on that later).

Along with persuading the general public, our aim is to change minds in Congress, too. That’s why Sam and Andrew submitted testimony to our hallowed legislative body about Trump’s executive order and its possible odious effects.

And the Trump lawsuit hasn’t been the only one keeping us busy. In a case we filed against a county last year challenging a very Christian Pennsylvania county seal and flag, we recently entered a motion for a summary judgment. We just keep at ’em. 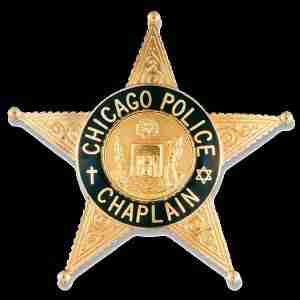 Cut it out, Chicago!

We also told the police department in the metropolis down the road from us to cut it out.

“The Freedom From Religion Foundation claims that several events run by the Chicago Police Department promote religion and have to end immediately,” writes Hemant Mehta in his popular Friendly Atheist blog. “FFRF is asking for assurances all of these problems will be resolved. If they’re not, the CPD could face a lawsuit.”

Other errant local bodies haven’t escaped our gaze. We’re warning a Virginia county about displaying a recently unveiled religious edict in the county courthouse. And we’ve upbraided a Florida city commissioner for the totally disrespectful way he treated a secular invocation by a board member of our local chapter.

Changing hearts and minds is a battle we wage on many fronts. One arena in which we’ve been pioneers is using billboards to propagate our secular message. That’s why we teamed up with our Colorado Springs chapter to put up a couple of timely boards. “The only wall we need is between church and state,” reads one. “Vouchers hurt our public schools,” says the other, with an iconic backdrop of Pikes Peak. 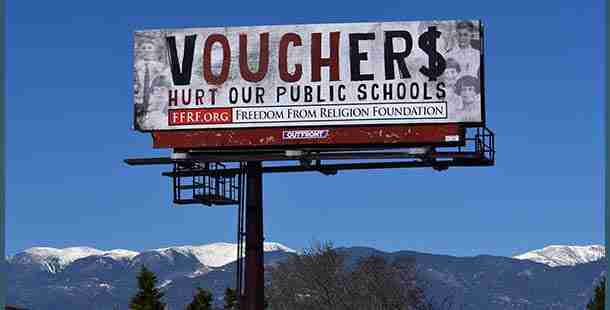 Another way for us to get the message out is to speak with the media. Two of our staffers were recently interviewed for an online lengthy story on young women and atheism.

“Millennial women want autonomy over their own bodies,” says Lauryn Seering, our communications coordinator. “They recognize that all the arguments against this autonomy (contraception, birth control, marriage) are religiously fueled.”

“She grew up in a Catholic household but has always been skeptical of the ‘invisible man in the sky’ who tells people what to do,” states the piece. “The 23-year-old Hanson, like many atheists, finds that questioning faith and religion makes people wonder if something is wrong with her womanness.”

We aren’t confined to our shores

But our struggle for a better world is not confined to our shores. That’s the reason we tackled blasphemy in the Muslim world and in the West. We decried a death sentence imposed on a Saudi atheist and a blasphemy investigation against celebrity Stephen Fry. (And please add your voice to ours in asking for the reversal of the Saudi death penalty.)

We do whatever we can do to make our world more secular and sane — and all of it with your support and beneficence.

P.S. Our radio show this week has an interesting discussion with Anthony Pinn, the author of a new book on humanism and racial diversity, in addition to a chat with Irish atheist Michael Nugent about the Stephen Fry blasphemy case.