Skip to content
PrevPreviousCounterbalancing Easter is no easy task
NextThe Facts vs. The O’Reilly FactorNext

We’re tanglin’ and tusslin’ on your behalf

On your behalf, we tangle and tussle every week with a range of characters.

So, this week we took on Texas Gov. Greg Abbott, who’s made the mistake of messin’ with us and is now trying to hide. After getting our secular display thrown out of the Capitol, he has filed a protective order to avoid being deposed in our censorship case against him. He claims to lack personal knowledge of the incident. Since he tweeted at the time, “Mocking the Capitol Nativity Scene is Offensive. I Demand Removal of Satirical ‘Nativity Scene’ from Capitol,” this seems highly illogical.

And because we were ready to scuffle some more, we also challenged our commander in chief — make that panderer in chief. When President Trump proclaimed the United States “a nation of believers,” we called him out on it.

“The president spoke to an American public that includes many atheists, agnostics and freethinkers,” we said. “His refusal to acknowledge our presence or contributions to building this nation is shameful.”

Our gaze was not just focused on the bigwigs. When we noticed a local violation in our home state, we got it rectified.

“A police station in Wisconsin has removed a ‘Police Officer’s Prayer’ display after the nation’s largest secular legal organization filed a complaint that argued the display makes non-Christians feel like ‘outsiders in their own community,’” the Christian Post reported somewhat grudgingly. 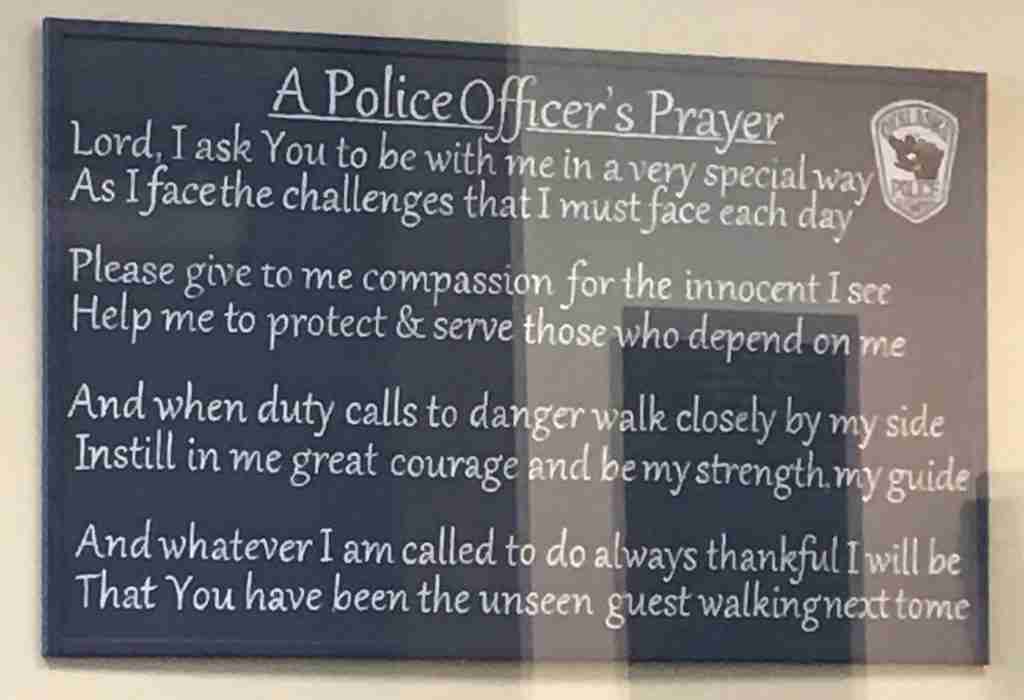 We earned a victory a bit further down south, too. We sent letters very recently to 15 school jurisdictions in Missouri warning them not to use an extremely faulty, religion-based sex-ed curriculum. A Missouri school district has already heeded our advice. “The district will halt use of outside consultants with respect to sex education instruction to further review curriculum, effective immediately,” the superintendent wrote to us.

And deep in the heart of Texas, we blew the whistle when an evangelical ministry was repeatedly allowed access to students in a school district.

“In United States v. Lee, the Supreme Court extended the prohibition of school-sponsored religious activities beyond the classroom to all school functions,” Grover wrote. “Thus, promotion of Go Tell Ministries’ ‘crusade’ event as part of an in-school assembly violates the Establishment Clause.”

Sometimes, the problem may be an individual teacher, and even that doesn’t escape our notice. When a high school math teacher in Indiana engaged in multiple violations of the Constitution, FFRF Legal Fellow Ryan Jayne urged the school district to place a curb on his activities.

Taking on state after state

And state legislatures, as you must know by now, are a favorite of ours to grapple with. We (yet again) organized opposition to an appalling bill in Alabama that will give a church the license to form its own police force. We asked our Tennessee members to urge the guv to veto a religious school bill. The Oklahoma Senate is once more (definition of insanity?) trying to get the Ten Commandments installed in public places, and once more we’re trying to stymie the impulse. And when our home state started considering a bill that will grant exemption from car insurance to religious entities, we warned of a constitutional collision (with Grover testifying against the bill in person at the Statehouse.)

On our radio show this week, we talked about some other tangles and tussles: FFRF Co-Presidents Annie Laurie Gaylor and Dan Barker and FFRF Staff Attorney Andrew Seidel flashed back to their appearances on Bill O’Reilly’s show, and Seidel spoke about his ongoing war of words with Ark Encounter creator Ken Ham. Then, we interviewed Ishmael Jaffree, a Supreme Court victor and freethinking legal pioneer.

A special note for those of you in the Northwest: Dan Barker is in your neck of the woods! He has multiple speaking engagements in Washington and Oregon starting this evening. Walk, run, ride or drive to see him.

We’re able to engage in our constitutional tangles and tussles — and the more pleasant aspects of our work — all because of your kind support.

All Articles by this author
PrevPreviousCounterbalancing Easter is no easy task
NextThe Facts vs. The O’Reilly FactorNext