Sherlock Holmes, lost iPads, and the importance of open atheism 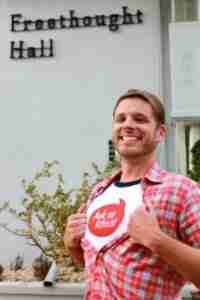 He rushed into the locker room, coats and scarves flying behind him. I was stripping off six layers of clothing — to help fend off the sub-zero winter we’re suffering in Wisconsin — when the man ran to the half-open locker near me. He reached in and pulled out an iPad. As the only other witness, his wide eyes looked to me, “I left it in there yesterday.” Amazed, he said, “God is good.” To which I responded, “I guess people are too.”

He was momentarily stunned, but then gave a small smile and nod before walking happily away. Perhaps it’s wishful thinking on my part, but maybe, just maybe, my response slipped through “the armor of God” — his faith.

My response was not a devastating argument for humanism or atheism. It’s not even atheism. I was simply unwilling to let a bad religious idea remain unchallenged.

This was a little thing. But Sherlock Holmes and I are a bit alike, because, like him, “It has long been an axiom of mine that the little things are infinitely the most important.” (Conan Doyle himself was, oddly given his most famous character’s need for evidence, a spiritualist. ) I’ve often spoken about how important it is to challenge small violations of the First Amendment because they lead to larger violations. Well, small cracks in the armor of faith lead to doubts, curiosity, questioning, and atheism, if the person has the intellectual honesty to continue questioning or receives enough outside information.

No matter how small the interaction, no matter how short the time, and despite your state of undress, it’s worth pointing out where religion is wrong. There are good and bad ways of doing this, and if you want to know the best way, you really ought to read Peter Boghossian’s book, A Manual for Creating Atheists. Notice that I did not respond, “There is no god and you’re stupid for believing in one.” I undermined the entire premise of a good god simply by giving credit where it was due and encouraging that gentleman to do the same. People are basically good, that’s why your iPad is still there.

Maybe this won’t do anything. Maybe tomorrow on the news he’ll see someone thank god for helping them beat cancer and he’ll agree. But maybe he’ll think about the doctors instead. One thing is certain: If we don’t speak up, nothing will ever change. You have a voice, and you have to use it.

Andrew L. Seidel is a constitutional attorney and the Director of Strategic Response at the Freedom From Religion Foundation. His first book The Founding Myth: Why Christian Nationalism Is Un-American was burned by a Tennessee preacher. His second book, American Crusade: How the Supreme Court is Weaponizing Religious Freedom, is due out in 2022. He's won numerous academic awards and holds two law degrees: a J.D. magna cum laude from Tulane University Law School and an L.L.M. from Denver University’s Sturm College of Law. Andrew has a B.S. in neuroscience and environmental studies from Tulane. Before dedicating his life and law degree to keeping state and church separate, Andrew was a Grand Canyon tour guide and an accomplished nature photographer. Andrew has appeared on Fox News to debate Bill O’Reilly, MSNBC, and hundreds of other media outlets speaking on behalf of FFRF.
All Articles by this author
PrevPreviousGuess Who? State Judge says Sharia Law trumps Constitution
NextLiberty Institute awards FFRF ‘blue ribbon’Next