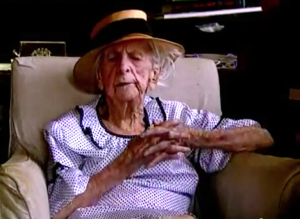 April 7 marks the 128th anniversary of the birth of Florida environmentalist Marjory Stoneman Douglas. Over the last few months, this name has been uttered gravely on news reports and splashed over social media in the wake of the recent tragic shooting at the Marjory Stoneman Douglas High School in Parkland, Fla. But who was she?

Before women had won the right to vote, before there was an Earth Day, and before “atheist” was a common (non)religious identification, Marjory Stoneman Douglas was a freedom-fighting freethinker who essentially singlehandedly saved the Everglades.

“The soul is a fiction,” Douglas once wrote. “I think death is the end, I believe that life should be lived so vividly and so intensely that thoughts of another life, or of a longer life, are not necessary.” 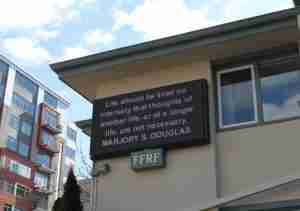 And squeeze the nectar out of life she did. Born in Minnesota in 1890, Douglas lived to age 108 (to the envious admiration of FFRF Co-President Dan Barker), and left behind, when she died in 1998, a legacy as one of the most vigilant environmentalist writers and civil rights activists of the 20th century.

Douglas was educated in Massachusetts, where she earned a B.A. at Wellesley College. After graduating in 1912, Douglas served in Europe during the First World War with the American Red Cross. Following a brief and unfortunate marriage, Douglas made a break for the southern tropics. She traveled by train to a tiny fishing and rumrunner village in Florida called Miami in 1915, where she stayed for the rest of her life as it transformed into a major cosmopolitan city.

In 1916, before the passage of the 19th Amendment giving women the right to vote, Douglas and three others — including Mrs. William Jennings Bryan — argued before Florida state legislators for women’s suffrage. Douglas went on to devote herself to writing and environmental conservation, dedicating five years to her groundbreaking book, The Everglades: River of Grass (1947). The book was an instant best-seller and a battle anthem for preservationists, transforming the view Americans had of wetlands as well as the relationship between Florida citizens and the Everglades. Douglas spent the rest of her life advocating for the Everglades, which was established as a national park in 1947. She founded the environmental activist organization Friends of the Everglades in the 1960s and led the group for three decades. Her work for the national wetlands led President Clinton to dub her “Mother of the Everglades” in 1993 when he ceremoniously honored her with the Medal of Freedom in Washington. (She was posthumously inducted into the National Wildlife Federation Hall of Fame in 1999 and the National Women’s Hall of Fame in 2000.)

Douglas built herself a home in 1926 in Miami’s Coconut Grove, which by the late 1960s, became something of a mecca for bohemians, intellectuals and Southern counterculture. The pioneering environmentalist inhabited a small, English-style cottage swathed in a tropical, verdant jungle. She lived without a car, a driveway, air-conditioning and television. The little cottage was bequeathed by Douglas to the state of Florida to be used as a memorial and mini-museum of her life and work.

According to FFRF member Alvin “Dub” Rankin, who was one of Douglas’ students at the University of Miami, Douglas — at nearly 80 years old —  lectured standing up in a voice “only slightly less less resonant than Julia Childs” in her signature floppy hat. Rankin wrote in a 1998 issue of Freethought Today of an eye-opening discussion between himself and Douglas after class one night on the topic of religion.

“You know, humans’ learning how to plant and grow food was probably the very beginning of religion,” she surmised, “because seeds looked like dead, inanimate objects and yet they became alive when planted in the ground. So, man started burying his dead family and friends and this became the origin of belief in life after death.”

Today, I don’t regard those thoughts she shared with me as anything very remarkable, but at that stage in my young life, her words were absolutely profound. It was my first revelation that religion was probably invented by man and not by a deity in the sky.

In her 1987 autobiography, Marjory Stoneman Douglas: Voice of the River, she wrote that she did not believe in the existence of a soul and discussed the evolution of her spiritual beliefs — and lack thereof. Although she grew up in a church-going household, Douglas revolted against the idea of religion and later against all the popular concepts of God, after her mother suffered with cancer for years.

“Since college, I hadn’t known any concept of God that I could understand or adhere to,” Douglas wrote, “Of course, there are different concepts for God. There’s that concept of God as a kind of Santa Claus, the giver of every good and perfect gift. Another concept is that of Eastern potentate, who must be praised and flattered in order for one to get what one wants from him. That’s an aspect of God I particularly dislike.”

Officially, Douglas defined herself as an agnostic. In her autobiography she described her nonbelief in the concept of a soul:

The soul is a fiction of mankind because mankind hates the idea of death. It wants to think that something goes on after. I don’t think it does, and I don’t think we have souls. I think death is the end. A lot of people can’t bear that idea, but I find it a little restful, really. I’m happy not to feel I’m going on. I don’t really want to. I think this life has been plenty. It’s just about all anybody could take, really. I’m cheerful about the feeling the end will come — let it come.

She explicitly insisted in her Last Will & Testament that there be no ceremony of a religious nature when she died. Her wishes were honored and her cremated remains were scattered over her treasured Everglades.

Learn more about Douglas and other freethinkers.

All Articles by this author
PrevPreviousWhen a major Supreme Court victory is just the beginning
NextNo lordy, no lordy, look who’s turned 40!Next