I’m enjoying the thrill of watching on MSNBC the commercial Ron Reagan so generously recorded for the Freedom From Religion Foundation. 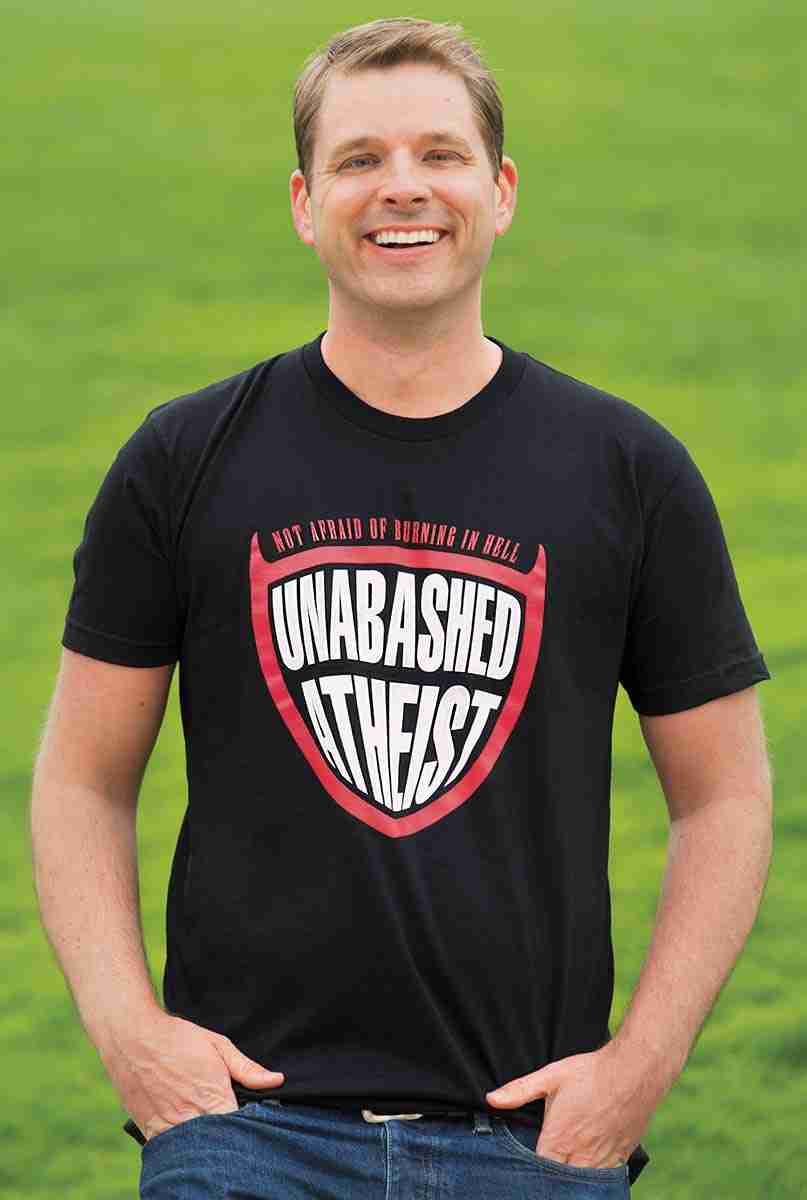 The ad famously features the son of President Ronald Reagan and Nancy Reagan, always an admirably independent thinker, encouraging viewers to join FFRF. Ron irreverently signs off: “unabashed atheist, not afraid of burning in hell.” Ron’s signature line is so popular we’ve now have reproduced it on a T-shirt and a lapel pin.

We would have run the ad on MSNBC sooner, but the network had previously refused it, along with national ABC, NBC, CBS and Discovery. But hey, we’re not bitter — it’s wonderful at last to have our expensive “free” speech moment on MSNBC!

“Morning Joe” was our first MSNBC experiment, since we are cognizant that our new president reportedly watches the early morning program. But we had always intended the commercial to run on our favorite: “The Rachel Maddow Show.” Maddow herself once recorded a radio spot for us back in the good ole days when she and FFRF’s radio show, “Freethought Radio,” were both on the Air America network.

Maddow’s ratings fortuitously began to go through the roof about the time our occasional ads started in March. The last scheduled run for now is tonight and Thursday. As we raise more funds, we hope to continue the ads, since the response has been outstanding.

Part of the power of the commercial is as a trailblazer. Many Americans still have never knowingly met an atheist or agnostic, much less seen one in a positive commercial. Much of the frisson of this ad, of course, is also due to the fact that FFRF has found such a credible and well-known spokesperson to do a celebrity endorsement — and that he happens to be the son of America’s most famous modern Republican president! But some of the amazement appears to simply be that we nonbelievers have the wherewithal to advertise on national TV!

We’ve also been running spots on CNN’s late afternoon/early evening programming, during office hours. CNN attracts an audience that is a more representative cross section of America than MSNBC. And so, not surprisingly, those spots generate more controversy. The “haters” are usually the first to call, instantly, to express their (often obscene or vulgar) incredulity that FFRF and atheists dare to advertise our existence. The CNN responses pour in heavily for about two minutes after the ad runs, lighting up our phone screens, then petering out. As our staff frantically tries to efficiently get contact information from one caller and move to the next, we’ve been thwarted by callers who don’t initially indicate whether they’re friend or foe, only to snarl after a pretense of interest in FFRF: “You will go to hell.”

I’ve even taken a few calls from liberal religionists who claim the ad is “hurtful” because it attacks belief in an afterlife. Our ad, of course, does not mention the possibly more benign concept of heaven. It gently and laudably tweaks belief in a place of everlasting punishment and excruciating eternal torture. How can any moral person want to believe in a hell? Yet the fear of offending such primitive and retributive belief is what has gotten our ad and Ron’s views censored on a national scale. (And perhaps the network agents have read the statistics: Pew Research shows 58 percent of Americans believe in hell and 72 percent believe in heaven.)

After viewing our ad on CNN yesterday, a man called, his volume rising word by word: “I’ve seen that man in your ad say he’s not afraid of burning in hell. Ask him if he’s afraid to burn on this Earth.” Then he screamed into my ear: “ATHEISTS LIKE YOU HAVE FUCKED UP OUR NATION!” Our receptionists deserve a lot of credit for putting up with the cranks!

But the flipside is that the CNN ads can elicit some of our nicest phone contacts.

After being screamed at, it was lovely to pick up the phone and take a call from Naomi of Philadelphia, who said she was “absolutely impressed and rather dumbfounded” to view our commercial. She said she and her husband “are lifelong atheists, and so were my parents.”

Alvin from Chicago exclaimed about Ron’s ad: “Wow!” I promised to send him a brochure about FFRF and a complimentary copy of our newspaper, adding that I hoped he’d like the information and join us. He warmly replied, “I certainly will!”

An elderly man from British Columbia asked me, “Have you met Ron Reagan?” I was a little concerned he was one of those callers who thought I was going to put him through personally to Ron. But when I told him I’ve been lucky enough to briefly meet Ron, he responded: “Tell him that is the coolest commercial I’ve ever seen!”

Then there’s my favorite response so far this week: from Shirley, who belongs to a little town in California. She identified herself as 94 years old, an ex-Mormon who became a nonbeliever at age 8, about the time Ron did, too.

“You don’t need to go to church or have someone tell you that you might go to hell in order to be a good person,” she said. “I deeply believe in a way of life, not a religion. I admire Ron Reagan for standing up for what he believes in. I’m as agnostic as hell.”

“I am so tired of Congressmen waiting for God to solve their problems for them!” she added. “I like to listen to other people’s opinions. I really do. I just don’t like to be told if I don’t follow their path, I’ll go to hell.” (Since FFRF is a nonpartisan group, I won’t add what she said about the person she says she refers to as “the Rump.”) When I told her that octogenarian and nonagenarians are FFRF’s best members (as they grew up in an era that revered separation of church and state), Shirley replied, “You have to live a long time to get your mind around religion.”

This is not FFRF’s first TV commercial, by any means. My mother Anne Gaylor, as the principal founder, managed to get local airtime for our first ad as early as 1978, billing the one-minute spot as “the first atheist TV commercial.” It led to national news and TV stories, including an invitation to appear on Tom Snyder’s national TV show, “Tomorrow,” in 1978, two years after FFRF was founded and the year it went national. (For young ’uns, that show was a very hip late night talk show on NBC that immediately aired after Johnny Carson’s “Tonight Show.”) My write-up about the experience, which appeared in The Daily Cardinal, a student newspaper at the University of Wisconsin-Madison, is reproduced for your entertainment at the end of this blog. (Pay special attention to what I clearly considered the decadent cost of living in L.A. back in 1978.)

People who viewed the program from all over the country phoned the official FFRF phone number (then my parents’ home number). And several even managed to track down my number in my student apartment. (Admittedly, a few were not genuine membership prospects but overly friendly neighborhood atheists in an era when you didn’t see many non-actress young women on TV.)

But I remain as excited today as I was back in FFRF’s very early days to answer phone calls from well-wishers and kindred “non-spirits” interested in joining the Freedom From Religion Foundation. As I learn something about them, I feel not just a sense of affinity but also of affirmation that so many kind, intelligent strangers care enough to want to band together to fight for our secular government, for reason to prevail . . . really, for the Enlightenment. And, like Ron Reagan, maybe poke a little fun at dogma while doing it. If you’d like to help us keep FFRF’s Ron Reagan commercial on TV, please click here and choose the advertising fund designation. Your donation is deductible for income tax purposes and will be gratefully accepted. 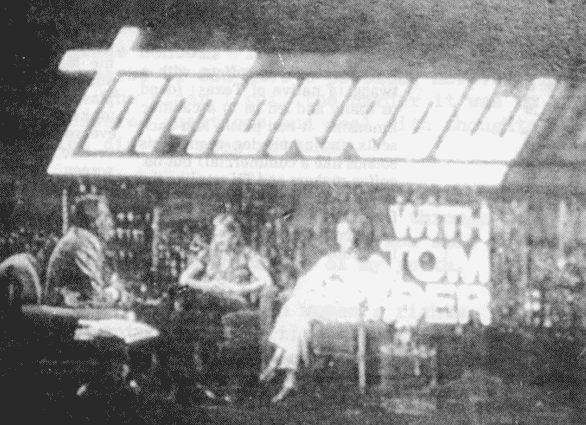 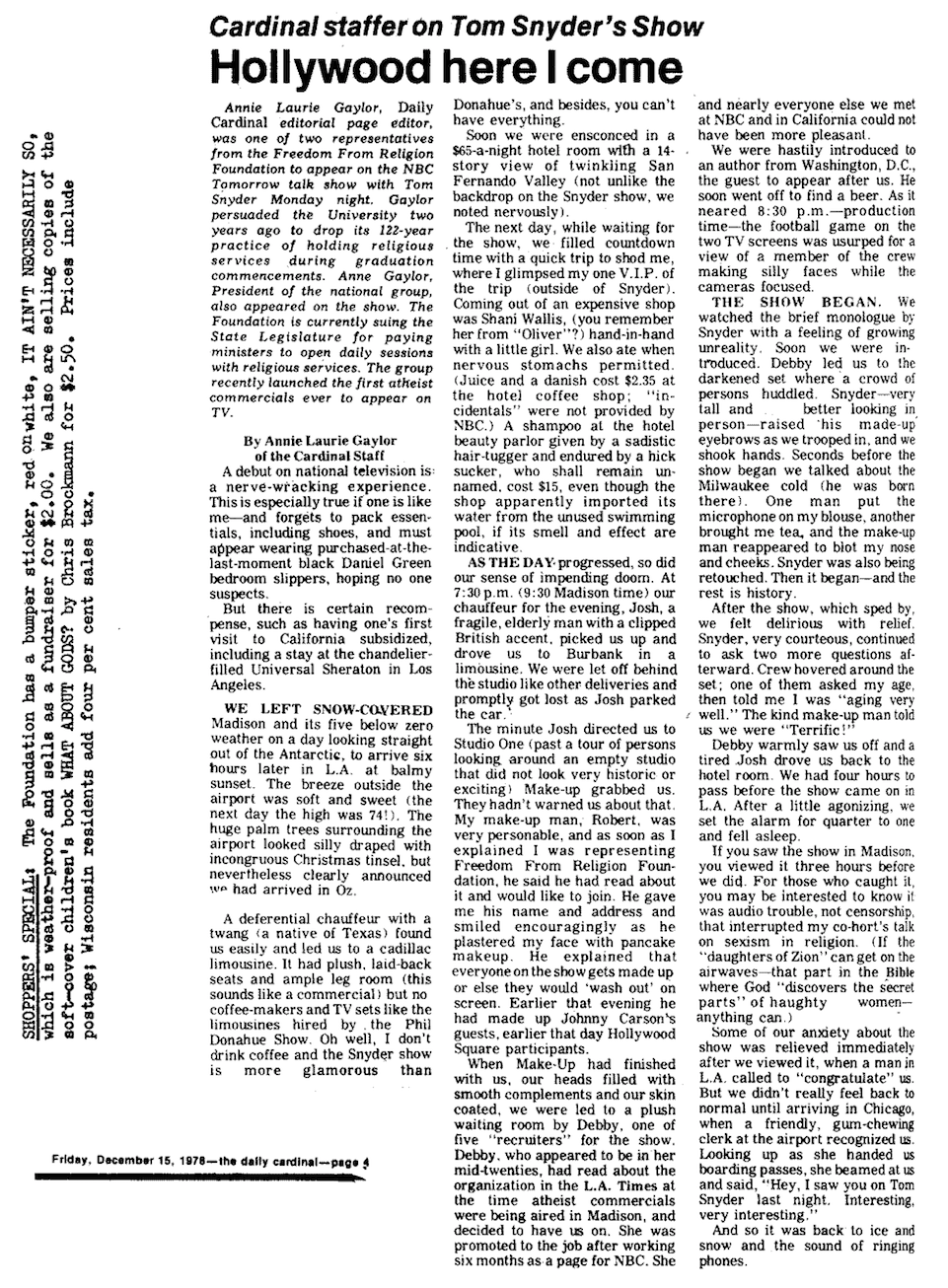 Annie Laurie Gaylor is co-president of the Freedom From Religion Foundation. She co-founded FFRF in 1976 as a college student with her mother Anne Nicol Gaylor. She served as the editor of FFRF’s newspaper, Freethought Today, from 1985-2009. She became FFRF co-president with Dan Barker in 2004. Annie Laurie has authored three books for FFRF: Woe to Women: The Bible Tells Me So; Woe to Women: The Bible Tells Me So; and Women Without Superstition: “No Gods – No Masters”, the first anthology of women freethinkers.
All Articles by this author
PrevPreviousDefending the Passover slaughter proves Hitchens right: Religion poisons everything
NextN.C.’s preaching politician seeks to overturn marriage equality, impose God’s lawNext