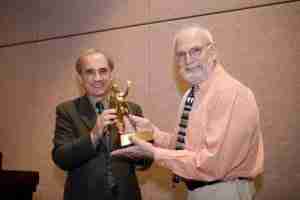 The world was saddened to learn Sunday morning of the death of neurologist and author Oliver Sacks, 82, in Greenwich Village, New York City. The Freedom From Religion Foundation is particularly grieved to have lost this charming freethinking raconteur and friend who was an FFRF Honorary Director.

Although raised Jewish, Oliver Sacks lived and died as a nonbeliever. When he accepted the Freedom From Religion Foundation’s “Emperor Has No Clothes” award in 2005, he described himself as “an old Jewish atheist.” In his 2005 letter agreeing to accept the award, he wrote:

“I am entirely with you on the crucial separation of Church (or Mosque or Synagogue) and State, and am much disturbed (as sane people must be) by the current and VERY dangerous confusion of these — a confusion Spinoza warned about, more than 3 centuries ago in his Tractates Theologico-politicus. I am also strongly against Creationism, Intelligent Design and pernicious nonsense like this, which constitutes a sort of parody of Science, and is, increasingly, forced upon schoolchildren and others. It seems to me almost incredible (and very ominous) that eighty years after Scopes, and nearly 150 years after Darwin, that such Unreason can still be rampant.”

During his acceptance speech, “Invasion of Irrationalism,” he said:

“What concerns me is the invasion by religion of our schools, our politics, and our science. This is why I said ‘yes’ to Dan when he invited me to receive this award, and why I am here now.”

Oliver Sacks’ absence leaves an emptiness in the world, a void that hit me in the stomach when I learned that our friend and teacher is no longer with us. Sacks wrote about this feeling himself:

“I have been increasingly conscious, for the last 10 years or so, of deaths among my contemporaries. My generation is on the way out, and each death I have felt as an abruption, a tearing away of part of myself. There will be no one like us when we are gone, but then there is no one like anyone else, ever. When people die, they cannot be replaced. They leave holes that cannot be filled, for it is the fate — the genetic and neural fate — of every human being to be a unique individual, to find his own path, to live his own life, to die his own death.” (New York Times, Opinion, “Oliver Sacks on Learning He Has Terminal Cancer,” Feb. 19, 2015)

I remember meeting Oliver Sacks for the first time when he flew down to Orlando, Florida, to receive his award at our annual convention there. We lunched together in the hotel’s restaurant, which was somewhat noisy. Oliver was a bit hard of hearing, and when I asked him what he thought of the hypothesis that music is an outgrowth of the brain’s need to understand vowel sounds, he looked at me like I was crazy. Then he laughed, and said, “Oh. I thought you said ‘bowel sounds.’”

In the years since then, Annie Laurie and I were privileged to spend time with Oliver in New York City. He surprised Annie Laurie by showing up at Molyvos Greek restaurant one evening (I knew he was coming) to regale us with fascinating and funny stories of science, the brain, and his childhood—even though a car accident on the way to the restaurant (not his fault) had brought on a migraine (endearingly pronounced the British way, “me-graine.”) It was during that dinner in the dark restaurant as he grabbed a magnifying glass to read the menu that we learned he had eye cancer, which ultimately resulted in the loss of one eye, and ultimately, his life.

Later, on another trip with our teenage daughter, we visited his Greenwich Village office where he showed off an early LED desk lamp, then sampled memorable sushi together at one of his favorite restaurants down the street. Always gentle, he took pains to draw out our quiet daughter and commiserate over her migraines. He handed Sabrina two identical size bars of metal, one aluminum and one tungsten, and asked her to describe the difference. He then drove us in his car to Carnegie Hall (quite an adventure in itself, with his partner Billy doing the navigating). We would later learn in his book The Mind’s Eye that not only did Sacks suffer from prosopagnosia—he couldn’t recognize faces—but his disability extended to not recognizing streets! Good thing he had a navigator! From center box seats in the first balcony at Carnegie, we heard David Randolph (life-long atheist and FFRF member) direct the St. Cecilia Chorus (a secular group) performing Mendelssohn and Orff, and on another occasion, Handel’s Messiah. Oliver watched the nonogenarian conduct for two hours with unflagging energy, and said, “What a wonderful old man!” 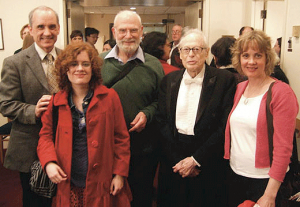 Oliver described himself in that New York Times announcement of his cancer as “a man of vehement disposition, with violent enthusiasms, and extreme immoderation in all my passions.” Oliver, of course, was passionate about classical music, as attested to in his book Musicophilia but looked physically pained during the Orff selection (he was passionately not an Orff fan).

Most of the several letters I received from Oliver Sacks were hand-written. When I sent him the manuscript of my book Godless, he wrote back almost immediately, generously offering to write a blurb and to help in any way he could.

Oliver Sacks cared about the human condition in all its forms, including (especially) when the brain does not function as it normally should. We learn from such observations how the human body and brain are constructed, and marvel that anything manages to work at all! What I most recall about Oliver was his childlike curiosity and joy, characteristics that too often disappear when we “mature.” He was brilliant and humble, a genius who made everyone else feel like an equal, like we were just schoolyard friends examining a fern (a favorite passion of his) or moving to music. “Would you like to see my journal notes?” he asked me during that first meal. When he pushed a couple of his journals over to me, he pointed out the multi-colored markings, scribbled notes and dates of his thoughts, ideas for his current book (Musicophilia), and for future books. Those journals were like a part of nature itself, unpredictable, idiosyncratic, artistic, radiant. He pulled out his beloved periodic table, a copy of which he always carried around with him. Later that day, he handed Annie Laurie one of those colored pens, a lime version from his color-coded collection, commenting that they matched her outfit.

Two weeks before his death, Oliver wrote another piece for The Times on Aug. 14, in which he movingly recalled his Orthodox Jewish upbringing, his rejection of that faith as a teenager, his mother’s cruel rejection of him for being gay, and poignantly commented:

“And now, weak, short of breath, my once-firm muscles melted away by cancer, I find my thoughts, increasingly, not on the supernatural or spiritual, but on what is meant by living a good and worthwhile life — achieving a sense of peace within oneself. I find my thoughts drifting to the Sabbath, the day of rest, the seventh day of the week, and perhaps the seventh day of one’s life as well, when one can feel that one’s work is done, and one may, in good conscience, rest.”

Oliver’s final full day of life was a sabbath. Today’s New York Times front-page obituary described Oliver Sacks as a “humanist.” He was indeed that, putting human values above religion. He was a freethinker in all senses of that word. He was a friend, to the whole world.