Motivated by the headlines, I conducted an informal poll at my workplace. I approached the 11 other women staffers who happened to be in our offices on Monday at the Freedom From Religion Foundation to ask about whether they’d ever experienced the kinds of gropes several women have testified they endured from Donald Trump.

Ten out of the 12 (including myself) have been groped or had similar unwanted experiences.* The two others had experienced sexual street harassment. One, a runner, said the intimidating catcalls and jeers are constant. I suspect this unscientific survey would be borne out as par for the course nationwide.

One woman recalled a prior workplace where she was “slapped on my butt by my male boss as I was standing at the printer.” Her boss laughed at her startled, embarrassed reaction. Another, while working PR on a previous job, had a member of the public reach down her shirt and grope her breast in public (she punched the guy in the face). She had the horrifying experience of a male hairdresser rubbing his genitals against her as he finished cutting her hair.

Another shocking encounter by a staffer occurred in a coffee shop while she was reading a book. “Some dude bit my neck, like a vampire.” She had to get tested for various transmissible diseases because the assault broke her skin.

A young woman in our office told me that she’s groped “once every couple months, usually by guys trying to hide the fact that they’re doing it.”

Yet another woman was lunged at in an elevator during a professional (not a freethought) event by a colleague who tried, Trump-like, to kiss her, leaving her profoundly embarrassed as she fought him off. When she was a student worker, she was grabbed repeatedly by a fellow employee as she went up and down the stairs.

When another staffer was asked if she’d been groped, etc., she initially said “No.” After a moment’s thought, she launched into a description of numerous experiences being groped throughout Europe while backpacking with female companions.

Those are just some of the experiences I extracted in less than 10 minutes.

Many women are reporting that the Trumpian revelations are acting like a trigger, bringing back unpleasant memories there’s no place to file. A whole social media campaign began last week when writer Kelly Oxford tweeted:

Over the course of a single evening, Kelly reported, more than 1 million women responded with their “firsts.”

Since I was asking employees in person, and didn’t want to invade privacy, I couched my question as totally optional and didn’t ask about outright rape. But it’s a very fine line. Much of what I was told, experienced myself and was described by Trump’s accusers, rates as criminal assault. In the state of Wisconsin, “groping” or other unwanted touching of breasts, buttocks or genitals qualifies as fourth degree sexual assault. If such “gropes” involve children, it becomes first degree.

The day after the Oct. 9 debate denial that brought all this to a fore, I flashed back to my “first” public grope. I was an 18-year-old walking home midday on a superbusy street. As a nondescript teenager several years my junior zoomed past fast on his low-rider bike on the sidewalk, he stuck out his hand and slugged my breast as he made a lewd comment. It really hurt and knocked the wind out of me, but I had the satisfaction of catching my breath quickly enough to yell after him, “Pervert!” After the debate, I even flashed back to my mother’s description of walking down a leafy street in Madison, Wis., early evening in the 1950s and being sexually accosted from behind. She was seven months pregnant. Her blood-curdling scream scared off her attacker.

A “grope” a few years ago involved an ordinary man I knew very slightly in a professional capacity who surreptitiously grabbed my behind from the back, in public. My classic reaction: Surely his hand dropped accidentally? Surely that squeeze was just as accidental? Surely no one you knew by name could have the chutzpah to grope you in public?

That sense of disbelief was the case for many of Trump’s accusers groped so outrageously in public. It did not compute. It couldn’t be publicly discussed. Who would even care? . . . Who indeed, until Trump denied ever groping or touching women, despite bragging: “When you’re a star, they let you do it. Grab them by the p—y. You can do anything.”

Speaking of those who don’t care, Trump’s biggest defenders not surprisingly come from those bastions of morality and “family values”: the Christian Right evangelicals.

Florida Congressman Floyd Yoho, a Trump supporter, recently told CNN’s Wolf Blitzer: “Being a Christian like I am, ‘He who has not sinned cast the first stone.’ I would love to see our candidates come above this.”

I’ve always disdained the idea that the “cast the first stone” advice is somehow admirable or wise. When people quote, “Let he who is without sin cast the first stone,” aren’t they suggesting they’re just as guilty? “Judge not lest ye be judged” is the perfect enabler for sexual predators and those who excuse their conduct. 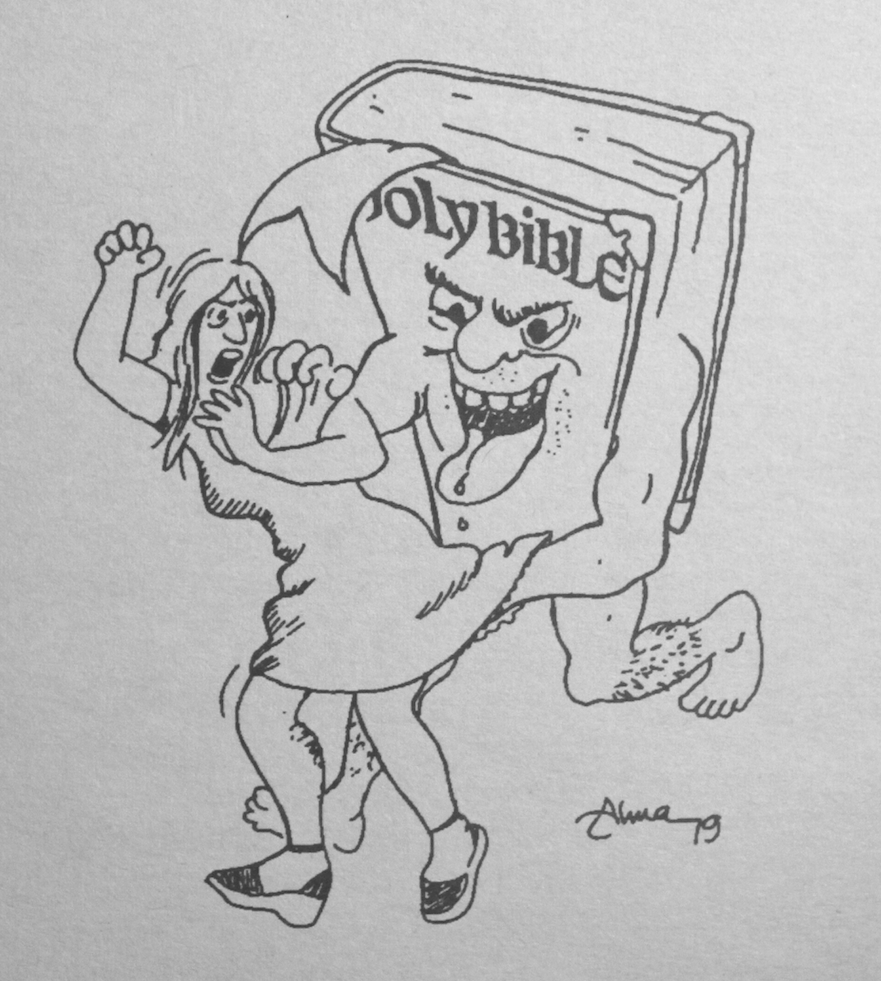 Given the biblical double standard, one has to assume most patriarchs would consider themselves sin-free. They could own multiple wives (I Kings 11:1-4), use slave women sexually (Exodus 21:7-11), rape and plunder war booty with impunity (Deuteronomy 21:11-14). Not to mention that their god ordained that men are superior to women (I Timothy 2:11-14), that fathers can sacrifice daughters (Judges 11:30-40), women are unclean (Leviticus 15:19-33), are property (Exodus 20:17) and brought sin and death into the world (Genesis 3:16). The biblical deity repeatedly denounces women as filthy whores (Ezekiel 16:36-45, among ad nauseam references) and sexually vilifies them (see Proverbs throughout). Most shocking, the biblical deity sexually gropes and abuses women himself (Isaiah 3:16) or threatens to (“I myself will lift up your skirts over your face,” Jeremiah 13:26).

It’s been suggested the silver lining to this sordid controversy could be the opportunity to spur a much-needed national discussion over the ubiquity of sexist attitudes and the continuum of sexual assault against women in our society. It’s high time to cast some symbolic stones, not just at gropers or worse, but at those religious hypocrites who seek to justify or minimize sexual violence against women.

Annie Laurie Gaylor is author of “Woe to the Women: The Bible Tells Me So” about bible sexism and is editor of “Women Without Superstition: No Gods – No Masters,” the first anthology of women freethinkers of the 19th and 20th centuries.

*Needless to say, none of these gropings occurred at the FFRF office or FFRF events. We would not tolerate such goings on.

Annie Laurie Gaylor is co-president of the Freedom From Religion Foundation. She co-founded FFRF in 1976 as a college student with her mother Anne Nicol Gaylor. She served as the editor of FFRF’s newspaper, Freethought Today, from 1985-2009. She became FFRF co-president with Dan Barker in 2004. Annie Laurie has authored three books for FFRF: Woe to Women: The Bible Tells Me So; Woe to Women: The Bible Tells Me So; and Women Without Superstition: “No Gods – No Masters”, the first anthology of women freethinkers.
All Articles by this author
PrevPreviousA convention, a media campaign— and more
NextThe T-shirt that rattled the Westboro Baptist ChurchNext