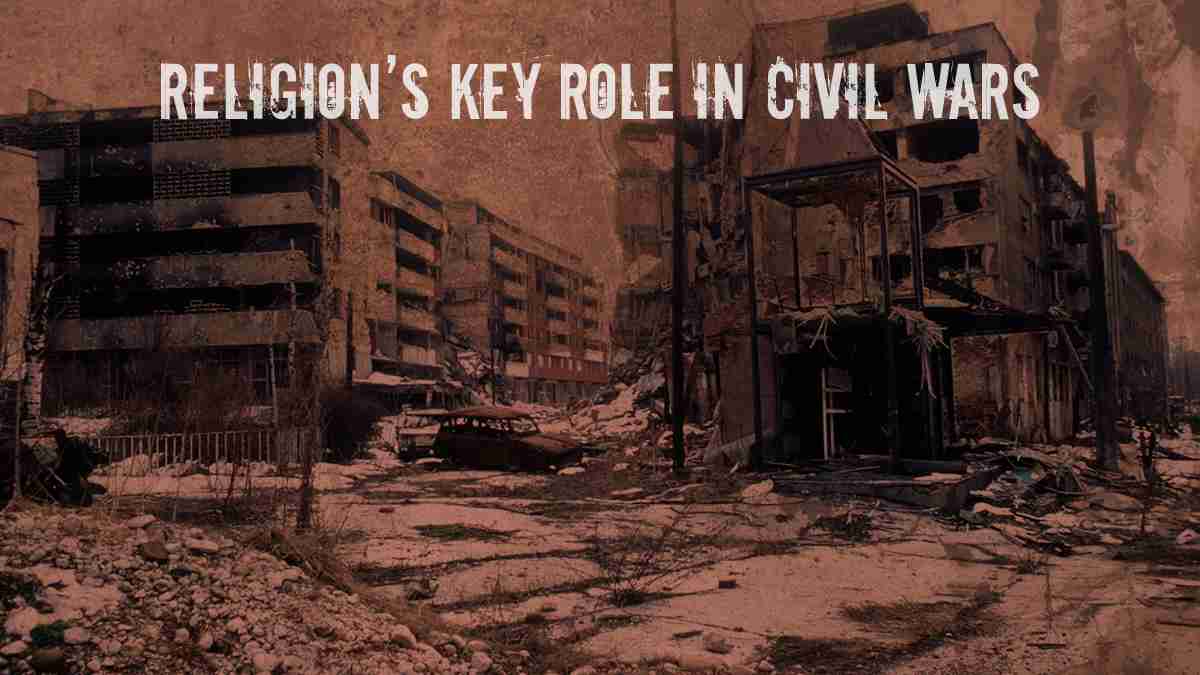 Faith conflicts have factored in many deadly civil wars. As we observe the 30th anniversary of the siege of Sarajevo, a horrendous outcome of just one such instance, here are a few examples.

YUGOSLAVIA
Let’s start with the war of which the besiegement of Bosnia’s capital became the chief symbol.

When armed control is removed from a nation, religious hostilities can erupt into violence. That’s what happened to Yugoslavia after communist strongman Josip Broz Tito died in 1980. His nation pulled apart along religious lines. In 1991, Slovenia and Croatia, both Catholic, declared independence. Fighting erupted, but subsided after a while. Then in 1992, Bosnia-Herzegovina (where Muslims are the largest religious group) voted for independence, and a horrible war flared with Orthodox Serbia. Serbian President Slobodan Milosevic called for “ethnic cleansing” to purge Muslims from the region. Slaughter became hideous.

Ironically, most of Yugoslavia had been secular, not highly religious, but the nation quickly aligned into faith groups. Former U.S. House Speaker Jim Wright wrote in the Fort Worth Star-Telegram: “This war is not about land or race or political philosophy. It is about religion. … The Slavs are the same race. They look alike, live alike, talk the same language, bleed the same color. Only their religion divides them.”

ENGLAND
England’s horrible civil war in the mid-1600s involved early steps toward democracy, with landed gentry in an incipient Parliament seeking some powers against the “divine right” of King Charles I. But the war also was riddled with religion.

It began when Charles tried to impose a new Anglican prayer book on Presbyterian Scotland. Scots rebelled in the Bishops’ War and defeated an army sent by Charles. The king was forced to call a Parliament, which had power to raise taxes, so he could get funds to fight the Scots.

However, the Parliament was full of Puritan and Presbyterian sympathizers unhappy with Charles. The “short Parliament” didn’t satisfy him, so he summoned a “long Parliament” to get war money. It was a disaster. Puritans in Parliament resisted so fiercely that civil war erupted between royalists loyal to the king and the Puritan wing in Parliament.

Oliver Cromwell became commander of Puritan forces, called “Ironsides,” who carried bibles and sang hymns as they lunged ferociously against rival armies. Cromwell defeated Charles, who was beheaded, then slaughtered thousands of Catholics in Ireland, and subsequently became a Puritan Lord Protector (holy dictator) of England. Puritans imposed rigid strictures such as the death penalty for adultery. But their era ended when the Restoration returned monarchy in 1660, with Parliament gaining more powers.

Puritans also brought their intolerance to New England, where they hanged Quakers and “witches,” decreed death for blasphemy, and flogged merrymakers. (Old joke: An Australian tells an American, “We were the lucky ones — we got the criminals, and you got the Puritans.”)

INDIA
After World War II, Britain created Pakistan for Muslims, with India proper remaining a Hindu-majority country. The separation in 1947, however, didn’t prevent colossal massacres that killed hundreds of thousands. Mahatma Gandhi himself was assassinated by a Hindu fanatic who thought the “Great Soul” was soft on Muslims.

SUDAN
In the Nile Valley south of Egypt, recurring conflict between ruling Muslims in the north and rebellious Christians and animists in the south killed at least 1 million. Britain agreed to free the colonial territory in 1956, but rebellion flared a year before, ensuing for 17 years and killing a half-million. A truce was reached in 1972, but the Muslim president tried to impose brutal Shariah law on the south, and warfare resumed. The war finally subsided in 2011 when South Sudan gained independence.

ARMENIA
In the rugged Caucasus between the Caspian Sea and Turkey, Armenia became the first Christian nation when its king converted in year 301, a decade before Constantine made it the official church of the Roman Empire. Muslim Turks seized the region in the 1500s and treated Christians as inferiors. Armenians sought help from Orthodox Russia, which triggered the Crimean War in the 1850s. During World War I, Turkey sided with Germany and Armenians rebelled — causing a historic genocide of Armenians.

Shortly after World War I, Armenia was swallowed into the Soviet Union, but finally gained independence in 1990. Ever since, Christian Armenia has battled with neighboring Muslim Azerbaijan, mainly over an enclave of Christians living inside the Muslim nation (most recently in 2020).

LEBANON
This lovely Mediterranean nation fell into tragedy in the 1970s after its various religious groups formed their own militias and plunged into civil war. Journalist Mark Patinkin wrote: “Lebanon split by faith. Religions began to form militias. And imagine what hatreds would grow in America if the Protestants formed an army, and then the Catholics, then the Jews, each arming themselves not merely with handguns but with artillery.” Years of seesawing combat killed at least 130,000 people and wrecked the beautiful land.

CENTRAL AFRICAN REPUBLIC
Pure religious war has been ravaging the landlocked Central African Republic. In 2012, minority Muslims formed a powerful Seleka militia and seized the government. In retaliation, majority Christians created a counterarmy and massacred Muslims. Of the nation’s 436 mosques, 417 were destroyed. Ensuing holy war has killed thousands and displaced a million refugees, despite the intervention of U.N. peacekeepers.

As can be seen from these instances, religion has caused or greatly exacerbated civil conflicts through much of history.

This column has been adapted and updated from a piece originally written on April 8, 2019, for Daylight Atheism.

James A. Haught, syndicated by PeaceVoice, was the longtime editor at the Charleston Gazette and has been the editor emeritus since 2015. He has won two dozen national newswriting awards and is author of 12 books and 150 magazine essays. He also is a senior editor of Free Inquiry magazine and was writer-in-residence for the United Coalition of Reason.
All Articles by this author
PrevPreviousOne step closer to nine: Celebrating the Supreme Court confirmation of Ketanji Brown Jackson
NextLoudspeaker prayers, Coach Staley, a praying judge and a jailed Nigerian freethinkerNext