PrevPreviousSecular Day of the Dead, Steve Pinker, our Ala. lawsuit — and, of course, Amy Barrett
NextAbortion rights are deterioriating in Poland and the United StatesNext

Religions are fantasies made of words 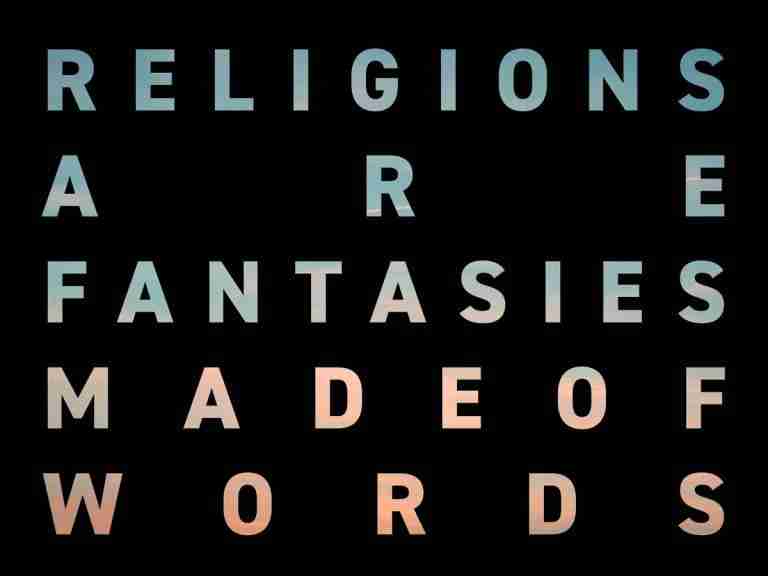 One of my friends is a devout churchgoer who tries to reform my heathen ways. He sent me an email saying:

God is love — period. He offers us eternal life through his son Jesus Christ who represented God and his love for mankind while he was on Earth. Jesus was crucified, died, buried and rose from death to eternal life by the eternal power of God. Jesus represents all of mankind to God, Jesus’ father and our father. We are one in Christ and Christ is one with the father. Because of this new relationship or new covenant with God, we will experience eternal life with Jesus and God our heavenly father. We will live with eternal bodies in a heavenly realm outside of time. … We know it happens at the point of our deaths, giving all of mankind eternal hope that our physical lives will not be lived in vain, without meaning and purpose.

Those rapturous words bear strong meaning for my friend, giving him a focus for his life. But I ask myself: Does he never consider that it may be just a fantasy concocted out of words, with no actual reality?

Churches and theologians build make-believe imagery, with no tangible evidence to support it. It’s merely a house of cards consisting of rhapsodic words, but no substance. They make a word picture of “eternal bodies in a heavenly realm outside of time,” but the realm itself isn’t real.

Actually, the “God is love” label doesn’t fit the Old Testament monster who killed multitudes of Egyptian children at Passover and drowned nearly everyone in Noah’s flood. And it doesn’t fit the divine creator who designed everything, including cancer, cerebral palsy and spina bifida. Nor the creator who designed tsunamis, hurricanes and earthquakes — and crafted hawks to kill rabbits or cobras to kill children. What sort of loving creator is this?

Stop and think: Thousands of different religions have existed — from Aztecs sacrificing people to an invisible feathered serpent to Hindus praying over models of Shiva’s penis, from Jehovah’s Witnesses awaiting the Battle of Armageddon to Mormons who think an angel showed golden plates to a convicted swindler — and each faith can be considered a mere fantasy made from words. It’s easy to invent word fantasies.

Supernatural religion is thankfully vanishing among educated Western people. Someday, maybe, those who believe in eternal bodies in a heavenly realm outside of time will be only an odd fringe.

This column is adapted from a piece originally published at OpEd News and Daylight Atheism.

All Articles by this author
PrevPreviousSecular Day of the Dead, Steve Pinker, our Ala. lawsuit — and, of course, Amy Barrett
NextAbortion rights are deterioriating in Poland and the United StatesNext