Question for evangelicals: Have you no sense of decency? 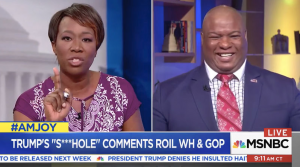 As if we needed further proof that evangelicals have ceded all moral ground in their devotion to President Trump, along comes their evasiveness and worse regarding his racist comment about (pardon my French) “shithole countries” and their inhabitants.

Trump won 80 percent of the white evangelical vote. This was despite his lifestyle that includes lewd language, disrespectful remarks about women, claims by multiple women of sexual harassment or assault, several marriages and divorces, casino ownerships, and traits evangelicals would otherwise call impious and the rest of us would call disturbing. As FFRF Co-President Dan Barker puts it: “Evangelicals used to say, ‘Character counts.’ Now they discount character.”

If evangelicals could happily countenance the libel that Mexicans “are rapists” and Mexican-American judges illegitimate, it really shouldn’t be shocking or surprising that they would shrug over Trump’s latest racial defamation. As the Washington Post reported, several members of Trump’s evangelical advisory council quickly went on record in defense of the president, including its spokesperson Johnnie Moore, who conceded that the comments as described were “crass,” but that the media reports are “absolutely suspect and politicized.”

Southern Baptist Robert Jeffress, pastor of First Baptist Dallas, stalwartly supported Trump (even if he said he would have chosen another word): “What a lot of people miss is, America is not a church where everyone should be welcomed regardless of race and background. I’m glad Trump understands the difference between a church and country. I support his views 100 percent, even though as a pastor I can’t use that language.”

Setting aside the irony that many evangelicals do not understand the actual difference between church and country, Jeffress’ unapologetic rationalization was disturbing. He insisted, “I don’t think there’s anything racist about it at all.” What really makes evangelical reaction far worse is the muted expression of concern over the language, but no concern over Trump’s meaning.

Perhaps most shocking was the response by an African-American member of Trump’s Evangelical Advisory Council. Mark Burns, a South Carolina pastor, tussled with MSNBC’s Joy Reid, denying the comment, but also providing supposed biblical justification with I Timothy 5:8 (which also manages to impugn atheists): “Anyone who does not provide for their relatives, and especially for their own household, has denied the faith and is worse than an unbeliever.” Elsewhere, Burns claimed that Trump was reacting to poor conditions in Haiti and Africa that were the fault of “lazy governments” there.

True, some more mainstream or progressive pastors denounced Trump, but that’s nothing more than a normal reaction in the midst of the international condemnation, particularly days before the Martin Luther King Jr. holiday. However, among evangelicals, Trump’s vicious remarks have been largely met with complicit silence. Ho-hum.

It’s high time to ask evangelicals the question an attorney famously once asked Sen. Joe McCarthy: Have you no sense of decency?

Annie Laurie Gaylor is co-president of the Freedom From Religion Foundation. She co-founded FFRF in 1976 as a college student with her mother Anne Nicol Gaylor. She served as the editor of FFRF’s newspaper, Freethought Today, from 1985-2009. She became FFRF co-president with Dan Barker in 2004. Annie Laurie has authored three books for FFRF: Woe to Women: The Bible Tells Me So; Woe to Women: The Bible Tells Me So; and Women Without Superstition: “No Gods – No Masters”, the first anthology of women freethinkers.
All Articles by this author
PrevPreviousOn Religious Freedom Day, pondering the gay wedding cake controversy
NextA letter to President Trump about his Religious Freedom Day proclamationNext