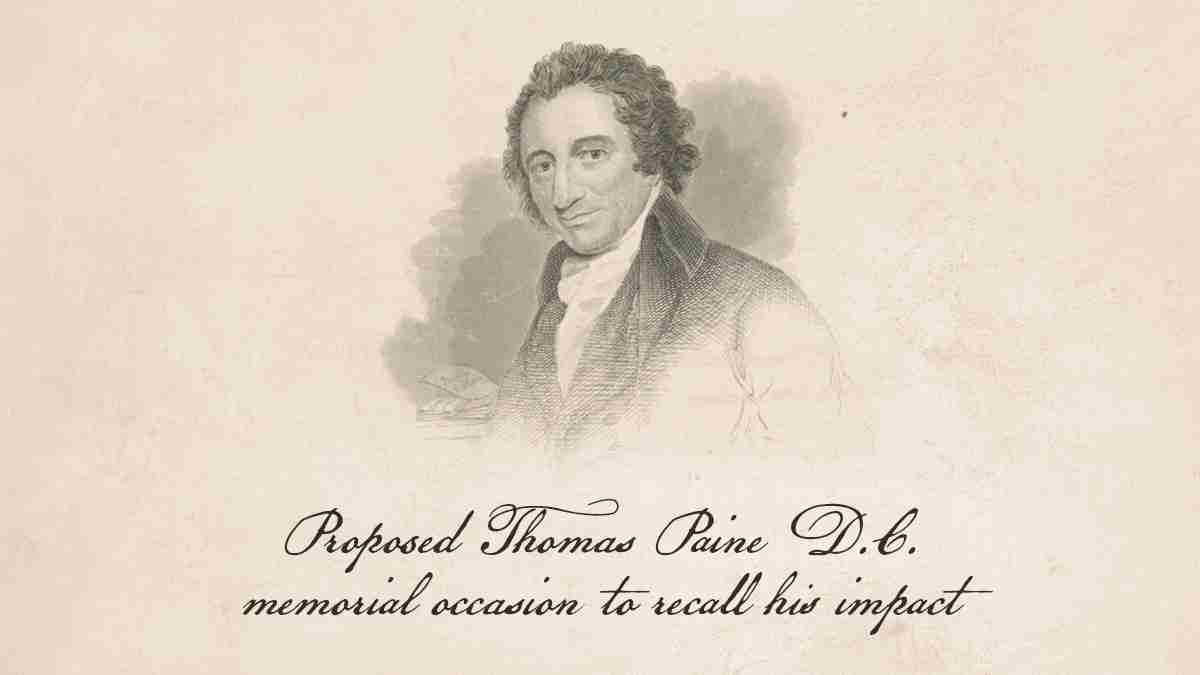 Now that Congress is considering a bill — introduced by Rep. Jamie Raskin — to memorialize Thomas Paine, it’s a good opportunity to reflect on the legacy of our “Forgotten Founder.”

In the early 1900s, President Theodore Roosevelt wrote that Paine —- the fiery voice of the American Revolution — was a “filthy little atheist.” Many others throughout American history have shared this evaluation.

Actually, Paine was a Deist, who felt he could sense God in the immensity of nature, and who once wrote, “I hope for happiness beyond this life.” However, he deemed Christianity and all other organized religions to be frauds sustained by priests and kings. This view, plus his crusading for people in need, kept Paine in trouble much of his life.

Paine was born in England, the son of a Quaker corset-maker. As a young man, he failed to find a suitable role for himself: He went through two brief marriages and several unsatisfactory jobs. Then, in London, Paine met Benjamin Franklin, who urged him to seek a career in America and gave him letters of introduction.

In 1774, Paine arrived in Philadelphia, where he became a writer for the Pennsylvania Magazine. Revolutionary fever was growing, and he joined the cry for independence and democracy. His 50-page booklet, Common Sense, sold 500,000 copies in early 1776 and helped set the stage for the Declaration of Independence. The following winter, as the colonial forces suffered, Paine wrote the first of 16 Crisis pamphlets, opening with the renowned words: “These are the times that try men’s souls.” Washington ordered it read to his freezing soldiers at Valley Forge.

Throughout the War of Independence, Paine refused to take money from his pamphleteering, and led relief drives to aid the Colonial troops. After the victory, he was given a New York farm.

He returned to England in 1787, but was once more drawn into politics and wrote an attack on Prime Minister William Pitt. When Edmund Burke denounced the French Revolution, Paine replied with his famous The Rights of Man and a sequel, assailing monarchy and championing democracy. He proposed public education, opportunity for the poor, pensions for the aged, public works for the jobless, and other such reforms. England’s rulers called it an incitement to “bloody revolution.” The writer was charged with treason and his writings were seized.

Paine narrowly escaped to France, where the revolutionaries already had elected him to the National Convention. But he plunged into trouble again by opposing the guillotining of aristocrats. He was imprisoned, and a mark designating execution was chalked on the door of his cell, but mistakenly on the wrong side, so that it could not be seen when the door was closed.

While Paine was in prison, his The Age of Reason, an assault upon Christianity and the bible, was published, sending a shock through much of the world. He was denounced in America and England as a blasphemer and disbeliever.

In 1794, when the Reign of Terror in France ended, Paine was released, but in broken health. In 1801, he grew homesick for America. His friend President Thomas Jefferson offered to send a warship to fetch him. But Paine knew that Jefferson, too, was being denounced as an infidel, and declined the offer, to avoid adding further stigma to Jefferson.

Paine returned quietly to America in 1802, where found himself widely hated. He died in New York City in 1809.

Paine’s views on religion were trenchant. “All national institutions of churches, whether Jewish, Christian or Turkish, appear to me no other than human inventions, set up to terrify and enslave mankind, and monopolize power and profit,” he wrote in The Age of Reason. And he had in the same work a line for us to live by: “The world is my country, all mankind are my brethren, and to do good is my religion.”

The U.S. Congress would be paying Thomas Paine a befitting —  if belated — tribute in setting into motion a permanent memorial to him in the nation’s capital.

This column has been adapted and updated from an essay in Haught’s 2000 Years of Disbelief: Famous People with the Courage to Doubt (Prometheus Books, 1996).

James A. Haught, syndicated by PeaceVoice, was the longtime editor at the Charleston Gazette and has been the editor emeritus since 2015. He has won two dozen national newswriting awards and is author of 12 books and 150 magazine essays. He also is a senior editor of Free Inquiry magazine and was writer-in-residence for the United Coalition of Reason.
All Articles by this author
PrevPreviousHonoring Black History Month with reproductive justice
NextA high-profile W.Va. lawsuit, a Tennessee objection, Thomas Paine and “IM GOD”Next