Skip to content
PrevPreviousTime to celebrate!
NextHobby Lobby’s “In God We Trust” ad is still untrustworthyNext

The Republican platform proposals up for a full vote at the convention reveal the continuing aspiration by many to make “GOP” stand for “God’s Own Party.”

The platform committee approved language that defines marriage as “the union between one man and one woman,” opposes adoption by same-sex couples, and supports protection of business that deny services to same-sex couples. The platform proposal calls for overturning via constitutional amendment the U.S. Supreme Court’s ruling establishing marriage equality, and for appointing judges who “respect traditional family values.” The platform promotes state laws to limit which restrooms transgender people can use.

Those planks were adopted even before Donald Trump chose as his running mate Gov. Mike Pence, whose legislation in Indiana to allow discrimination against gays in the name of religion provoked a national backlash, and who is known for his fundamentalist homophobia.

One of the proposed plank’s radical elements is to approve the rights of parents to use “conversion therapy” and enlist a therapist to try and change a child’s sexual orientation — a practice banned in a number of states, as The Washington Post points out.

The anti-gay provisions prompted committee member Annie Dickerson to ask, “Has a dead horse been beaten enough yet?”

Of most concern to the work of FFRF is the proposed plank to promote the use of the bible in our public school curriculum as elective courses. The platform says teaching the bible in public schools is “indispensable for the development of an educated citizenry.” (It’s strangely silent on the need to teach the Koran, or, say, Richard Dawkins’ “The God Delusion.”)

Theoretically, were we in Candide’s “best of all possible worlds,” such courses would not be controversial. I took an informative elective six-week course in my progressive public high school on “The Bible as Literature,” in which we primarily read novels that elaborated on some biblical literary (not religious) themes.

But with half of the thousands of state/church complaints FFRF took last year stemming from religious incursions in our public schools, we know it’s a fact that many teachers, coaches and even principals view a captive audience of public school students as their own private recruiting territory. At FFRF, we are constantly chasing the Gideon Society and its bible-toting male evangelists out of public schools, and monitoring the imposition of prayer and religious ritual upon students. Those violations can be as blatant as a cross on classroom walls, a painting of praying children in a principal’s office or baptism dunkings on school football fields during practice (violations all halted by FFRF). 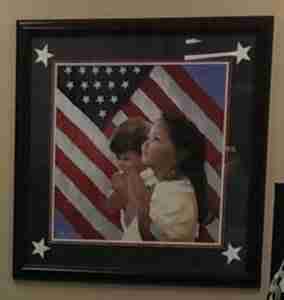 A well-known study of Pennsylvania science teachers found 13 percent advocated creationism in the classroom, and a majority failed to take a solid stance on evolution, in order to avoid conflict. Fewer than 30 percent took a clear pro-evolutionary stance. So even if teachers aren’t fundamentalists or creationists, they often cater to those special interest groups out of fear of reprisal.

In a nation where three in four still see the bible as “the Word of God,” either literally (28 percent) or as divinely inspired (about half), how can we expect most classroom discussion to stay dispassionate?

Well, we can’t. And that’s why the bible proposal is in the draft plank. According to The New York Times, the hand of Family Research Council President Tony Perkins “could be seen in dozens of amendments on issues like gun control, religious expression and bathroom use.” Another engineer of the platform, also according to The Times, was Kansas Secretary of State Kris Kobach, who’s “been busy shaping extremist positions in the party platform to suppress immigration, gun controls and same-sex marriage.”

In short, theopolitics is alive and well in what used to want to be known as the Grand Old Party.

Annie Laurie Gaylor is co-president of the Freedom From Religion Foundation. She co-founded FFRF in 1976 as a college student with her mother Anne Nicol Gaylor. She served as the editor of FFRF’s newspaper, Freethought Today, from 1985-2009. She became FFRF co-president with Dan Barker in 2004. Annie Laurie has authored three books for FFRF: Woe to Women: The Bible Tells Me So; Woe to Women: The Bible Tells Me So; and Women Without Superstition: “No Gods – No Masters”, the first anthology of women freethinkers.
All Articles by this author
PrevPreviousTime to celebrate!
NextHobby Lobby’s “In God We Trust” ad is still untrustworthyNext