The nation’s top evangelical wants to make sure his golden goose keeps on delivering him eggs forever. 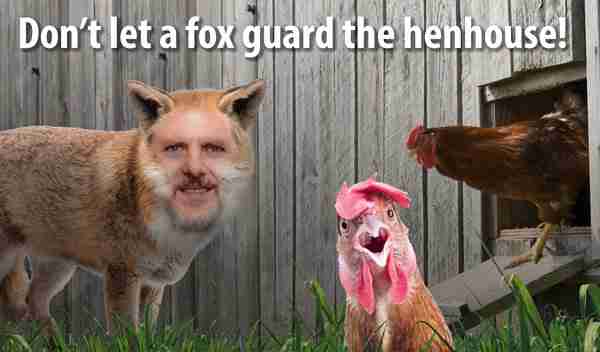 Liberty University’s Jerry Falwell Jr. recently told the Chronicle of Higher Education that President Trump has asked him to lead a new task force charged with dealing with “overreaching regulation” of higher education. Although the appointment is not official yet, Falwell is just the man to carry out the task — and to benefit from it.

Liberty University, founded by Falwell Sr., has the largest enrollment of online students next to the University of Phoenix. As The New York Times reports in its excellent exposé, the university, now run by Jerry Jr., enrolls about 14,000 evangelical Christian students on its campus in Lynchburg, Va. But far outnumbering traditional students are its 65,000 online students.

“Liberty is essentially a medium-size nonprofit college that owns a huge for-profit college,” writes Times reporter Kevin Carey. And as he points out, unlike University of Phoenix, “Liberty doesn’t pay taxes” due to its nonprofit status.

Online enrollment brought in $591 million to the university in 2013. Most of the tuition for these online students is paid via financial aid provided by the federal Department of Education. In 2015, the fundamentalist university took in $347 million from federal undergraduate grant and loan programs. (By contrast, Arizona State, the nation’s largest university, received $169 million that year, and the University of Virginia $37 million.)

Not surprisingly, Falwell is not a fan of regulating higher education. He’s announced he would roll back reforms that the Obama administration adopted to rein in predatory for-profit colleges — reforms that spook him even if they don’t directly affect the functioning of his university.

Falwell opposes the stronger standards for accrediting organizations that grant colleges access to federal financial aid. He also opposes regulations to help students who’ve been cheated by fraudulent colleges and left holding worthless diplomas to have their student loans forgiven.

His dislike of such regulations is probably due to the fact that many former Liberty students or graduates themselves are, according to The Times, “struggling to repay their federal loans.” About 9 percent default within three years of graduation, compared to the average 6.5 percent for private four-year colleges. More than 40 percent of former Liberty students earn less than $25,000 per year at about age 25 — earnings that would be expected of high school, not college, grads.

Liberty University’s $1 billion cash reserve “was underwritten largely by the federal taxpayer,” as The Times points out. Falwell can thank federal taxpayers for his obscenely large salary of $900,000 a year as president of this “nonprofit” university.

Falwell must be rubbing his hands in glee at the prospect of heading up a higher education deregulation task force. That way, he’ll be able to make certain that his golden goose remains alive and well.

Annie Laurie Gaylor is co-president of the Freedom From Religion Foundation. She co-founded FFRF in 1976 as a college student with her mother Anne Nicol Gaylor. She served as the editor of FFRF’s newspaper, Freethought Today, from 1985-2009. She became FFRF co-president with Dan Barker in 2004. Annie Laurie has authored three books for FFRF: Woe to Women: The Bible Tells Me So; Woe to Women: The Bible Tells Me So; and Women Without Superstition: “No Gods – No Masters”, the first anthology of women freethinkers.
All Articles by this author
PrevPreviousNo letup for us here at FFRF
NextAnother busy period for usNext