Skip to content
PrevPreviousWe have to explain so much!
NextAmerican politicians use the bible to justify atrocities … againNext

For much of the annual SBC meeting this week, held as a scandal swirls — something we wrote about a few weeks ago — it seemed hopeful that progressive secular values might be infiltrating the enclave. But things ended on a sour political note as Vice President Mike Pence took to the stage Wednesday. He preached a toxic brand of Christian nationalism — conservative politics, historical revisionism, absolutism, and Christianity — that he and Donald Trump rode into the Oval Office. This was exemplified when Pence once again proclaimed that he is “a Christian, a conservative, and a Republican . . . in that order.” 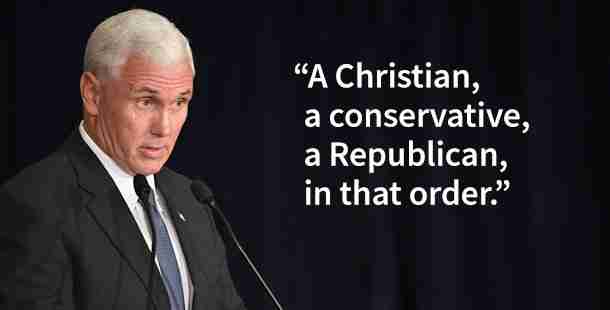 Pence wasn’t the only Christian nationalist at the meeting. Long-time hater and FFRF-obstructor, Abbott, also preached this poisonous strain of religio-politics to the ministerial gathering.

Pence shows why state-church separation is a constitutional imperative.

Overall, Pence’s speech sounded, as one CNN op-ed commented, like a “shameless suck up to the boss.” These believers were there to talk about their god and, as the op-ed pointed out, Pence seemed to want to sing the praises of another savior: Trump. The newly minted SBC president, J.D. Greear, even took to Twitter to condemn Pence’s “mixed signal.”

I know that sent a terribly mixed signal. We are grateful for civic leaders who want to speak to our … https://t.co/BT1SgUXWgj

But the SBC had a politician, granted Pence is terribly religious, address its meeting. What did it expect? (Actually, the veep invited himself, which makes the state-church angle even more pronounced.)

An attendee accused the VP of “hijacking our unified religious meeting.” That encapsulates, perhaps unintentionally, one of the very reasons the founders chose to keep state and church separate.

We in the secular movement sometimes forget this flip side of state-church separation, but we shouldn’t. It’s a powerful argument in our favor. One of the reasons our founders chose to separate religion from government and government from religion is that religion is inherently divisive. It’s often portrayed as a unifying force, but that’s only true for the believers within the sect, as the attendee above observed. But everyone else is an outsider. The founders thought that adding something so inherently and historically divisive to our government would produce a dangerous mix, as the Southern Baptists listening to Pence discovered.

Madison was more explicit and colorful when he wrote his Memorial and Remonstrance against religious assessments to oppose a three-penny tax that would fund Christian preachers. Madison observed that when secular and religious governments are united, religion often suffers along with the people. For Madison, experience showed that ecclesiastical establishments:

instead of maintaining the purity and efficacy of Religion, have had a contrary operation. During almost fifteen centuries has the legal establishment of Christianity been on trial. What have been its fruits? More or less in all places, pride and indolence in the Clergy, ignorance and servility in the laity, in both, superstition, bigotry and persecution.

So yes, when you let politicians to speak at your religious meeting, you should expect them to hijack and divide. This is, historically, one reason we have a separation of state and church.

By and large, Baptists are turning their backs on this history. And it is their history, too. When they were less powerful a minority and before the sect split over the abolition of slavery in the mid-nineteenth century, they supported state-church separation, as some still do. Thomas Jefferson’s famous letter, the letter that gave us the “wall of separation between church and state,” was written to the Danbury Baptists, who were worried about church and state not being sufficiently separate at the state level.

Perhaps that is why, according to one report, “several Southern Baptists proposed removing [Pence’s speech] from the meeting’s program and replacing it with a time for prayer or sermon.” Too bad the vote failed by a 2-to-1 margin.

Pence wasn’t the only pious politician the SBC invited to speak. Texas Gov. Greg Abbott was there, too.

Abbott — and he might have been thinking about FFRF — said that some are attempting to “silence the faithful and remove God from the public square.” Personally, I think that’s pretty rich coming from a guy who, quite literally, removed the Bill of Rights, our Founding Fathers, and the Statue of Liberty from the Texas Capitol in order to silence us. We’re suing him because of that censorship and have already won at the district level. And, as Hemant Mehta pointed out over at the Friendly Atheist, a state governor talking to a crowd of 10,000 about how they are being silenced is absurd: “The only way that would be more ironic is if he said it while holding a megaphone.”

He told his story of being “saved” and said that “all we need to do in life is to submit ourselves to God Almighty . . . and the rest will take care of itself,” a line that drew applause. But really, like Pence, Abbott was there to preach Christian nationalism: “We must never forget that from the very birth of this nation we have been ‘one nation under God.’” Abbott wants to take the country back a time that never existed. “Under God” didn’t rear its divisive little head until the 1950s.

We could spill gallons of ink and expend millions of digital characters explaining all the errors, evils, and distortions in these two speeches. Indeed, I’ve written a book manuscript that debunks the many myths of Christian nationalism. But the point is that, if Pence or Abbott cared anything for the oaths they swore or understood the document they promised to preserve, protect, and defend, they would not have sought out or accepted the speaking engagements in the first place. But they don’t. They profess to care about a Constitution that does not exist. They are working toward a Constitution that creates two classes of people: Christians and everyone else. Though this is never explicit, it is one of the central goals of Christian nationalism and that is why Christian nationalism is a threat to our Constitution — one that FFRF will continue to beat back.

Andrew L. Seidel is a constitutional attorney and the Director of Strategic Response at the Freedom From Religion Foundation. His first book The Founding Myth: Why Christian Nationalism Is Un-American was burned by a Tennessee preacher. His second book, American Crusade: How the Supreme Court is Weaponizing Religious Freedom, is due out in 2022. He's won numerous academic awards and holds two law degrees: a J.D. magna cum laude from Tulane University Law School and an L.L.M. from Denver University’s Sturm College of Law. Andrew has a B.S. in neuroscience and environmental studies from Tulane. Before dedicating his life and law degree to keeping state and church separate, Andrew was a Grand Canyon tour guide and an accomplished nature photographer. Andrew has appeared on Fox News to debate Bill O’Reilly, MSNBC, and hundreds of other media outlets speaking on behalf of FFRF.
All Articles by this author
PrevPreviousWe have to explain so much!
NextAmerican politicians use the bible to justify atrocities … againNext