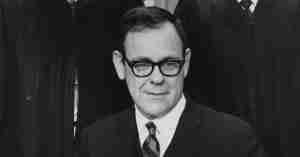 I’ve often remarked that the Freedom From Religion Foundation’s most stalwart, radical members — those who are most indignant over the union of religion and government — are in their 70s, 80s and 90s. There is actually a good reason for that. You have to be older than roughly 72 or 73 to remember or have learned the godless, original version of the Pledge of Allegiance before it was tampered with by Congress in 1954. You have to have been born at least by the 1940s to be old enough to remember handling godless U.S. currency — paper money — that bore only the original motto, “E Pluribus Unum,” and not the late-1950s usurper, “In God We Trust.”

And now the immortal legacy of Alfred T. Goodwin, 99, who died last month and who naturally learned that godless pledge, will be as author of a brilliant decision declaring the religious Pledge of Allegiance unconstitutional. Goodwin wrote the 2-1 majority opinion of the 9th U.S. Circuit Court of Appeals on June 26, 2002, in a case involving a challenge of “under God” in the pledge by atheist physician/attorney Michael Newdow, on behalf of his school-age daughter. Goodwin, then 79, held that the insertion of the phrase “one nation under God” was unconstitutional as recited in public schools. In fact, Goodwin famously wrote: “A profession that we are a nation ‘under God’ is identical to a profession that we are a nation ‘under Jesus,’ a nation ‘under Vishnu,’ a nation ‘under Zeus,’ or a nation ‘under no god.’”

More than that, Goodwin added, the addition of “under God” in the pledge forces schoolchildren to swear allegiance to “monotheism,” with the state impermissibly taking a position on the “existence and identity of God.”

Those old enough to remember the case will never forget the furor that beautifully reasoned decision created. It became the decision heard around the world. Reprehensibly, less than four hours after the historic ruling, U. S. senators voted 99-0 to pass a resolution denouncing it. House members, not to be one-upped, raced to the steps of the Capitol to recite the Pledge of Allegiance in unison, literally screaming out the words “under God.” The next day, the House adopted a resolution calling upon the 9th Circuit to reverse its ruling, with only Reps. Bob Scott, D-Va., Mike Honda and Pete Stark (both D-Calif.) dissenting. (Eleven voted “present.”) The condemnation was bipartisan.

President Bush vowed, despite the constitutional proscription against religious tests for public office, to make support of “under God” in the Pledge of Allegiance a litmus test for federal nominees. Sen. Joseph (“Holy Joe”) Lieberman, D-Conn., called for a constitutional amendment to ensure God stayed in the pledge.

Goodwin gave an interview where he noted that he had been involved in many “hot button issues,” but this one was “the noisiest thing I’ve ever experienced.” As the New York Times obituary  put it, Goodwin stayed unfazed. “I never had much confidence in the attention span of elected officials for any kind of deep thinking about important issues,” he told the Law.com website. Both Goodwin and the late Judge Stephen Reinhardt, who had joined the decision, were surprised that demonstrators began picketing their courts and homes. One group even flew a plane over Reinhardt’s home, trailing a banner reading “One Nation Under God.” Reinhardt commented: “I think it’s a bit excessive.”

Attorney General John Ashcroft demanded a rehearing of the case, although that wasn’t his right. The Sacramento school district being sued had that right, however, and demanded a rehearing — in which the entire (very large) appeals court reheard the case. Goodwin stayed the opinion while it was heard. Gloriously, almost a year later, the full court let stand the decision (with nine of the 24 judges vigorously dissenting).

When the case was appealed to the U.S. Supreme Court, Newdow wowed the nation, giving what veteran court reporter Linda Greenhouse termed a “spellbinding” argument and what NPR’s Nina Totenberg called a “virtuoso” performance. “I am an atheist,” Newdow said. “I don’t believe in God. And every school morning my child is asked to stand up, face that flag, put her hand over her heart and say that her father is wrong.” Newdow’s argument changed minds at that time, with his hometown newspaper, the Sacramento Bee, reversing its previous editorial and coming out in his support. The paper termed it “a teachable moment.”

FFRF filed a friend of the court brief in the case, with attorney Robert R. Tiernan writing on our behalf, “Nonbelievers do not take the position that the government should be hostile to religion. It is not contended that the Pledge of Allegiance should affirmatively say that this is not one nation under God or that the national motto should be ‘In God we do not trust.’ Nonbelievers simply seek balance — and balance is best struck by neutrality.”

Unfortunately for Newdow and secular law, he was in a custody battle with the mother of his then 9-year-old daughter. The mother was a devout Christian who even submitted a hostile amicus brief in the case written by Kenneth Starr, and sang hymns at the Supreme Court during Newdow’s hearing. The high court, conservative even in 2004, thus felt it had been handed a plausible pretext to avoid this hot potato challenge, and claimed in a June 2004 ruling that Newdow lacked standing because he lacked custody. Three justices — Chief Justice William H. Rehnquist, joined by Justices Sandra Day O’Connor and Clarence Thomas — went on record on the merits, saying “under God” didn’t violate the Constitution. Five justices, in an opinion written by Justice John Paul Stevens, didn’t comment on the merits. Sublimely, Justice Antonin Scalia had recused himself, at Newdow’s request, for prejudging the case.

However, Thomas made an amazing admission, writing that  “as a matter of our precedent the Pledge policy is unconstitutional.” Presaging the scary court of today, in which Thomas has gone from the reactionary outlier to having a majority join him, Thomas argued to undo more than 60 years of high court rulings on religion in schools. “Quite simply, the Establishment Clause . . . protects state establishment from federal interference. [It] does not protect an individual right,” he wrote. Thomas’ remarks shocked court onlookers at the time, who pointed out his view would permit states to impose an official religion. What were outrageous words in 2004 by Thomas should now be considered a chilling warning of what’s in store for the Establishment Clause with the Trump-captured Supreme Court.

But the operable take-away at the time was the Bee’s editorial term, “teachable moment.” Goodwin’s measured and eloquent reasoning in the whirlwind, tremendously exciting case did indeed teach the nation about the forgotten secular history of the pledge. Newdow’s “David and Goliath” challenge intrigued observers and the case instructed Americans that even though a minister had written the original secular pledge, the said pastor himself objected to the pledge being tampered with. Although invalidated by a cowardly Supreme Court, Goodwin’s ruling will live on as the best of America’s secular jurisprudence.

Annie Laurie Gaylor is co-president of the Freedom From Religion Foundation. She co-founded FFRF in 1976 as a college student with her mother Anne Nicol Gaylor. She served as the editor of FFRF’s newspaper, Freethought Today, from 1985-2009. She became FFRF co-president with Dan Barker in 2004. Annie Laurie has authored three books for FFRF: Woe to Women: The Bible Tells Me So; Woe to Women: The Bible Tells Me So; and Women Without Superstition: “No Gods – No Masters”, the first anthology of women freethinkers.
All Articles by this author
PrevPreviousCelebrating Paine, religious liberty and good abortion news
NextAbortion pills should be available to allNext