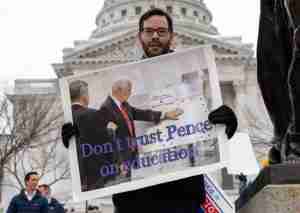 This was originally published in the Wisconsin State Journal on January 28, 2020.

Vice President Mike Pence, who plans to attend a rally today at the state Capitol to bolster “school choice,” may love the idea of spending taxpayer money on private religious schools — but families and taxpayers alike should be alarmed.

In part, the rally at the Capitol in Madison is intended to celebrate the 30-year anniversary of the Milwaukee voucher program. This is not a program worth celebrating. If anything, the mismanaged program should serve as a warning about what can happen when a state gives public money to unaccountable religious schools.

Wisconsin’s voucher programs provide tuition payments to private schools and then reduce state aid to the local school district. The state Department of Public Instruction reported this school year that it will withhold or deduct more than $145 million from local school districts where voucher students reside.

We have a long tradition in Wisconsin of public schools that welcome all students regardless of background, religion or individual characteristics. But in the voucher programs, parents self-select schools based on religious affiliation. For example, when Pence was governor of Indiana, 99 percent of the schools participating in that state’s school voucher program were religious. In a survey conducted by the Friedman Foundation, the top reason cited by parents for choosing an Indiana voucher school was religion.

We have the same problem in Wisconsin with both the Milwaukee and statewide voucher programs. Religious schools dominate the landscape. Only one of the 254 schools in the Wisconsin Parental Choice Program is not religious. Instead of pluralistic schools that exist to educate, not indoctrinate, we have segregated religious schools that are not welcoming to all students. Some private schools in Wisconsin have, for instance, enshrined anti-LGBTQ policies in their student handbooks.

On this dubious voucher anniversary, we should also reflect on the accountability problem that politicians created when they turned public money over to private actors. More than $139 million was given to Milwaukee voucher schools that were eventually removed from the program for failing to meet requirements related to finances, accreditation, student safety and auditing. One notorious voucher school in Milwaukee, LifeSkills Academy, closed up shop in 2013 during the middle of the school year, leaving parents scrambling.

Besides financial mismanagement, the Milwaukee program has witnessed pop-up schools that do not meet even basic standards. Some schools lack a safe outdoor space for children to play. Some schools reportedly lacked textbooks. A teacher at LifeSkills Academy reported that students were served ramen noodles with hot sauce and a cup of water for lunch before the school was removed from the National School Lunch Program. Are these the schools that the vice president will be celebrating?

Rather than celebrate a failed voucher program, we should work to support our public schools, which have public oversight and which serve all of Wisconsin’s children.

Patrick Elliot, the Foundation's Senior Litigation Counsel, hails from St. Paul, Minn. Patrick received a degree in legal studies and political science from the University of Wisconsin-Madison (2005). He attended the University of Wisconsin Law School and received his Juris Doctor in 2009. He joined FFRF as a staff attorney in 2010. Patrick oversees litigation for FFRF, including important First Amendment cases involving religion in schools, religious displays, and free speech violations. Patrick is admitted to practice in Wisconsin, Minnesota, the U.S. Supreme Court, and many federal district and circuit courts around the country. Patrick has served as the Chair of the Civil Rights & Liberties Section of the State Bar of Wisconsin (2020). He has helped plan and present educational programs for lawyers on civil rights issues.
All Articles by this author
PrevPreviousProtesting Mike Pence, condemning Paula White & doing the constitutional thing
NextDonald Trump, a prayer breakfast, Black History Month — and a debate with GodNext