Skip to content
PrevPreviousWelcome to the secular jungle!
NextFFRF comes out strongly weeklyNext

The numbers are all the more staggering and sobering because the Pennsylvania grand jury report, released yesterday, encompassed only six of the eight dioceses in the state. The report says that there are significantly more victims than those named because the coverup was so widespread and successful: “We believe that the real number — of children whose records were lost, or who were afraid ever to come forward — is in the thousands.” 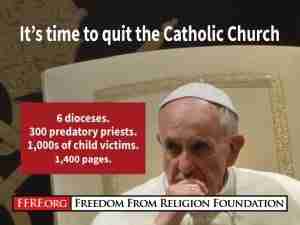 The most important takeaway from this truly disgusting scandal — the thing that every human being should be screaming from the rooftops — is that it’s time to quit the Catholic Church. This is not new. This is not a surprise. This is just a very well-documented investigation by secular authorities.

Religion is the problem.

There are many gut-wrenching, heartbreaking details in the report — for an abbreviated catalog of horrors, see The Friendly Atheist’s article — but the consistent theme underlying the analysis is authority. Unquestionable, unassailable authority. Divine authority. In my opinion, that is the biggest contributor to the depth, breadth and severity of this menace.

If the Catholic Church were a chain of private schools or a secular, multinational corporation, it could never get away with raping children on an industrial scale and covering it up. The difference is that these young victims are taught by everyone in their orbit that their tormentors are divine. They are the representatives of god on earth. They are not to be questioned and certainly not to be disobeyed. In fact, to disobey your tormentor is to disobey god. Under Catholic Canon law, adherents are required to give a “religious submission of the intellect and will” to their church.

The entire power structure of the Catholic Church is predicated on complete obedience to “men of God.” The abuse is so bad in the church because it is a church. As one victim put it, the priests “are much above anybody else in your family or they are God in the flesh.”

The evil is boundless because of the power of religion. Here’s one haunting example from the report. The victim’s mother was missing mass and he was told by “a Sunday school teacher that missing mass could make you die. Concerned for his mother who was missing mass, the victim went down to the church to plead the case of his mother” to Father Guth:

Guth asked the victim whether he believed that Jesus suffered and died for our sins, in response to which the victim said “of course” as that is what he was taught. Guth talked about penance and having crosses to bear and asked the victim if he would do anything to save his mother. Guth then spoke of secret confessions and penance before reaching over and unbuckling the victim’s pants, pulling them down, fondling him, and sticking his finger up the victim’s anus.

The priest told the victim that both he and his mother would burn in Hell if he ever told anyone about the “secret penance.”

The church and its doctrine are the problem. Men who claim absolute, unquestionable power over others will abuse the power and the innocents under their sway. (Catholic nuns are guilty of this abuse too, even in this report, though that isn’t its primary focus.) Any structure or belief system that confers such a power — divine authority — is inherently malicious. In other words, it may not be possible to divorce this kind of abuse from the Church because it’s the Church.

The sheer brazenness of many of these assaults, as detailed in the report, is likewise  probably attributable to the religious power structure.

Priests regularly produced, distributed, and shared child pornography among themselves, according to the report. (See, for example, pages 339, 375, 404, 416, 462, 526, 532, 553, 578.) Four priests forced a boy to pose, naked, like “the image of Christ on the cross.” The “photographs were added to a collection of similar photographs depicting other teenage boys.”

There were even photos of at least one priest actually “sexually abusing children.” He was not prosecuted because the church promised the District Attorney of Carbon County that he would be transferred to a new parish.

Institutionalizing the rape and torture of children.

The cross is an ancient torture and execution device — an odd choice as the symbol for a religion. Catholic priests in the Pittsburgh Diocese found a modern and insidious use for the cross, one that harkened back to the bygone era of torture. They would gift the most pliable, reticent victims with a gold cross, marking the children for torment by their fellow pedeophile priests. According to the report, the crosses “were a visible designation that these children were victims of sexual abuse. They were a signal to other predators that the children had been desensitized to sexual abuse and were optimal targets for further victimization.”

The Church’s power structure and theology are also critical to the Church’s ability to cover up the vast abuse. The Church kept to a seven-step “playbook for concealing the truth,” which relied on its power over congregants. Adherents are already primed to accept absurdities such as wine becoming blood or crackers becoming human flesh if a few choice words are recited, or that three is really one and one is really three.

The popular paraphrase of Voltaire is spot on: “Those who can make you believe absurdities, can make you commit atrocities.” Atrocities such as sending children back to church or Sunday school or Catholic school, despite knowing you’re delivering them into the arms of a predator. Atrocities such as succumbing to the idea that harming the public image of the Church is worse than destroying the innocence of a child. Atrocities such as obeying the church hierarchy at all costs for fear that you’ll be tortured forever in Hell.

Parishioners, police, district attorneys, and, of course, priests, bishops, archbishops, and the Vatican have all been in on the coverup. The number of those who willingly believed absurdities and turned a blind eye to the torture and abuse of children is staggering.

The blame falls, rightly, on the Church.

The Church knew. It kept “secret archives [that] contained incriminating information regarding numerous priests who had molested children.” Access to these secret archives was highly regulated, protected from legal discovery during litigation, and “seldom turned over” to the secular authorities, even when the church was supposed to be coming clean. The secret archives date back to at least 1948.

The Church knew, yet actively shielded the abusers from any accountability, transferring them to new hunting grounds where they would have fresh victims.

Is there a fix?

The statute of limitations has run out on almost all of these cases, and, “as a consequence of the coverup, almost every instance of abuse [the grand jury] found is too old to be prosecuted,” according to the report. In other words, the coverup worked.

The report recommends changes to state law. That must happen. Immediately.

The law must change. Pennsylvania’s legislature needs to hear from you. Please read FFRF’s Action Alert and contact your legislators now.

And then it’s time to ask any observant Catholic you know: “Why haven’t you quit the Catholic Church?”

Andrew L. Seidel is a constitutional attorney and the Director of Strategic Response at the Freedom From Religion Foundation. His first book The Founding Myth: Why Christian Nationalism Is Un-American was burned by a Tennessee preacher. His second book, American Crusade: How the Supreme Court is Weaponizing Religious Freedom, is due out in 2022. He's won numerous academic awards and holds two law degrees: a J.D. magna cum laude from Tulane University Law School and an L.L.M. from Denver University’s Sturm College of Law. Andrew has a B.S. in neuroscience and environmental studies from Tulane. Before dedicating his life and law degree to keeping state and church separate, Andrew was a Grand Canyon tour guide and an accomplished nature photographer. Andrew has appeared on Fox News to debate Bill O’Reilly, MSNBC, and hundreds of other media outlets speaking on behalf of FFRF.
All Articles by this author
PrevPreviousWelcome to the secular jungle!
NextFFRF comes out strongly weeklyNext