Our labor struggles have a rich history 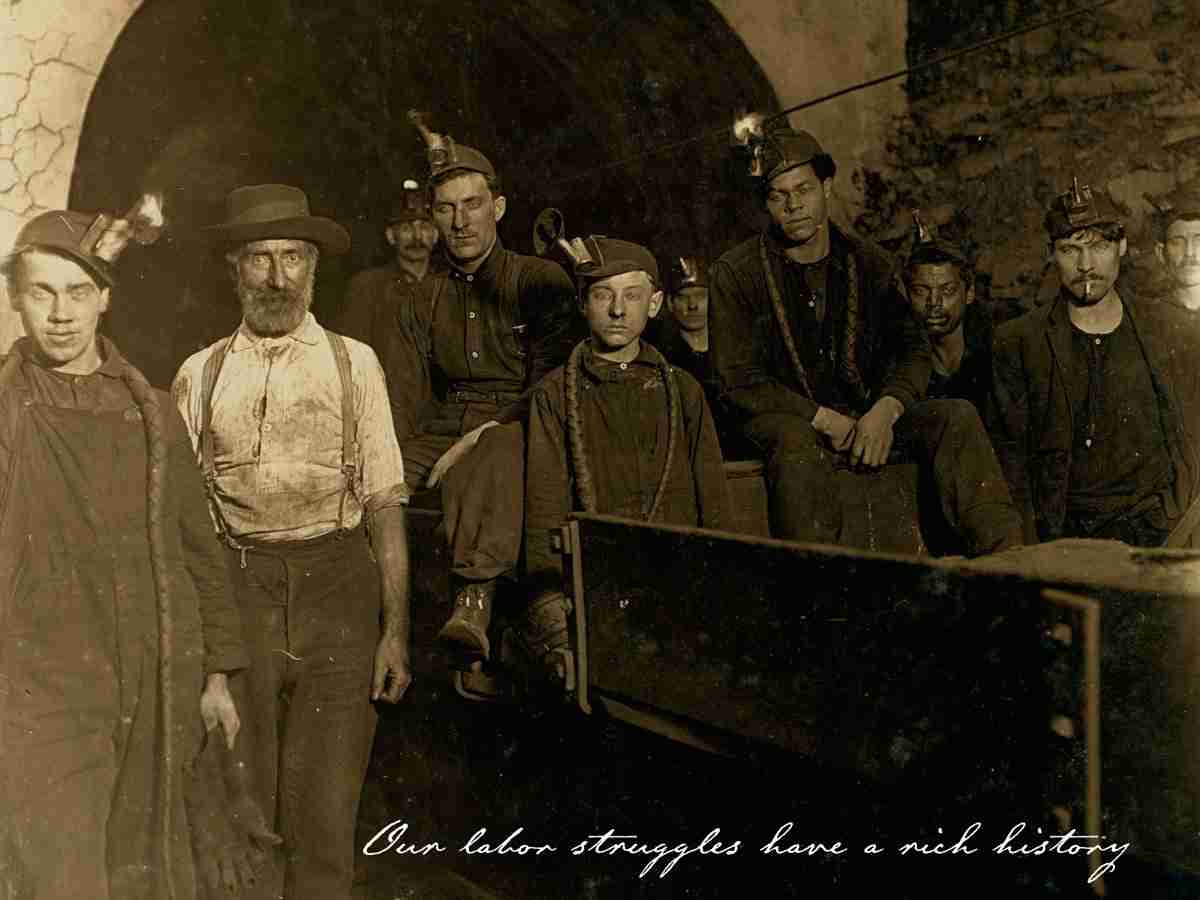 With the recent observance of Labor Day, it is a good time to look back on the history of our labor struggles — including a key confrontation that occurred in my home state 100 years ago.

As the Industrial Revolution snowballed, millions of working folks left farms and took urban factory jobs to support their families. Mass blue-collar workforces grew — but workers often were subjected to exhausting hours, low pay and unhealthy conditions. Their misery spawned an urge to organize for self-protection.

In the 1830s, coal-loaders on Philadelphia’s waterfront were forced to work 16 hours a day, six days a week. They staggered to their slum homes at night, black from coal dust, almost too weary to wash or enjoy their families, only to return before daylight for another 16 hours.

One day, the embittered men abruptly walked off the job and demanded a 10-hour workday. It was a jolt that idled much of the ship wharves. Coal merchants rejected their demand and vowed to hire replacement workers. Some newspapers called the strikers “deluded” and even “freshly imported foreigners who despise and defy the law.”

Then, Philadelphia’s handloom weavers decided that they, too, should have their work hours reduced to 10 per day. They likewise struck. Next, cordwainers (shoemakers) joined the demand. At a rally, speakers denounced the “grinding avarice” of shoe company owners and vowed that cordwainers would no longer be “slaves of heartless monopolists.”

Strikers marched through streets and stormed into the Merchants Exchange. A leader rebuked the “blood-sucking aristocracy” that kept workers subjugated. They wrote a resolution declaring:

As we have nothing to dispose of but our labor, we claim the right of freemen of selling that at such a price as shall enable us to support ourselves, our wives and our families, without becoming objects of public charity.

Meanwhile, gory violence accompanied unionization in some parts of America. My state of West Virginia was a battleground where coal miners were exploited like cattle, and many fought back in armed uprisings. The West Virginia mine wars were legendary. Here’s a brief record:

As coal mining blossomed in the late 1800s, thousands of immigrants and blacks poured into southern West Virginia for dirty, dangerous coal jobs. The diggers mostly lived in company camps, were paid in “scrip” tokens spendable only at company stores, and were exploited somewhat like serfs in bondage. Explosions and cave-ins killed multitudes. In 1907, a mine blast at Monongah, W.Va., took nearly 400 worker lives. One historian said American combat troops in World War I had better survival rates than West Virginia miners.

Appalachian Heritage magazine told how a large coal company store at Whipple, Fayette County, was a fortress for armed guards, a mortuary for killed miners, a citadel for subjugating miner families, a place where any gossip about union organizing led to swift dismissal — and even a place where some desperate miner wives were coerced to trade sex for food for their hungry families.

After the store was abandoned, a purchaser found it contained odd, half-size lunch pails. Old-timers explained: When a miner was killed on the job, his wife and children were evicted from company-owned housing — unless the widow sent a young son, perhaps as young as 8, to become an apprentice digger in the late father’s place. The small pails were for child miners.

In company housing around the store, mine owners arranged an ethnic mix of Black miners, local Appalachian whites and imported foreign-speaking immigrants — to prevent workers from associating and trying to form a union. Assemblies by miners were forbidden.

As the stormy labor-organizing movement grew, disguised Baldwin-Felts guards were planted as supposed clerks in the Whipple store to listen for hints of union talk. Others were sent into mines posing as diggers for the same purpose. Any miner who “talked union” was fired and his family evicted. The Whipple store had an embalming room in the basement for accident victims, and a special floor for coffins.

A secluded upstairs chamber was called the “rape room” by oldsters. If a miner’s wife or teen-age daughter couldn’t afford shoes, she was taken there by a guard who demanded that she earn them in bed. Miners were paid in company-issued “scrip” tokens redeemable at the store. But there also was a special paper scrip, which some miner wives called “Esau” after the bible’s story of a starving elder son who sold his birthright to a younger brother for food. The paper scrip worked like this:

If a miner became injured or sick and couldn’t go into the mines, his family soon ran out of food and became desperate. If his wife begged for rations at the Whipple store, she was issued the paper credit — on agreement that she would repay later in cash or in sexual favors for guards and supervisors. She didn’t dare tell her husband, and often tried to avoid the sexual payback.

The mine wars were America’s worst conflict since the Civil War, and the worst labor violence in American history. They involved the Army and military aircraft, plus civilian planes dropping homemade bombs. The newly formed United Mine Workers attempted to unionize diggers, which brought fierce resistance. Mine owners hired armed guards. Brutality abounded. Union organizers — including the tough-talking Mary “Mother” Jones — were repeatedly jailed.

By 1919, southern counties were a major nonunion zone. Mine owners paid Logan County Sheriff Don Chafin — a political dictator who controlled every public job in the county — to hire many “deputies” to beat and expel union agents and miners who attended organizing sessions. Chafin’s sheriff salary was $3,500 a year, but a later inquiry learned that mine owners paid him about $33,000 more annually. He grew rich — and brutal.

Police Chief Hatfield, ruled innocent in the “Matewan Massacre,” was charged with a different shooting at a coal camp in adjoining McDowell County, along with a companion. As the two walked up the steps of the McDowell courthouse for a hearing, Baldwin-Felts men in the crowd stepped out and shot them both to death.

The murders inflamed union miners. They rallied at the Capitol in Charleston and vowed to march southward like an army. Union leaders roused workers to arm themselves. In Logan County, Sheriff Chafin had been preparing for such an invasion. He enlarged his deputy legion to around 700, brought in machine guns, and built war-style breastworks on Blair Mountain, a natural barrier shielding the county seat of Logan. Chafin also engaged his own air force: three rented biplanes to scout for approaching mobs and drop homemade bombs on them.

About 5,000 red bandanna-wearing “rednecks” gathered and headed south on Aug. 24, 1921. More joined them along the way, swelling the throng to an estimated 10,000 to 15,000. As the first groups approached Blair Mountain, some strikers hijacked a train and backed it fifteen miles to transport fighters.

Full-scale warfare between defenders atop Blair and strikers below ensued for several days. Chafin’s forces included state troopers, militiamen, Baldwin-Felts guards and deputized Logan county residents. Numerous bullets were fired in the woodland, but casualties were surprisingly light, perhaps under 20. Nobody knows an accurate body count.

President Harding sent federal troops from Kentucky, plus an air squadron under war hero Billy Mitchell from Langley Field near Washington. Mitchell’s biplanes landed in an open field near Charleston — but six got lost and crashed in mountains en route.

Rather than fight the Army, strikers withdrew. Many hid their guns in the woods, took off their red bandannas, and slipped away.

After the Battle of Blair Mountain, grand juries returned 1,217 indictments, including 325 for murder and 24 for treason. But the charges mostly evaporated. However, the mine wars wiped out most of the United Mine Worker’s funds and left it weak. By 1924, it had lost about half of its West Virginia members. Unions remained under severe attack until 1933, when President Roosevelt’s New Deal legalized the right of workers to organize.

Around America, various other violent conflicts and massacres accompanied the growth of labor unions. The right of workers to seek better conditions slowly won the eight-hour workday, the five-day workweek, a minimum wage, abolition of child labor and many other benefits. Support of unions became a bedrock principle of liberal politics.

President Carter remarked: “Every advance in this half-century — Social Security, civil rights, Medicare, aid to education, one after another — came with the support and leadership of American labor.”

In a 1961 essay titled “If the Negro wins, labor wins,” Martin Luther King Jr. wrote: “Our needs are identical to labor’s needs: decent wages, fair working conditions, livable housing, old-age security, health and welfare measures. … That is why the labor-hater and labor-baiter is virtually always a two-headed creature spewing anti-Negro epithets from one mouth and anti-labor propaganda from the other mouth.”

But economic and technological trends slowly undercut the union movement. As jobs grew more specialized and individualized — and machines took over many tasks — the need for blue-collar armies shrank. Unions were squeezed to the sidelines.

In the 1950s, when American manufacturing boomed, about one-third of all workers carried union cards. But steady erosion occurred. Today, less than one-tenth of private-sector workers are union members.

Conservative legislators work incessantly to destroy unions. Right-to-work laws — designed to break unions by letting some employees refuse to join locals and also refuse to contribute payments for collective bargaining — have been passed in many American states.

The retreat of unions is among a few sectors in which conservatives have scored greater success than progressives. That should not distract us from the many social gains that unions have won over the years — sometimes fighting pitched battles to attain their goals.

This column is adapted from a portion of Haught’s 2016 book, Hurrah for Liberals, that was republished on Aug. 16, 2021, at Daylight Atheism.

James A. Haught, syndicated by PeaceVoice, was the longtime editor at the Charleston Gazette and has been the editor emeritus since 2015. He has won two dozen national newswriting awards and is author of 12 books and 150 magazine essays. He also is a senior editor of Free Inquiry magazine and was writer-in-residence for the United Coalition of Reason.
All Articles by this author
PrevPreviousFFRF salutes Hispanic Heritage Month
NextWomen’s rights, Sept. 11, Richard Dawkins & the DennettsNext