What a fortnight! We at the Freedom From Religion Foundation were focused on our annual convention (forcing us to skip last week’s wrap), though we were able to accomplish a whole lot else, too, in the last two weeks. 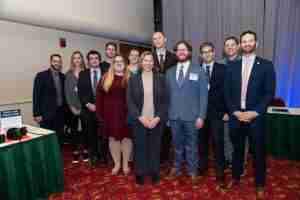 It was such a treat for us to host almost 700 of you in our hometown of Madison, Wis., over the past weekend. We all got to listen to a tremendous lineup of speakers, including authors Sarah Vowell, Jeff Sharlet (of The Family fame) and Amber Scorah, an ex-Jehovah’s Witness. Joining them were not one but two members of Congress: Reps. Mark Pocan and Jamie Raskin. And entertaining the audience were the Liberal Redneck and America’s Best Christian (Trademarked). We already have most speeches up on our website. You can also watch many of the highlights on our Facebook Live “Ask An Atheist” feature this week. 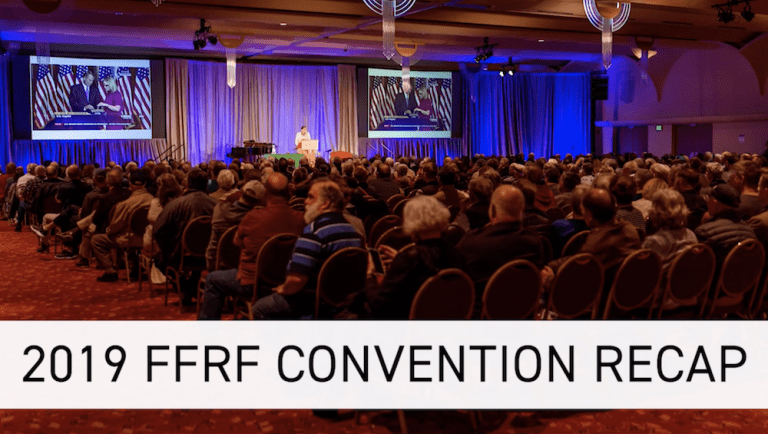 And you can hear excerpts from many of the speeches on our radio show. Most speeches will be reprinted in upcoming issues of Freethought Today. Look for a whole convention section in the upcoming November issue.

Check it all out!

Our ad rules the waves
The convention wasn’t half of it. Early last week, our freethinking Ron Reagan ad that ran during the Democratic primary debate broke the Net. His name became the top trending search on Google during the debate (beating out Bernie, Joe, Elizabeth and all the other candidates). The media extensively wrote about the ad. “It just shows how much of an impact a freethought perspective can have, if it’s given a chance,” FFRF Co-President Annie Laurie Gaylor commented. (Note: ABC refused to run our ad during the previous Democratic primary debate.)

A pastor burns our book
Another media circus unexpectedly hit us this week. A Southern preacher, in all his wisdom, chose to burn FFRF Director of Strategic Response Andrew Seidel’s new book, The Founding Myth, and disseminate it on social media. “Pastor Greg Locke fails to understand something that FDR explained some 80 years ago: ‘Books cannot be killed by fire,’” Andrew responded. 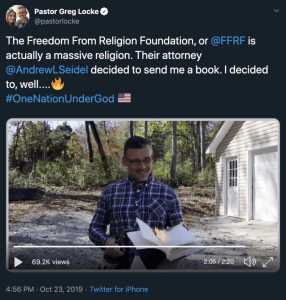 On our “Newsbite” segment this week, Andrew explains why the burning of his book evoked a complicated reaction within him. 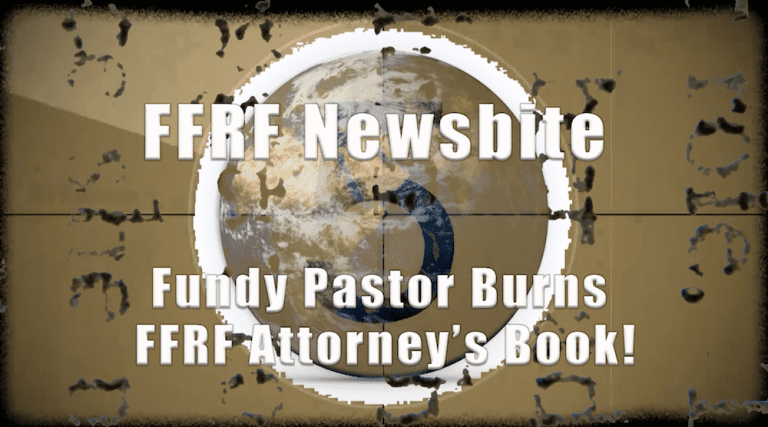 Stop it, you theocratic officials!
Even all of this didn’t distract us from one of our core missions: keeping this country true to its secular constitutional principles. This often involves calling out theocratic officials when they violate these precepts, and there’s recently been a whole bunch of them. Attorney General William Barr and Secretary of State Mike Pompeo actually made Christian Nationalist speeches on the very same day. Housing and Urban Development Secretary Ben Carson turned a White House cabinet meeting this week into a Christian farce. And Kentucky Gov. Matt Bevin held a preacher-populated rally at his mansion. We formally objected in all instances, and created media buzz in the process. “The Freedom From Religion Foundation announced Wednesday its intent to investigate Gov. Matt Bevin’s recent meeting with Kentucky pastors and to ‘halt the Kentucky governor’s misuse of official resources,’” reports the Louisville paper.

Freethinking scholars impart their wisdom
Even in the midst of all this hubbub, our “Freethought Matters” TV show forged ahead. Last week, we had a fascinating guest: former fundamentalist preacher turned religious studies scholar (with a secular perspective) Hector Avalos. 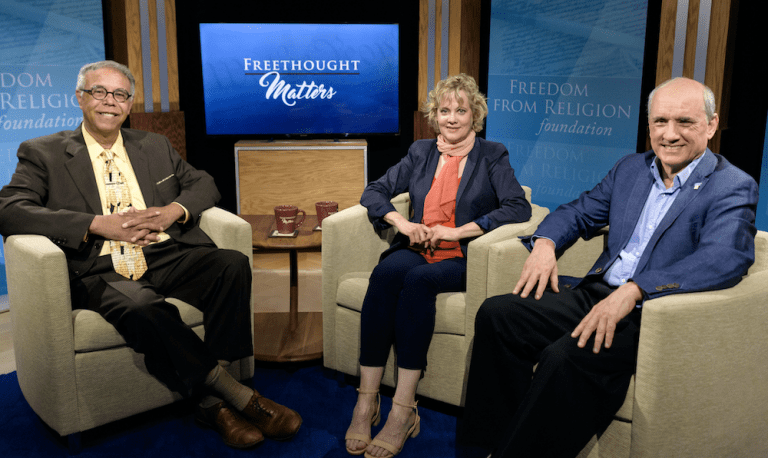 And this Sunday, we offer a lively pioneer of secular studies: Pitzer College Professor Philip Zuckerman, who established the country’s first secular studies program at that institution. “Secularism with its emphasis on empathy, ethical living, compassion, being in the here and now, it’s the only way we’re going to solve any problems,” Zuckerman says on the show. Check out the listings for your major urban center. Or watch it anytime on our YouTube channel. 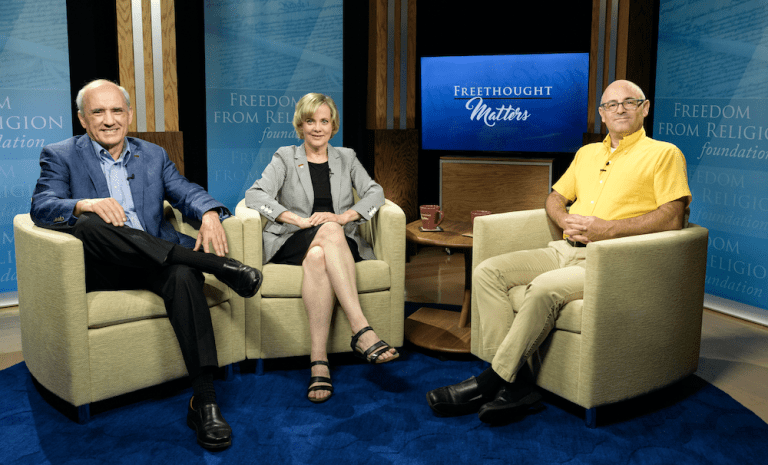 The past two weeks were beyond hectic but highly productive — and we were able to handle all of the frenzy only due to you and your warm support.