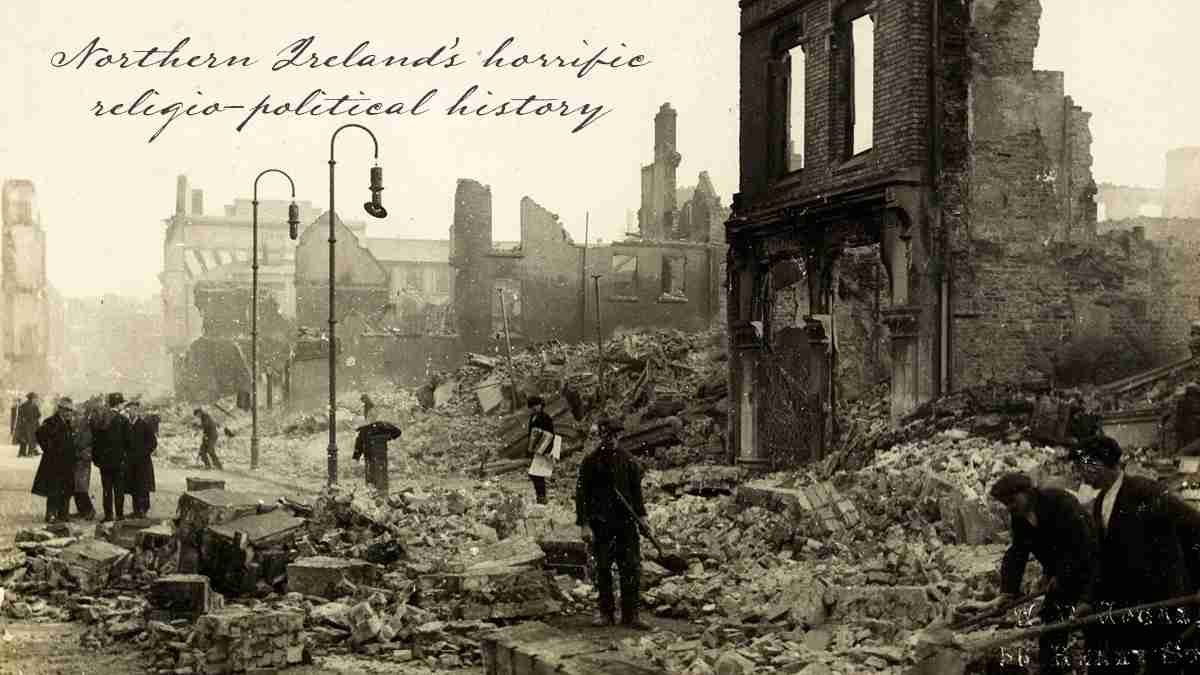 A major consequence of departing British Prime Minister Boris Johnson’s Brexit gambit could be the disruption of the fragile peace in Northern Ireland.

Back in 1986, I went with an editor group to that part of the world and saw religio-political horror in full bloom. Belfast “interface streets” between Catholic and Protestant neighborhoods had 20-foot-high “peace walls” — barricades to prevent snipers on either side from shooting families on the other side — that didn’t, however, prevent Molotov cocktails from being lobbed across.

British police checkpoints and armored vehicles were everywhere, with officers wearing bulletproof vests and carrying machine guns. Barbed wire surrounded some buildings. Newspapers told of Catholic-Protestant bombings and assassinations. On the day before we arrived, a teenage Protestant military recruit was murdered and his fiancee blinded by a bomb in their car dashboard. Police stations listed assassinated officers.

Our group listened to a sermon by Rev. Ian Paisley, a fiery Protestant who denounced “bachelor priests” and “papists.” He called the Catholic mass “a blasphemy and a deceit.”

We went to the Sinn Fein political headquarters, heavily barricaded home of Catholic resistance to British and Protestant rule. My most vivid memory was stacks of Sinn Fein magazines praising Catholic “freedom fighters” who killed Brits and “Prods.” One account praised assassins who walked up behind a university professor and shot him in the head. Catholics suspected of being friendly with Protestants were “kneecapped” by pistol shots.

I felt like I was in a lunatic asylum where murder was lauded.

We met Martin McGuinness, a sandy-haired youngish leader who had served two prison terms for terrorism. He was earnest and passionate as he recited British and “Prod” atrocities against Catholics. He said he and fellow Sinn Fein leaders were marked for death by the enemy.

Leaders boasted that Northern Ireland’s “troubles” were fading. They said the previous year had brought only 54 assassinations, 148 bombings, 237 shooting episodes with 916 woundings, 31 kneecappings, 522 terrorism arrests and seizure of 3.3 tons of weapons and explosives — all in a tiny land at the time of 1.5 million people, smaller than most American states.

Was Ulster’s horror purely religious? No. I guess that some of the killers on both sides never went to church, but being born Catholic or Protestant put them into enemy camps. University intellectuals have called this “religious tribalism.”

Hilariously, Christopher Hitchens narrated the story of armed men stopping passersby and demanding: “Are you Protestant or Catholic?” If the accosted person replied, “Neither, I’m an atheist,” the retort came: “Yeah, but are you a Catholic atheist or a Protestant atheist?”

Six years after our editor visit, a Protestant killer disguised as a journalist entered the stockade-like Sinn Fein headquarters and murdered three. Catholic killers retaliated by blowing up a van containing eight Protestants. Then, Protestants retaliated by shooting five Catholics at a betting shop. On and on the murder cycle went.

This cycle actually began in 1609, when King James of Bible fame rewarded English and Scottish commanders with rich farmland in the northern counties called Ulster. Former Catholic owners were driven into the hills. Bitterly, they joked that “Protestants got the land and we got the view.”

Persecution of Irish Catholics persisted for centuries. Oliver Cromwell’s Puritan army massacred them in the mid-1600s, calling it a “righteous judgment of God.” Catholic worship was outlawed in the 1700s and priests were expelled. Then in the 1800s, it was allowed again, but Catholics were required to pay Protestant tithes, triggering a brief “Tithe War.”

Mutiny continued intermittently until after World War I, when the Catholic-dominated south of Ireland finally broke free from British rule. But Protestant-dominated Ulster counties remained a loyal British province, where Catholic-Protestant strife took about 3,000 lives over the next some decades. In the 1990s, a fitful peace finally grew in Ulster. Old mortal enemies Paisley and McGuinness became government leaders together.

It is this peace that is in jeopardy due to the discontent that Brexit has caused among Ulsterites.

This column is adapted and updated from a piece originally published on Jan. 21, 2017, in The Charleston Gazette-Mail.

James A. Haught, syndicated by PeaceVoice, was the longtime editor at the Charleston Gazette and has been the editor emeritus since 2015. He has won two dozen national newswriting awards and is author of 12 books and 150 magazine essays. He also is a senior editor of Free Inquiry magazine and was writer-in-residence for the United Coalition of Reason.
All Articles by this author
PrevPreviousWe need to stand up for facts — not fiction
NextMitch McConnell, Clarence Thomas, ex-NFL preachers and baptizing sheriffsNext