Skip to content
PrevPreviousFFRF had all hands on deck
NextTime to celebrate!Next

No preacher, the police are not “sent by God to punish evildoers”

Those who rely on the bible for guidance on law enforcement are completely misguided. Pastor Robert Jeffress of First Baptist Church in Dallas made an interesting claim shortly after the Dallas shooting:

The New Testament says in Romans 13:4 that law enforcement officers are ministers of God sent by God to punish evildoers. When you think about it, police officers are just as called by God to do what they do as pastors and priests are called by God. 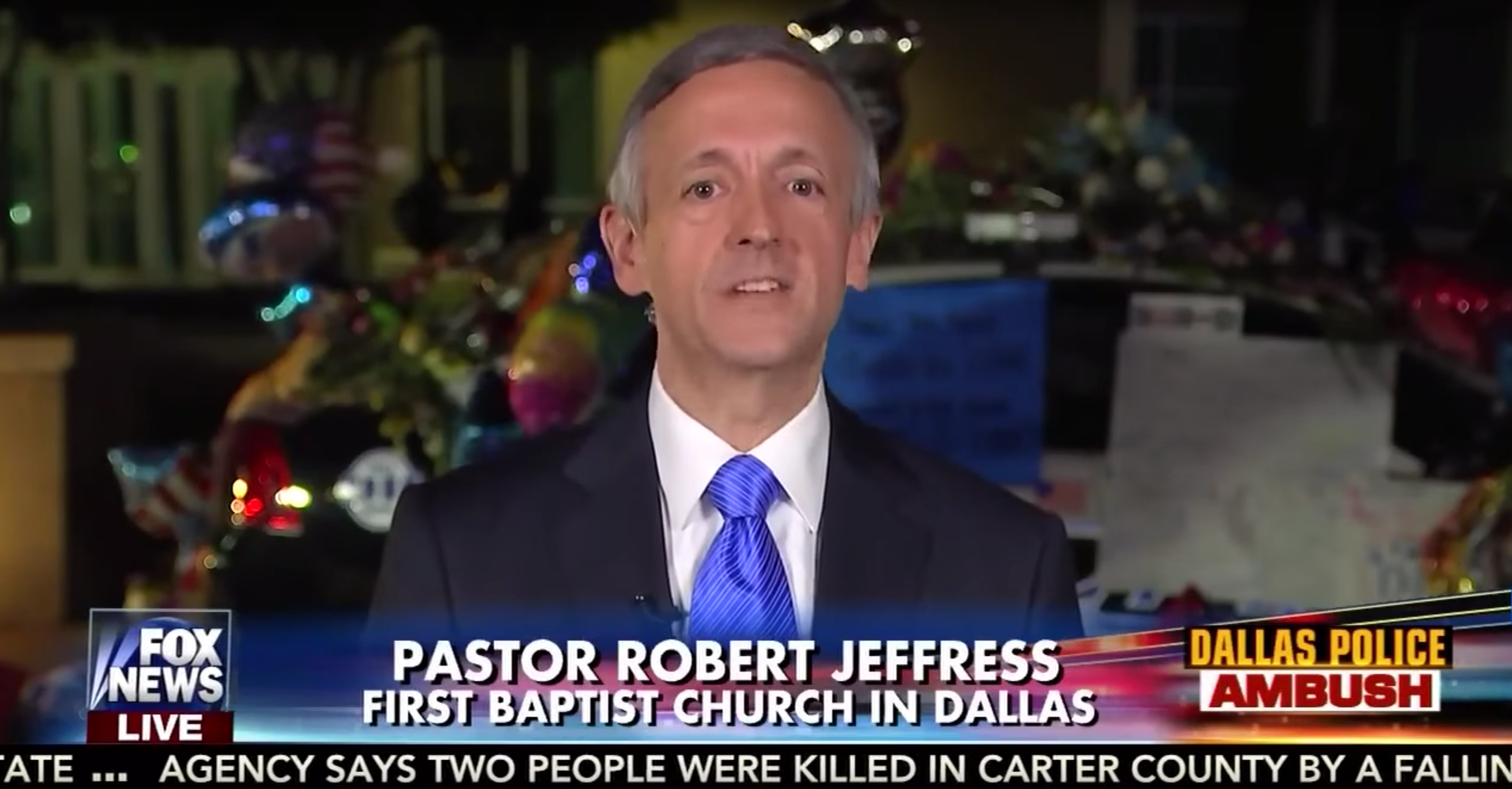 Jeffress is not known for his grasp of humor, facts (9/11 was God’s punishment on America for abortion), politics, Mormonism or Islam (which he thinks are heresies “from the pit of hell”), or for his measured rhetoric on LGBT issues (he thinks that the “the greatest threat to freedom of religion in America is not ISIS, it’s the Chamber of Commerce.”) So, his connecting the bible and policing is not surprising.

But as outlandish as his claims are, Jeffress’s reliance on Romans 13:4 is not as unconventional as one would think. A few weeks ago, FFRF successfully removed a “Romans 13:4” decal from police vehicles in Harper, Kansas.

Before that, Sheriff Grady Judd preached the verse in his Polk County (Fla.) Sheriff’s uniform in churches. Judd claimed that his “profession is ordained by God,” and cited Romans 13:4. The verse is also associated with police on countless websites.

Jeffress, Judd, and the rest are wrong. Law enforcement in this country is not “ordained by God.” We live in a secular democratic republic established by a godless constitution, not a theocracy based on a book of archaic fables. Romans 13 reads:

1 … For there is no power but of God: the powers that be are ordained of God.

2 Whosoever therefore resisteth the power, resisteth the ordinance of God: and they that resist shall receive to themselves damnation.

3 For rulers are not a terror to good works, but to the evil. Wilt thou then not be afraid of the power? do that which is good, and thou shalt have praise of the same:

This is problematic from the first claim—“there is no power but of God: the powers that be are ordained of God.” That idea directly conflicts with the Constitution’s source of power: “We the people.” The people give law enforcement the authority to execute our collective will, not god’s law. This is not a minor linguistic disagreement. It’s a substantial conflict that cuts to the heart of the American Constitution, from which any mention of god is conspicuously absent.

There is also something perverse about law enforcement referring to themselves as “revengers,” “bearing swords,” and “executing wrath,” when their true job is to “protect and serve,” as the LAPD motto says. It is not for the police to mete out biblical punishments or divine wrath. In fact, it is not for the police to hand down any punishment. That role is reserved for our judicial system. The police do not determine innocence or guilt or what punishment the guilty should face. The founders chose to separate the judicial, executive, and legislative branches of government to avoid the very conflict this verse promotes.

So applying Romans 13 to American law enforcement is trebly wrong:

Police and preachers who claim this passage has some relevance to law enforcement need remedial American government classes. They might also do a bit of reading on a little thing established by the First Amendment: the separation of state and church.

Andrew L. Seidel is a constitutional attorney and the Director of Strategic Response at the Freedom From Religion Foundation. His first book The Founding Myth: Why Christian Nationalism Is Un-American was burned by a Tennessee preacher. His second book, American Crusade: How the Supreme Court is Weaponizing Religious Freedom, is due out in 2022. He's won numerous academic awards and holds two law degrees: a J.D. magna cum laude from Tulane University Law School and an L.L.M. from Denver University’s Sturm College of Law. Andrew has a B.S. in neuroscience and environmental studies from Tulane. Before dedicating his life and law degree to keeping state and church separate, Andrew was a Grand Canyon tour guide and an accomplished nature photographer. Andrew has appeared on Fox News to debate Bill O’Reilly, MSNBC, and hundreds of other media outlets speaking on behalf of FFRF.
All Articles by this author
PrevPreviousFFRF had all hands on deck
NextTime to celebrate!Next