Skip to content
PrevPreviousThe Supreme Court, the Senate, a governor — and, above all, you
NextRecord-setting anti-abortion laws show need for Women’s Health Protection ActNext

Nine decades of secular humanism in my lifetime 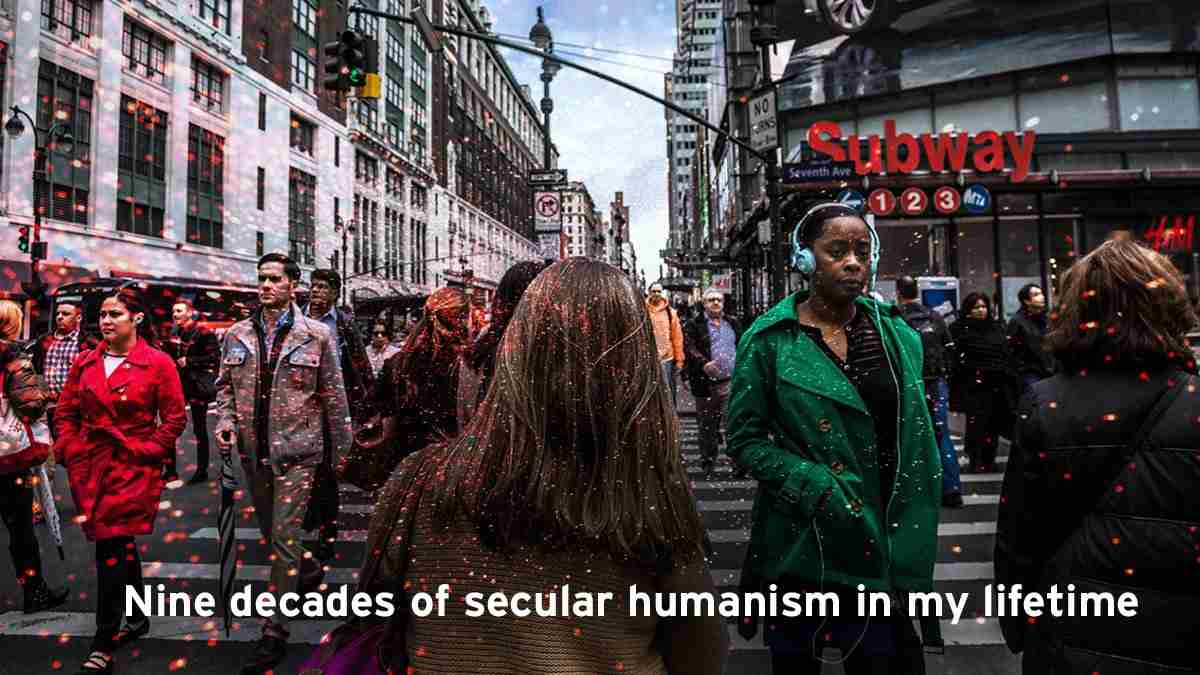 Few people realize it, but secular humanism — the progressive crusade to improve life for all — may be the chief driving force of Western civilization.

Humanism means helping people, and secular means doing it without supernatural religion. The movement soared three centuries ago in The Enlightenment, when bold thinkers sought to end the divine right of kings, end church abuses, create democracy, launch human rights, halt the privileges of aristocrats, and bring other reforms such as personal equality, free speech and a social safety net.

Thomas Hobbes envisioned a “social contract” in which people granted power to the government to gain protection. John Locke sought separation of church and state. Baron Montesquieu outlined a democracy with judicial, executive and legislative branches. Voltaire sneered at Christianity as “the most ridiculous, the most absurd and bloody religion that ever infected the world.” Baruch Spinoza was excommunicated by Jews for doubting a personal god. Francis Bacon developed the scientific method of seeking facts. David Hume said scientific inquiry makes miracles implausible.

Enlightenment ideas were absorbed by America’s radical Founders and incorporated into the first modern democracy. But progress was slow, requiring many painful battles against conservatives. The horrible Civil War was needed to end slavery. Suffragists endured a long struggle before women could vote. Margaret Sanger went to jail repeatedly to gain couples a right to use birth control.

I was born in 1932, when Franklin Roosevelt won the White House and obtained major secular humanist advances. His New Deal passed Social Security pensions for retirees, gave unions a right to organize, provided unemployment compensation for the jobless and workers compensation for those injured at work, banned child labor, set a 40-hour workweek and a minimum wage, created food stamps and welfare for the poor, launched massive public works to make jobs, created the Federal Deposit Insurance Corporation to protect bank depositors, and much more.

But fundamentalist taboos remained strong in America. When I came of age in the 1950s, gay sex was a felony, and homosexuals hid in the closet. It was a crime for stores to open on the Sabbath. It was illegal to look at something like a Playboy magazine or sexy R-rated movie — or sometimes even read about sex. Blacks were confined to ghettos, not allowed into white-only restaurants, hotels, clubs, pools, schools, careers or neighborhoods. Interracial marriage was illegal. About half the schools had government-mandated prayers, and many biology classes didn’t mention evolution. Birth control was illegal in some states. Desperate women couldn’t end unwanted pregnancies, except via back-alley butchers. Unwed couples couldn’t share a bedroom. Other Puritanism was locked into law.

All those born-again strictures were later wiped out, one after another. Human rights and personal freedoms snowballed. Society changed so radically that it’s hard to remember the old “thou shalt nots.”

A 1987 high court ruling forbade public schools to teach “creationism.” Other progressive advances included marijuana legalization in many states, and the beginning of “right to die with dignity” laws. Finally, the collapse of the Trump era and the disintegration of supernatural religion in Western democracies are more victories for secular humanism.

Decade after decade, progressive reformers defeated bigoted religion and right-wing political resistance to wipe out hidebound strictures. Barely noticed, humanist advances helped billions. Wars between nations have nearly ceased in the past half-century. In the 1800s, life expectancy averaged around 30 because of high childhood deaths, but now it’s past 70. Literacy and education have soared. Famines have almost vanished.

I’ll be 90 on my next birthday. My nine decades have seen wonderful progress.

The marvelous rise of secular humanism in a single lifetime — greatly improving life for all — paints a much-brighter hope for humanity. Let’s keep striving for more advances.

This column is adapted from a piece in the October-November 2021 issue of Free Inquiry.

James A. Haught, syndicated by PeaceVoice, was the longtime editor at the Charleston Gazette and has been the editor emeritus since 2015. He has won two dozen national newswriting awards and is author of 12 books and 150 magazine essays. He also is a senior editor of Free Inquiry magazine and was writer-in-residence for the United Coalition of Reason.
All Articles by this author
PrevPreviousThe Supreme Court, the Senate, a governor — and, above all, you
NextRecord-setting anti-abortion laws show need for Women’s Health Protection ActNext