My adventures in the Bible Belt 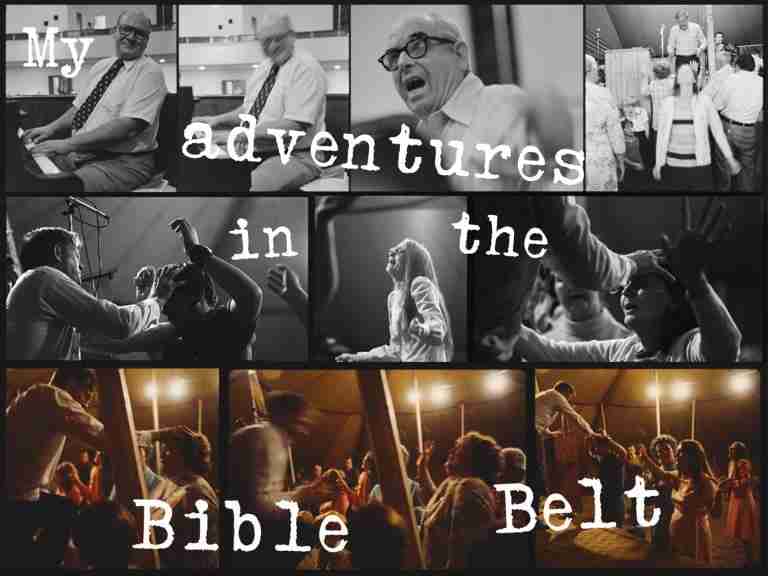 For many years, I was my newspaper’s religion reporter and, believe me, I met some amazing denizens of Appalachia’s Bible Belt.

Consider Clarence “Tiz” Jones, the evangelist-burglar. He had been a state champion amateur boxer in his youth, but succumbed to booze and evil companions, and spent a hitch in prison. He was subsequently converted and became a popular Nazarene revivalist. He roved mountain communities, drawing big crowds, with many coming forward to be saved.

But police noticed a pattern: In towns where Jones preached, burglaries happened. Eventually, officers charged him with a break-in. This caused a backlash among churches. Followers said Satan and his agents were framing the preacher. They formed a “Justice for Tiz Jones” committee and staged protest marches. Then Jones was nabbed red-handed in another burglary, and his guilt was clear. He went back to prison.

Another spectacular Appalachian minister was “Dr.” Paul Collett, a faith-healer who claimed he could resurrect the dead — if they hadn’t been embalmed. Collett set up a big tent in my town of Charleston and drew multitudes, including many in wheelchairs and on crutches. The healer said he had revived a corpse during a previous stop. He urged believers to bring him bodies of loved ones, before embalming.

Collett moved his show into a former black movie theater and broadcast over radio stations. One night, he claimed “a cancer” fell onto the stage. Another night, he said he turned water into wine. I attended a service and wrote a skeptical account, focusing on his many money collections. After the article appeared, 40 of Collett’s followers invaded my paper’s newsroom. Luckily, it was my day off. The night city editor called the police and also summoned burly printers from the type shop, who backed the throng out the door.

Collett claimed to have 10,000 adherents. For five years, he collected money to build a 12-doored “Bible Church of All Nations,” which was to be “the biggest tabernacle in West Virginia.” Then he moved to Canada, leaving not a rack behind.

He returned some years later and preached at a serpent-handling church in a mountain hollow. (I often wrote about the ardent rural worshipers who pick up buzzing rattlesnakes and thrust their hands into fire to show their faith. They’re earnest and decent people — even though they have a high mortality rate during prayer services.)

The leader of the serpent church, who never took money from members, began to suspect that Collett was bilking his congregation. In an Old Testament-type showdown, the two ministers scuffled, one shouting “Manifest him, Lord!” and the other yelling “Rebuke the devil!”

Then, Collett vanished for good. Meanwhile, the serpent churches spawned other tales:

Once, a weekly newspaper printed photos of a church wedding in which the bride and groom each held a rattler.

Another time, we heard that politicians in a rural county allowed serpent-handlers to meet in the dilapidated courthouse. Some snakes escaped into crevices in the walls — and emerged weeks later, causing bedlam among courthouse employees.

A University of Charleston sociologist, Nathan Gerrard, studied the serpent phenomenon. He administered a psychological test to the serpent flock, and gave the same test to a nearby Methodist congregation as a control group. The serpent-handlers came out mentally healthier.

On one occasion, the great Harvard theologian Harvey Cox accompanied Gerrard and me to a serpent church. When the worshipers began their trance-like “dancing in the spirit,” we were surprised to see Professor Cox leap up and join the hoofing.

Meanwhile, the parade of colorful evangelists never stopped. One was faith-healer Henry Lacy, who handed out calling cards saying simply “Lacy the Stranger.” He often came into our newsroom to lay hands on reporters to cure their hangovers. He once offered to halt a cold wave if state officials would return his driver’s license, which had been confiscated.

And there was a roving healer, A.A. Allen, who visited West Virginia with jars containing bodies that he said were demons he had cast out of the sick. (Skeptics said they were frogs.) He vanished after a revival at Wheeling, and was found dead of alcoholism in a San Francisco hotel room with $2,300 in his pocket.

There’s also the tale of when “the Plastic Eye Miracle,” the Rev. Ronald Coyne, visited town. He was a former Oklahoma farm boy who was blinded in one eye by a piece of baling wire. He said a faith-healer enabled him to see through his artificial eye. Several of us in the audience wrapped tape over his good eye, and he read aloud items we handed him, using his empty eye socket. It seemed legitimate, and I was mystified. I guessed that maybe his optic nerve had regenerated a glimmer of vision.

Those were heady days in the Bible Belt, before evangelists created million-dollar TV empires and became the ayatollahs of the Republican Party. The holy rovers of yesteryear provided marvelous theater. Today’s mountain religion seems pale in comparison.

This column is adapted from a piece originally published in the Charleston Gazette-Mail on Dec. 7, 1993, and reprinted in Haught’s 2008 book, Fascinating West Virginia.

James A. Haught, syndicated by PeaceVoice, was the longtime editor at the Charleston Gazette and has been the editor emeritus since 2015. He has won two dozen national newswriting awards and is author of 12 books and 150 magazine essays. He also is a senior editor of Free Inquiry magazine and was writer-in-residence for the United Coalition of Reason.
All Articles by this author
PrevPreviousThe Internet gives doubters a home
NextA Supreme disaster, a congressional agenda, a prayerful governor & a Hollywood legendNext