Skip to content
PrevPreviousExistentialism: a philosophy for secular humanists
NextWe stood up for science in front of a fundamentalist coffeeshopNext

We at the Freedom From Religion Foundation believe in using every possible medium of communication to disseminate our message.

We released exclusive audio evidence to the media revealing how the White House secretly turned the Paycheck Protection Program into a multibillion-dollar tax handout for churches and religious leaders — the first time in U.S. history that public funds have been used in this way. President Trump rewarded his most fervent supporters with billions of tax dollars in clear violation of the Constitution. 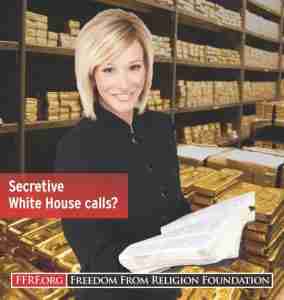 We also issued a statement condemning the Catholic Church for raking in billions of taxpayer pandemic relief money. The Church successfully lobbied to be exempted from a Small Business Administration rule disqualifying Paycheck Protection Program applicants with more than 500 workers. “Without this preferential treatment, many Catholic dioceses would have been ineligible,” notes the Associated Press. 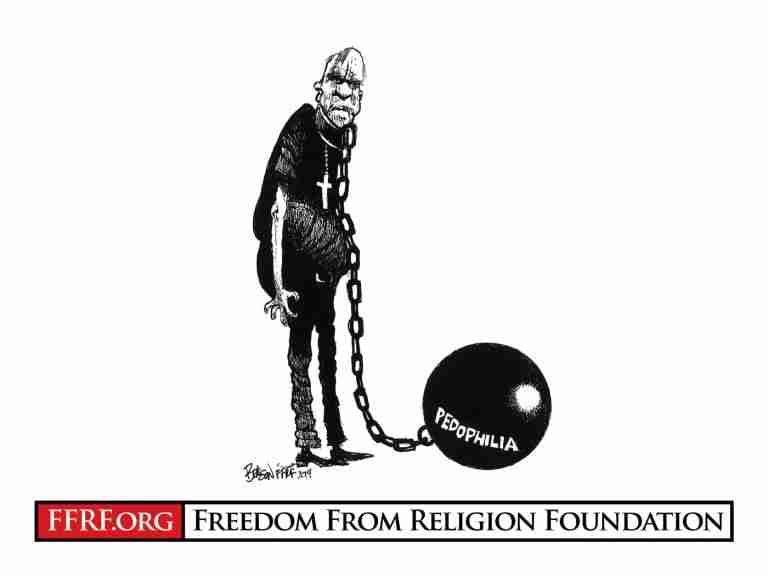 A commission set up by Mike Pompeo released an odious report claiming that rights are God-given — and we subjected it to a devastating critique. Not only is our freedom not a gift from God, it is guaranteed by a godless document: the U.S. Constitution. The report from Pompeo’s commission is antithetical to this American principle, and is thus un-American, we contended.

A message for our time
We put up a billboard in Denver (thanks to a local donor and FFRF’s Denver chapter) with a message that couldn’t be more timely: “Practice social distancing between church and state.”

“Practicing distancing is extremely important these days,” noted FFRF benefactor Monty C. Cleworth. “Not just distancing for COVID reasons, but also distancing between church and state. We wouldn’t want to transmit anything that is unhealthy and dangerous.” 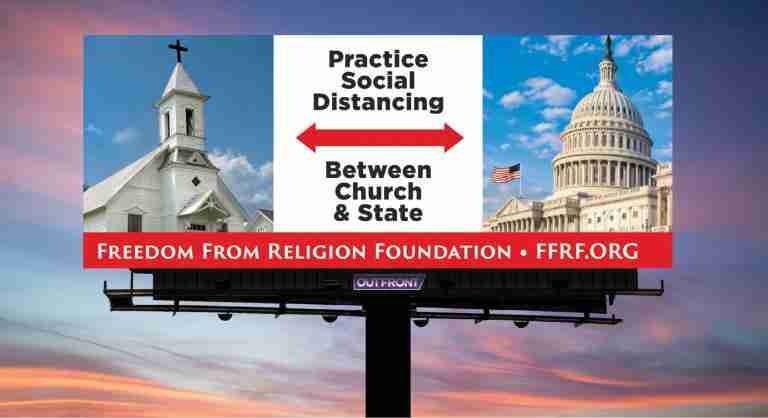 No mask exemptions in the Lone Star State!
We sent a letter to Texas Gov. Greg Abbott urging him to revoke an ill-advised mask-wearing exemption for churchgoers. We pointed out that since the beginning of this pandemic, houses of worship have repeatedly been shown to be COVID-19 hotbeds, including in Texas itself. Plus, the exemption is in violation of a document called the Constitution.

“The Supreme Court has long held that the Establishment Clause ‘mandates government neutrality between religion and religion, and between religion and nonreligion,’” FFRF Co-Presidents Dan Barker and Annie Laurie Gaylor wrote to Abbott. “Exempting religious facilities from the state’s mask order violates this basic stricture.”

“The best protection against the Christian Nationalist agenda is for Christian Nationalism to be soundly rejected,” his piece in the Capital Times concluded. “If not, picture, in the near future, the worst day you are having, in an emergency room, in a medical system rife with religious exemptions, and then the dire consequences of being told that you won’t be treated and need to go somewhere else. Now imagine there’s a pandemic.”

“Crisis Pregnancy Centers are rooted in religion, misinformation and deceit — and public money should not be funding such places,” she writes. “Our tax dollars should instead support science-based comprehensive reproductive health care.” 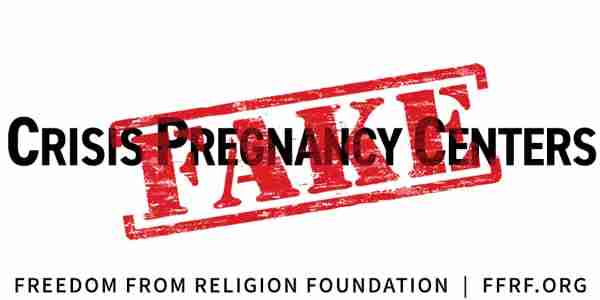 “Somehow, existentialism seems a perfect philosophy for secular humanists — for nonconformists who can’t embrace the majority god-chanting and war-fever chest-thumping and entrenched unfairnesses of society all around them,” he concludes. “It’s for misfit thinkers who see the world as half-loony, so they each seek a private, personal path, outside the mainstream, trying to be honest and devoted to values that seem right to them alone.” 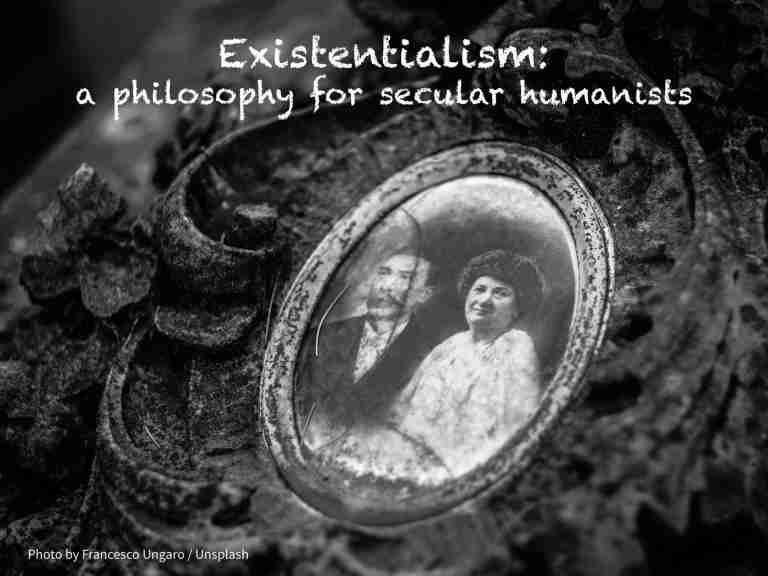 An informative Supreme Court roundup
We are airing our Facebook Live “Ask an Atheist” feature even during the pandemic, and this week we did a critique of the (mostly awful) state/church decisions that the U.S. Supreme Court handed down this session. FFRF Legal Director Rebecca Markert, FFRF Director of Strategic Affairs Andrew Seidel and FFRF Senior Counsel Patrick Elliott had an incisive and informative discussion. 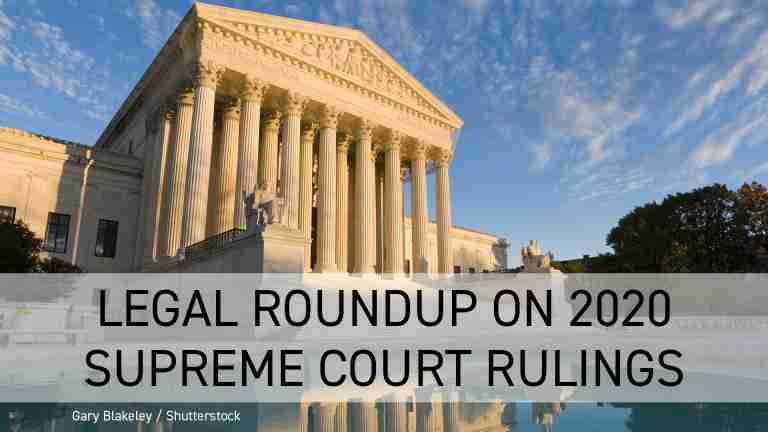 Is state-church separation dead?
Our radio show is also going strong. This week, Dan and Annie Laurie interviewed law professors Nelson Tebbe and Micah Schwartzman regarding their powerful New York Times article, “The quiet demise of the separation of church and state,” after chatting with Ryan about the secretive White House phone calls that we brought to light. 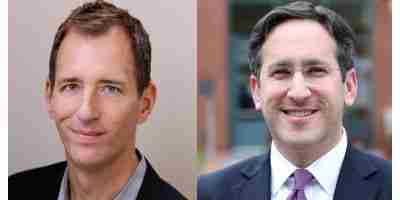 Please fill out our survey!
Last but not the least, you are the focus of another channel we used this week: our membership survey. It’s been five years since our last one. To help us learn more about you, update our membership profile and find out how we can better serve or represent you, please take a few minutes to fill  it out. (Your responses will be completely confidential.) Look for your invitation to take the survey sent to your inbox this Wednesday, July 15, from survey@ffrf.org via member@surveymonkeyuser.com. If you are a current FFRF member and have any problems accessing your survey, please email survey@ffrf.org.

After all, every medium that we use — in fact, everything that we do — is made possible only due to you.

All Articles by this author
PrevPreviousExistentialism: a philosophy for secular humanists
NextWe stood up for science in front of a fundamentalist coffeeshopNext