It’s been a multimedia week beyond belief for us here at the Freedom From Religion Foundation.

In response to an indefensible new South Dakota law mandating public-school display of “In God We Trust,” we’ve put up billboard messages in the state’s most prominent cities, with a biting cartoon by Pulitzer Prize-winning cartoonist Steve Benson as the central image. The billboard has hit a nerve with the governor and one of the law’s sponsors (as this news story shows)! 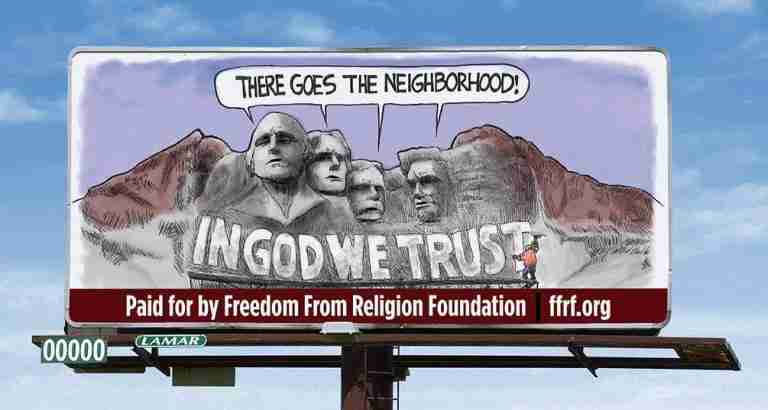 “The Freedom From Religion Foundation has funded billboards in South Dakota’s largest cities to protest a new state law requiring the display of the national motto ‘In God We Trust’ in public schools,” reports the Rapid City newspaper. “Kristin Wileman, press secretary for Gov. Kristi Noem, said the governor recognizes the group’s right to place the advertisements even though she disagrees with their message. … FFRF Co-President Annie Laurie Gaylor said the group hopes that people in South Dakota who are injured by the placement of the motto in public schools would contact her group..”

Annie Laurie explains on our “Newsbite” segment why we felt compelled to respond to the egregious South Dakota law, using the medium that we did. 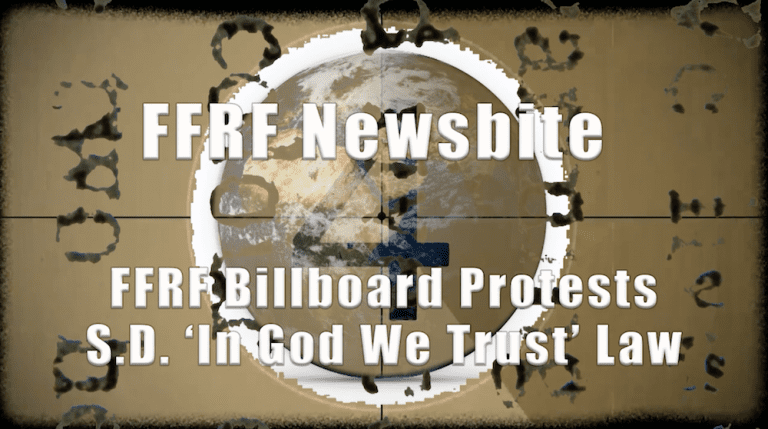 Educating all members of Congress
We also believe in the power of the printed word. That’s why we have sent to each and every member of Congress FFRF Director of Strategic Response Andrew Seidel’s new book The Founding Myth: Why Christian Nationalism is Un-American, which dispels the “founding myth” that the United States is a “Christian nation.” We’re hoping it will change at least a few minds on Capitol Hill.

Freethinking wit
In fact, we are so confident of the persuasive power of books that we ourselves have just published a book of irreverent cartoons by Don Addis, legendary daily editorial cartoonist of the St. Petersburg Times. Get it for yourself — and for anyone you’d like to persuade. A little humor goes a long way. 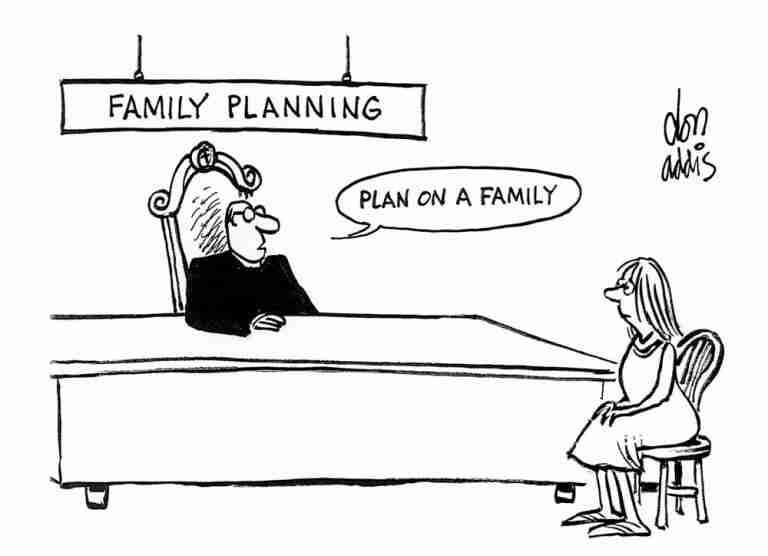 ABC censors us!
Unfortunately, our attempts at changing minds through the medium of television was squelched by ABC this week, which refused to air during the Thursday Democratic debate our Ron Reagan “not afraid of burning in hell” ad and even our noncontroversial JFK separation of state and church spot. 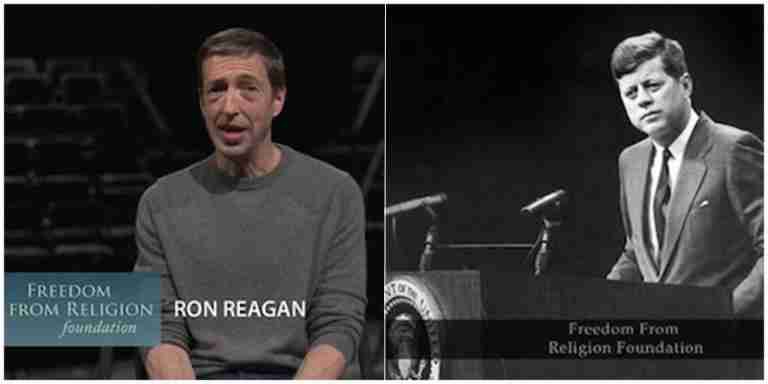 “Further complicating matters, the Freedom From Religion Foundation — a legal advocacy group that promotes separation of church and state — claims the channel rejected two of its proposed ads for the same night,” a New York magazine website reported on our unfair treatment in comparison to other groups permitted political ads aired during the debate, such as an Alexandria Ocasio Cortez-centered screed. “And later in its broadcast, ABC aired an ad funded by NumbersUSA, an anti-immigration organization.”

Our storied campaign history
FFRF has had a storied history of using billboards and ads to get its message across, and our Facebook Live “Ask An Atheist” program this week had Annie Laurie and yours truly focusing on the highlights (and the lowlights, such as censorship of our efforts) of our various public relations campaigns. 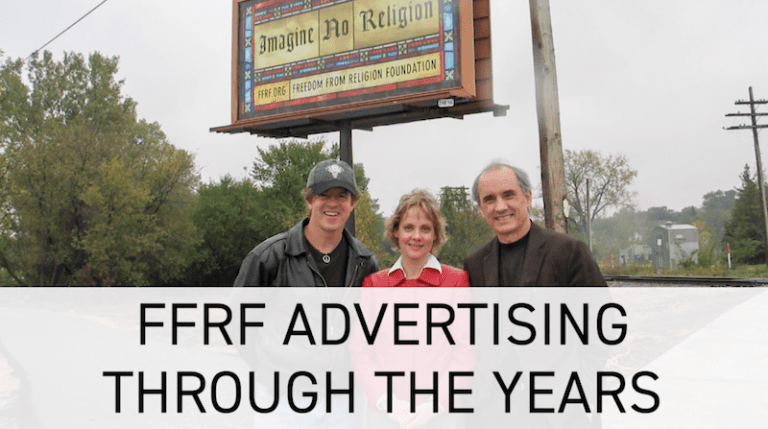 Watch a brilliant legal scholar
It’s because of such censorship that we’ve created our own freethinking TV program to get the word out. This week, on “Freethought Matters,” we have one of the most brilliant legal scholars in the country interviewed by guest hosts Andrew and Liz Cavell, both FFRF attorneys. You can watch Professor Geoffrey Stone provide his incisive constitutional insights on Sunday in 12 major cities around the country or on our YouTube channel any time. 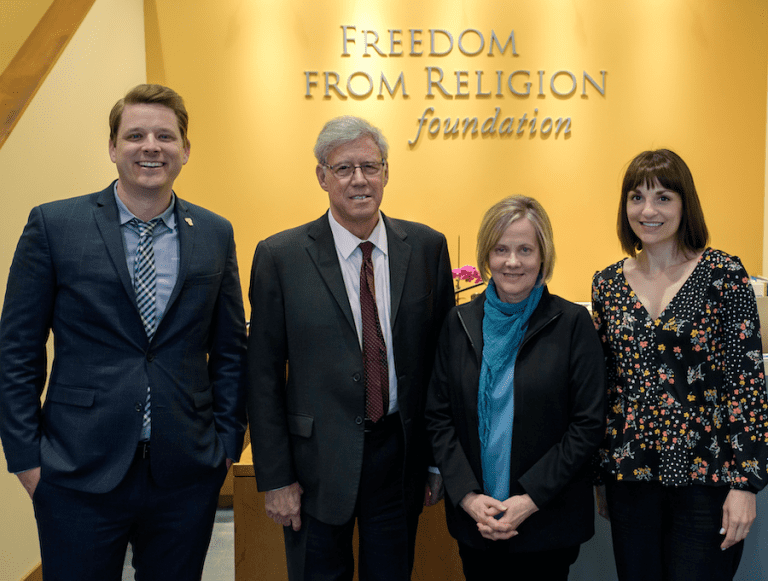 They love us!
Newspapers and magazines have been loving us recently. Newsweek magazine (yes, it still exists) has spotlighted an objection of ours to baptisms at a Tennessee public school.

“A Tennessee school district is under fire after student athletes were baptized on school grounds last month,” the publication reported. “After learning two football players at Springfield High School were baptized on the football field last month, the Freedom From Religion Foundation (FFRF) sent a letter to Robertson County School District Superintendent Chris Causey, claiming the acts violated the Constitution’s separation of church and state.” 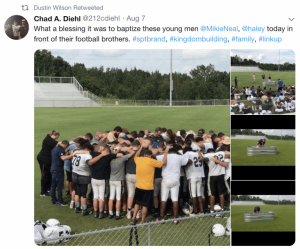 Stop wasting your time, guv
And our complaint about the Oklahoma governor speaking in his official role at a church has received plenty of coverage by the state’s media outlets.

“A group advocating for the separation of church and state on Tuesday accused Gov. Kevin Stitt of using his office to promote religion,” the Tulsa paper has reported. “Stitt in his official capacity as governor is speaking at 7 p.m., Sept. 22, at Guts Church in Tulsa, according to the Freedom From Religion Foundation. The event uses his title to seek attendees. In a Monday letter to Stitt, the Freedom From Religion Foundation, based in Madison, Wisconsin, said if Stitt wanted to discuss religion, he should do it as a private citizen and not as governor.”

Being in agreement with John Lennon
On our radio show this week, Annie Laurie and FFRF Co-President Dan Barker chatted with FFRF Attorney Chris Line about a number of recent victories he has obtained in Southern schools and then interviewed our engaging Michael Hakeem Memorial College Student Essay Contest winner Jack Buchanan, age 20, about why he’s in agreement with John Lennon. 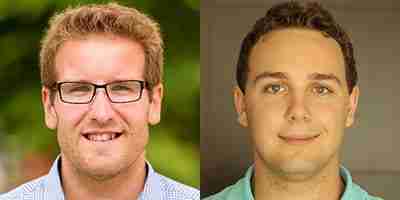 Andrew debates on C-SPAN
Andrew’s book tour is going great. This week, he debated George Fox University Professor Mark David Hall at the University of Louisville on “Did America Have a Christian Founding?” C-SPAN will be airing the debate next week! Stay tuned for the details.

Dan in Puerto Rico
Dan has had successful recent travels of his own, venturing out to Puerto Rico to speak at a number of events there. You can catch a glimpse of him at the San Juan airport at the beginning of our most recent “Ask An Atheist” show.

Billboards, television, radio, books, newspapers, magazines or in person — whatever medium we use to connect with people, we are able to do it only due to your backing and generosity.

All Articles by this author
PrevPreviousScholarships, television and more
NextConstitution Day, correcting school violations and a CSPAN appearanceNext