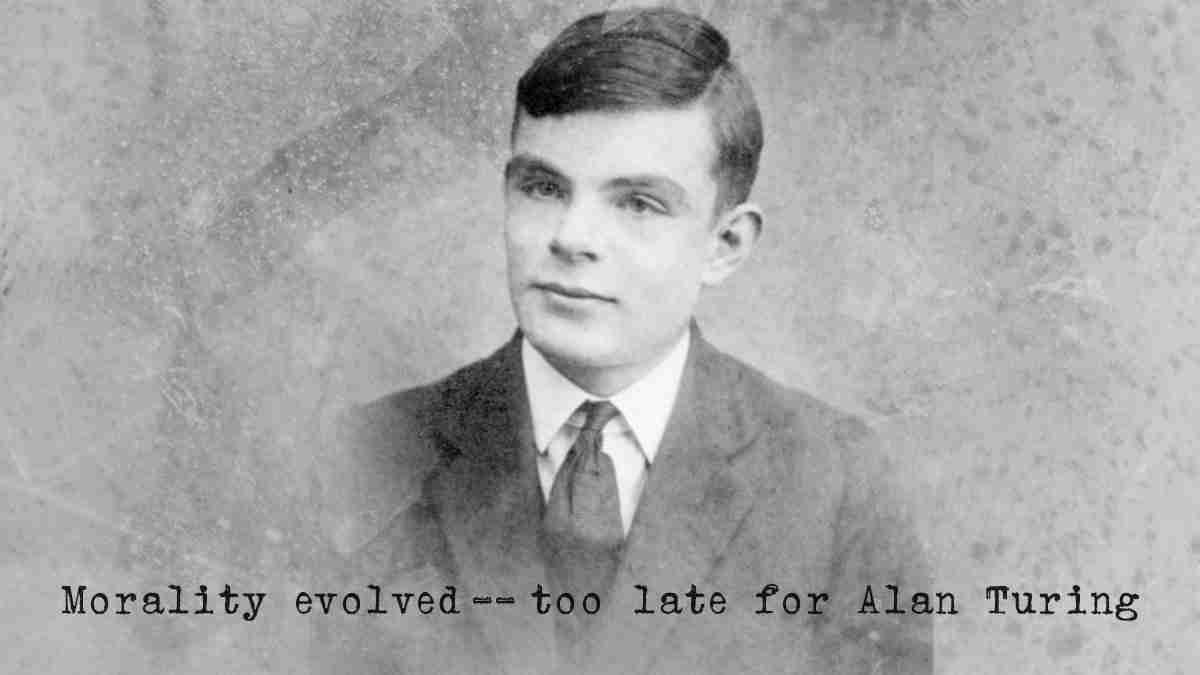 For example, Leviticus 20 commands that males who engage in gay sex must be killed. “They shall be put to death, their blood is upon them.” (Oddly, lesbians aren’t mentioned.)

However, this gory mandate is abandoned today in compassionate Western democracies, most of which decriminalized homosexuality and permit gay marriage. It’s a historic stride for decency and secular humanism — generally achieved against church opposition.

Here’s a sad example from the bad old days:

He developed a “Turing machine,” an early computer that cracked the Nazi military’s baffling Enigma code by applying step-by-step algorithms to symbols. It was an enormous breakthrough that enabled Allies to intercept Nazi U-boats, air squadrons and other attacks. Winston Churchill said Turing did more to defeat Germany and shorten the war than any other person.

Unfortunately, Turing was gay at a time when homosexuality remained a felony. After the war, he invited a thug into his home, who later returned to rob him. When police investigation uncovered evidence of Turing’s sexuality, he was prosecuted. He was offered a choice of prison or chemical castration. He chose the latter.

But it was tragic, turning his athlete’s body to mush. And his elite security clearance was revoked. In despair, he committed suicide with cyanide.

Later, after morality evolved, Britain was ashamed of Turing’s treatment. In 2009, Prime Minister Gordon Brown issued a government apology for “the appalling way he was treated.” In 2013, Queen Elizabeth granted him a posthumous pardon. In 2017, Parliament passed the “Alan Turing Law” retroactively pardoning men convicted under past taboos. In 2019, his face was put on the 50-pound note.

Today, Turing is a British hero, with statues of him in several places and science prizes named for him. In a 2019 BBC poll, he was voted the greatest person of the 20th century.

It’s a shame that his recognition came too late, after he was destroyed by hateful antique morality.

James A. Haught, syndicated by PeaceVoice, was the longtime editor at the Charleston Gazette and has been the editor emeritus since 2015. He has won two dozen national newswriting awards and is author of 12 books and 150 magazine essays. He also is a senior editor of Free Inquiry magazine and was writer-in-residence for the United Coalition of Reason.
All Articles by this author
PrevPreviousVaccines, abortion rights highlight another busy week at FFRF
NextWho’s insane, Gov. DeSantis? Anti-science govs drink anti-vax Kool-AidNext