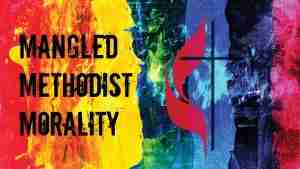 The bible says that we must kill gays.

Leviticus 20:13 commands:  “If a man also lie with mankind, as he lieth with a woman, both of them have committed an abomination: they shall surely be put to death; their blood shall be upon them.”

America is much kinder than the bible. Although a couple of gay men were executed in colonial times, no government killings have occurred in the United States. Old laws against “sodomy” were struck down when the Supreme Court made gay sex legal in 2003. Then, same-sex marriage was approved by the court in 2015. These human rights victories were a blow against religion.

Large swaths of U.S. Christianity still cannot accept such compassionate treatment of homosexuals. The huge United Methodist Church currently is breaking apart over the issue. It’s a painful battle that has been brewing for half a century.

Back in 1972, as gays were coming out of the closet, the church adopted a stand against them, saying: “We do not condone the practice of homosexuality, and consider this practice incompatible with Christian doctrine.”

But young liberal ministers defied their denomination. They performed gay weddings, and some openly gay ministers were ordained. Older, conservative Methodists felt betrayed. At a special 2019 assembly, delegates voted 438-384 to uphold the church’s ban on LGBTQ clergy and same-sex marriages. Liberals vowed to continue their rebellion. So the denomination adopted a “disaffiliation” plan allowing congregations to leave the United Methodist Church by the end of 2023 “for reasons of conscience” about homosexuality. Each parish that voted two-thirds for separation could take its building and go.

In late 2022, the breakaway snowballed into a major split. Just before Christmas, 493 Texas churches voted to quit, presumably to join a new anti-gay denomination. Their action followed other departures in North Carolina, Alabama, Louisiana, Georgia, Arkansas and Florida. In Alabama, 198 quit on a single day. So far, more than 2,000 have chosen to leave, mostly in the South. In Tennessee, many churches are set to vote April 23, with others to follow.

By the end of next year, will half of United Methodism be gone? Keep watching the news.

Some far-right religious websites declare that America’s growing acceptance of gays fits bible predictions of “false doctrines,” which means that Jesus soon will return in the Second Coming.

Hundreds of congregations also have left Presbyterians, Episcopalians and Lutherans because they can’t accept gay equality. I think these crackups send a clear message: Great numbers of American Christians cannot extend simple human kindness to people who are different.

James A. Haught, syndicated by PeaceVoice, was the longtime editor at the Charleston Gazette and has been the editor emeritus since 2015. He has won two dozen national newswriting awards and is author of 12 books and 150 magazine essays. He also is a senior editor of Free Inquiry magazine and was writer-in-residence for the United Coalition of Reason.
All Articles by this author
PrevPreviousAbortion pills should be available to all
NextHow I once debated the late (not great) Cardinal George Pell Next