Madison priest provokes a question: What would possess anyone to believe in demons? 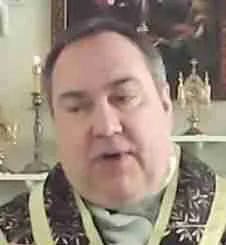 In the 21st century, what would possess a grown man to believe in demons? The Roman Catholic Diocese of Madison, Wis., has just publicly announced that it has parted ways with a local priest who was conducting “exorcisms” related to what he claimed was widespread voting fraud. The exorcisms themselves have been excised from YouTube. This adds to the growing body of evidence that Christian Nationalists and screwballs are behind much of the false “voter fraud” hysteria that led to the Jan. 6 invasion of the U.S. Capitol.

The diocese called Rev. John Zuhlsdorf a “freelancer,” whatever that means, announced that he was not an employee of the diocese or a parish, and that they have parted ways.

There are so many embarrassments here for the Madison diocese.

First is the fulsome praise: “The bishop of Madison is grateful to the Reverend Zuhlsdorf for his faithful support of the diocese’s seminarians and priests, thanks him for his many years of steadfast ministry serving the diocese, and wishes him the best in his future endeavors.”

Second is the diocese’s admission that it had given the priest permission to grant exorcisms, just not for “partisan political activity” but rather for the “alleviation from the scourge of the coronavirus pandemic.”

Yes, the Madison diocese unashamedly believes that a virus is the work of the devil. The practice of exorcism is defined by the U.S. Conference of Catholic Bishops as “a specific form of prayer that the Church uses against the power of the devil.” It should be mortifying to any organization in 2021 — even the Catholic Church — to attribute disease and infection and other ills of society to “the devil.”

The New Testament Jesus routinely and ignorantly attributes disease to the devil, such as in Mark 9:20-22. In one of the many barbaric passages of the bible, also showing its abuse toward animals, the Jesus of the New Testament is described as exorcising demons out of a man with an “unclean spirit” and transferring them to a herd of swine, causing them to plunge into a lake to drown themselves.

This is one of the more illogical stories in a “holy book” filled with irrationality, contradictions and tall tales. Why couldn’t a supposedly omnipotent deity just destroy the “unclean spirit”? Why on earth transfer them into poor innocent pigs and destroy the pigs? But logic doesn’t enter into the Christian conception of exorcism, devils or reality in general. There are a number of instances where Jesus is depicted as conducting exorcisms, inspiring countless acts of unnecessary cruelty, torture and deaths.

Exorcisms are on the rise not only in Mexico, where most citizens subscribe to Catholicism but also in the United States. Indicative of the growing popularity is this website from the Archdiocese of Washington, D.C., actually titled “Request an Exorcism.”

By the way, this archdiocese is led by Wilton Gregory, who was called on by President-elect Joe Biden to lead a public prayer for coronavirus victims and their families on the eve of his inauguration. Too bad Biden missed a chance to ask Cardinal Gregory to perform a coronavirus exorcism!

The Vatican confirmed the final test of “Exorcisms and Related Supplications” in December 2016, and it was implemented in U.S. dioceses by June 2017. In a Q&A on the procedure, the document explains why the church needs exorcisms and, ridiculously, asks: “How may an exorcist ensure that an exorcism is not perceived as a magical or superstitious activity?”

The enduring belief in exorcisms and endorsement by the Catholic Church and, increasingly, evangelical churches is no laughing matter, however.

Many exorcisms that the New Testament describes being performed by Jesus clearly were performed on those who were mentally ill. Even in the modern era, mentally ill individuals believed to be “possessed of the devil” have been tortured and murdered by the devout. One tragic case involved a young German woman with temporal lobe epilepsy and depression, who began to hear voices. She and her family became convinced she was possessed by a devil, and she underwent 67 Catholic exorcisms, dying of malnourishment and dehydration as a result in 1976.

Not all of the deadly exorcisms are being performed by Catholic priests and officials, since any Christian bible believer may dip into the New Testament to find grist for their superstitious mill. Just a year ago, seven people were found dead after a suspected exorcism in Panama, involving a religious sect, the New Light of God. And a grotesque case occurred in 2017 in Nicaragua, where a 25-year-old woman with mental illness was held prisoner by an evangelical pastor and his congregation for a week before being burned on a pyre.

Unfortunately, mentally ill individuals themselves may gravitate to performing “exorcisms,” believing they have the blessing of Jesus. Tragic instances of child abuse involve exorcisms, especially by parents in need of medical treatment, not religious teachings, such as a Virginia father who became convinced in 2011 that his 2-year-old toddler was possessed by a demon. She was punched and choked to death, and found wrapped in a blanket surrounded by bibles. Plus, a 6-year-old died a horrific death when his Arizona father drowned him in hot water to cast out a demon.

As for the unrepentant priest, who is a critic of Pope Francis, he announced his decision to leave Madison on his “Fr. Z’s Blog,” complaining of “‘cancel culture’ now infecting the Church” and a “Catholic Antifa now.”

The only good thing that can be said about this brush with exorcism is that the Church, correctly, recognized it couldn’t keep or countenance a priest within their ranks who was performing “partisan political” exorcisms.

Annie Laurie Gaylor is co-president of the Freedom From Religion Foundation. She co-founded FFRF in 1976 as a college student with her mother Anne Nicol Gaylor. She served as the editor of FFRF’s newspaper, Freethought Today, from 1985-2009. She became FFRF co-president with Dan Barker in 2004. Annie Laurie has authored three books for FFRF: Woe to Women: The Bible Tells Me So; Woe to Women: The Bible Tells Me So; and Women Without Superstition: “No Gods – No Masters”, the first anthology of women freethinkers.
All Articles by this author
PrevPreviousReligion, presidents, Inauguration ceremonies and the Capitol attack
NextThe intolerance of evangelicalsNext