Skip to content
PrevPreviousArrest of shooting victim for feticide in Alabama — a preview of ‘coming attractions’?
NextKeeping church and state separate does not stifle religious freedomNext

The things we accomplish — and have to contend with — here at the Freedom From Religion Foundation are sometimes hard to believe.

We recently dispatched more than 1,000 letters to a good portion of the South warning schools about how problematic bible classes are. Our missives to every school district and superintendent in Alabama, Georgia and Kentucky, and the Arkansas state Department of Education (which drafts a statewide curriculum) were a response to legislatures in all four states recently passing bills to hold bible classes in public schools. These bills are lifted from the playbook of Project Blitz, a Christian nationalist attempt to take over statehouses.

“Project Blitz starts with small bills that seem ceremonial or innocuous, but it has one goal: to make Christians a favored class in America, and turn all non-Christians into second-class citizens,” said FFRF Director of Strategic Response Andrew Seidel, a constitutional attorney who drafted the letters. “It’s Christian nationalism at its worst.”

No doubt about that.

“A Ten Commandments plaque that drew objections from the Wisconsin-based Freedom From Religion Foundation has been removed from Welty Middle School in New Philadelphia,” reports the local paper (check out the generous description of us the article starts out with). “In an email dated June 19, Brian J. DeSantis, a Cleveland attorney representing New Philadelphia City Schools, wrote to Legal Fellow Christopher Line of the Freedom From Religion Foundation to inform him that the plaque had been removed.” 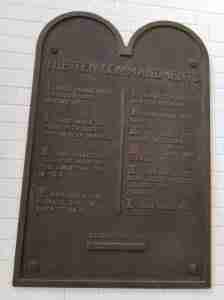 Busy in Washington
We were busy in the nation’s capital, too. We submitted a letter commending a House Labor and Education Committee hearing on the misapplication of the Religious Freedom Restoration Act. And FFRF representatives, including FFRF Director of Governmental Affairs Mark Dann, met with the Office of Management and Budget over the issue of discrimination based on religion. We are dedicated to furthering secular concerns in Washington, D.C., and elsewhere.

FFRF folks are also hard at work out on the road. FFRF Co-President Dan Barker, an accomplished pianist, will be performing at Heretic House in LA on Sunday, June 30. Come for some freethinking musical fun!

Andrew is also touring to promote his recently published book. On Sunday, June 30, he’ll be talking in Winter Park about The Founding Myth: Why Christian Nationalism is Un-American at an event put together by the Central Florida Freethought Community. And Florida Atheists and Secular Humanists (FLASH) will host Andrew on Monday, July 1, in Boca Raton.

Not-so-good Supreme news
Unfortunately, some of our energy this week was spent grappling with not-so-good news. The U.S. Supreme Court just today issued yet another blow to the principle of separation between state and church, vacating an appeals court decision against a massive Christian cross in a city-owned Pensacola park. That case was brought by the Freedom From Religion Foundation and the American Humanist Association. Undeterred by the Supreme Court, FFRF and AHA look forward to presenting their arguments again before the 11th Circuit. “A large cross displayed and maintained in a city park for worship services is unquestionably sectarian and confers endorsement of Christianity,” says FFRF Legal Director Rebecca S. Markert. 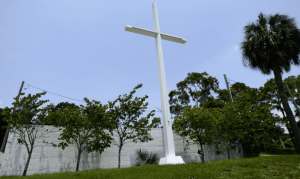 The Supreme Court decision was based on its recent shameful ruling regarding a humongous public cross in Bladensburg, Md. FFRF attorney Maddy Ziegler dissects the paired legal misfires in our “Newsbite” this week. In our “Ask an Atheist” Facebook Live feature, Rebecca, Andrew and FFRF Senior Counsel Patrick Elliott analyze the Bladensburg judgment more at length. In a blog, Andrew tears apart the U.S. Supreme Court’s misinterpretation of history in its Bladensburg verdict. And in our radio show this week, Rebecca discusses the Bladensburg case with Dan and Annie Laurie, after which they interview by phone from London journalist and author Catherine Nixey about her fascinating new book The Darkening Age: The Christian Destruction of the Classical World. 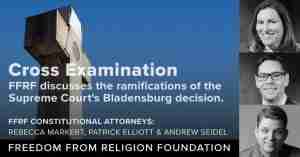 The Supreme Court has engaged in a slew of bad decisions recently. Yet another one was handed down today, where the court indicated it would review Espinoza v. Montana Department of Revenue, a case in which the Montana Supreme Court struck down the state’s tax credit program for those who donate to private school scholarships. The Freedom From Religion Foundation intends to submit an amicus brief in this case. “Preserving our secular public education system is one of our most important missions,” says Annie Laurie.

A misogynist law
Annie Laurie also wrote a blog to highlight how bad laws are being implemented at the state level, too. She focused on the case of Marshae Jones. The Alabama woman, who was shot in the stomach when she was five months pregnant and miscarried the fetus last year, has just been charged with manslaughter!

“It’s chilling to see U.S. law enforcement officers treating pregnant women like criminals, particularly women suffering from tragic accidents, illnesses, miscarriages or stillbirths,” she concludes. “Pregnant women should not be living in a police state. Of course, the ideology underlining all of this is a misogynistic theology that treats women like sinners who are nothing better than incubators and breeders.”

See, I told you it’s amazing how much we achieve and deal with in a single week here at FFRF — and we’re able to do it all only because of you.

All Articles by this author
PrevPreviousArrest of shooting victim for feticide in Alabama — a preview of ‘coming attractions’?
NextKeeping church and state separate does not stifle religious freedomNext