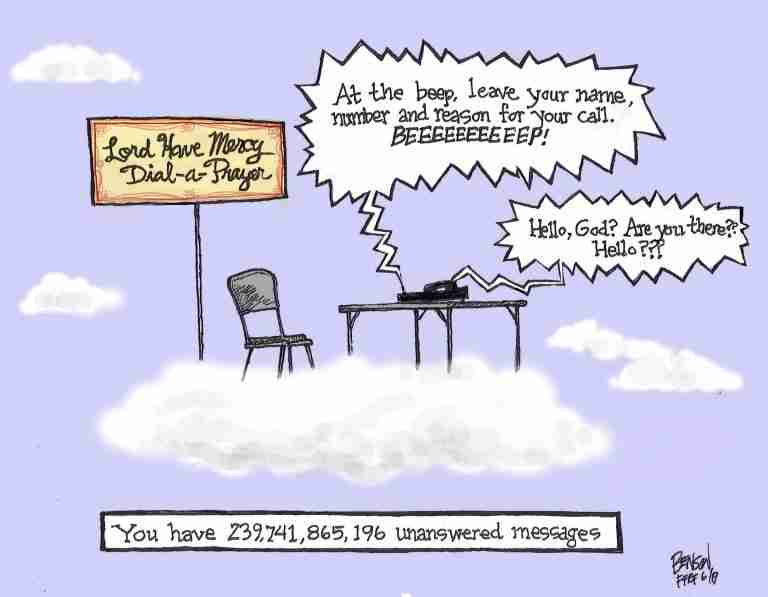 Simple logic clinches it. Why is an alleged god letting countless people die? If the god cannot save them, he isn’t all-powerful. If he could, but doesn’t want to save them, he’s heartless, not all-loving. He’s a monster.

The same logical conclusion applies to tsunamis, hurricanes, tornados, earthquakes, plagues, epidemics, famines, floods and other horrors that have killed multitudes even before this pandemic. If a god could stop the tragedies, but won’t, he’s evil.

And this logic also pertains to cruelties of nature. Why would a loving god design hawks to tear rabbits apart or cobras to kill children? Only a fiend would devise a system of ruthless predator-killers.

Reason cannot disprove the existence of an evil god, but it wipes out the benevolent father-creator claimed by most churches. The only intelligent conclusion is that such a loving god cannot exist.

The first known thinker to see this obvious truth was Epicurus (341-270 B.C.). Subsequent philosophers called it “the problem of evil.” For 2,500 years, priests and theologians have squirmed and tried to offer explanations.

Some have said “we cannot know the mind of God” — but they have claimed to know the mind of God on all other topics. Other theologians have contended that hideous suffering serves a higher purpose, leading to some “greater good” — but that attempted explanation is absurd on its face. Still others have argued that today’s horrors occur because Adam and Eve committed Original Sin by eating fruit in the Garden of Eden. That’s infantile. Does anyone really think that an ancient couple biting an apple produces today’s cancers, typhoons and snakebites?

So many failing explanations have been concocted that this field of excuse-making is labeled “theodicy.” (I think it should be called “the-idiocy.”)

A few religious figures have seen through this nonsense. Charles Templeton was a dynamic Canadian evangelist who teamed up with Billy Graham in evangelical crusades. But Templeton also was highly intelligent and began to doubt supernatural dogmas. He finally renounced religion and wrote a book titled Farewell to God: My Reasons for Rejecting the Christian Faith. Regarding the problem of evil, he wrote:

All life is predicated on death. Every carnivorous creature must kill and devour another creature. It has no option. Why does God’s grand design require creatures with teeth designed to crush spines or rend flesh, claws fashioned to seize and tear, venom to paralyze, mouths to suck blood, coils to constrict and smother — even expandable jaws so that prey may be swallowed whole and alive? Nature is, in Tennyson’s vivid phrase, “red in tooth and claw,” and life is a carnival of blood. How could a loving and omnipotent God create such horrors?

The freethinking Mark Twain had a similar observation, albeit in his unique style. In Letters from the Earth, he put it this way:

Who could worship a god who devised such cruelty? A creator of that sort would be repulsive, disgusting, contemptible. Instead of praying to such a monster, thinking people have concluded that nature and evolution – survival of the fittest – has produced deadly carnivores, and there’s no magical creator to do it.

Similarly, there’s no heavenly protector to save people afflicted with COVID-19. Trusting medical science is the only hope. And it’s futile to pray for relief. Such prayers are like phone calls that reach nobody — the other end of the line is vacant.

Atheism is rooted in scientific logic. And logic proves beyond question — more so in our present global situation— that a supernatural, all-merciful, all-powerful father-creator cannot exist.

The column is adapted and updated from a piece first published in the November 2017 United Coalition of Reason newsletter.

James A. Haught, syndicated by PeaceVoice, was the longtime editor at the Charleston Gazette and has been the editor emeritus since 2015. He has won two dozen national newswriting awards and is author of 12 books and 150 magazine essays. He also is a senior editor of Free Inquiry magazine and was writer-in-residence for the United Coalition of Reason.
All Articles by this author
PrevPreviousTheocrats, Trumpians, philosophy and belief
NextAbortion is essential — not religionNext