Let’s hear it for biblical blasphemy!

The theocratic blogosphere is a-twitter with “shocked” blogs condemning FFRF’s nontract, “An X-Rated Book: Sex & Obscenity In The Bible.” Setting the blogosphere off was a story in CNS News (“The right news, right now”) warning readers: “This story includes a lewd image . . . some readers may find disturbing.” The article reports that FFRF plans to distribute our pamphlet, along with several other books and materials critical of religion, in January to public high schools in Orange County, Fla. 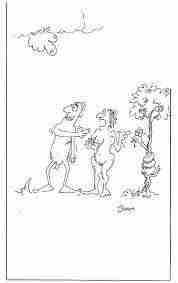 In classic “slay the messenger, not the message” hype, Christian news sites and bloggers claim to be greatly offended by the sketch on our nontract of a sexist bible grabbing a woman. None apparently is offended at the sexually violent and pro-rape content in the book they worship and seek to distribute to public high school students.

Last year we decided to “fight fire with fire” by seeking to distribute freethinking materials to counter so-called “passive distribution” of bibles by a Christian ministry at 11 high schools in the Orlando, Fla. area. We carefully chose a variety of materials to test the school’s so-called “public forum,” including several of our nontracts outlining problems with the bible. When Orange County Public Schools censored most of FFRF’s proffered materials, while permitting the bible distribution to carry on, we were forced to file a federal suit. (By the way, when this bible distribution took place, CNS News failed to warn: “This book contains many lewd images some readers may find disturbing.”)

During our litigation in Orange County schools, we pointed out the irony of the schools allowing distribution of a book containing violence, graphic and often depraved sexual descriptions, among many other objectionable passages, while censoring freethinking points of view factually reporting about what’s in this so-called “good book.”

In June 2014, the school district entered a motion to dismiss our lawsuit “unconditionally,” agreeing we may distribute these materials on Freedom of Religion Day (Jan. 16), the same day World Changers of Florida will be back in the schools with their X-rated bibles. And we’ll be there too. We’re happy to see the controversy. We don’t think bibles, or literature critical of bibles, should be distributed by outside interest groups in our public schools and we hope the controversy will ultimately shut down this inappropriate forum. But if it doesn’t, at least students will be offered both sides of the story.

This controversy provides an opportunity to tell the story behind the cartoon depicting a sexually assaulting “holy book.” I had been genuinely shocked and horrified by the degrading treatment of women in the bible when I read it for myself in my early 20s as a college student. For instance, examine this sick passage in Isaiah 3:16:

Moreover the LORD saith, Because the daughters of Zion are haughty, and walk with stretched forth necks and wanton eyes, walking and mincing as they go, and making a tinkling with their feet:

Therefore the LORD will smite with a scab the crown of the head of the daughters of Zion, and the LORD will discover their secret parts.

As editorial editor of The Daily Cardinal student newspaper at the University of Wisconsin-Madison, I loved working with a talented young artist on staff named Alma Cuebas, who specialized in depicting egalitarian “ugly women.” For a column about biblical misogyny, Alma fashioned a memorable drawing of a lascivious bible starting to assault a woman. Alma’s iconic drawing appears with some others by her in a book on bible sexism, “Woe to the Women: The Bible Tells Me So,” which I was asked to write for FFRF.

In the 1990s, when FFRF added to our collection of “nontracts” one called “An X-Rated Book: Sex and Obscenity in the Bible,” I naturally recalled Alma’s sketch of the sexist bible grabbing a woman, and we put that on the cover. Our nontract begins: “Let us introduce you to parts of the Holy Bible which you have not heard about in sermons from the pulpit, that may shock and dismay you and should certainly convince you that the bible ought to be X-rated.

“Below you will find a pornographic view of sex and women, lewdness, depravity and sexual violence often ordered or countenanced by the biblical deity. Don’t take our word for it — look it up for yourself.” A long list of bible citations follows, some silly, some gross, others horrific, many woman-hating. The nontract concludes with a favorite quote by Thomas Paine from “The Age of Reason”:

“Whenever we read the obscene stories, the voluptuous debaucheries, the cruel and torturous executions, the unrelenting vindictiveness, with which more than half the Bible is filled, it would be more consistent that we called it the word of a demon, than the word of God. It is a history of wickedness, that has served to corrupt and brutalize [hu]mankind.”

While FFRF has appealed parts of the ruling over our freethought lit distribution to the 11th U.S. Circuit Court of Appeals, we have the OK to distribute all of our submitted literature, including previously censored literature. And we’re inviting all comers to join us. The Satanic Temple has asked to distribute its coloring book. What do public schools expect when they open the door by permitting passive distribution of the Christian bible? They cannot engage in viewpoint distribution once they create such precedent.

It’s FFRF’s devout hope that our tactics will teach the schools not to set up irresponsible and unwise religion-based “forums” targeting a captive audience of students, making use of the machinery of tax-supported school buildings. Schools exist to educate, not to proselytize, or to act as conduits for recruiting evangelists (or atheists).

Will FFRF materials be there on Jan. 16? You betcha! We thank our hardworking local plaintiff and organizer David Williamson, director of FFRF’s chapter, the Central Florida Freethought Community, for making the distribution possible. And FFRF will unapologetically distribute our nontract, “An X-Rated Book.”

P.S. My mother Anne Nicol Gaylor, as FFRF’s principal founder, was equally taken with Alma’s “ugly women.” She asked Alma to illustrate four short vignettes that open FFRF’s first book, “The Born Again Skeptic’s Guide to the Bible” by Ruth Hurmence Green. Our favorite of these illustrations is Alma’s depiction of Adam and Eve. A pudgy finger is pointing out of a cloud at the fully frontally naked and embarrassed looking Adam (sporting an angry scar over his rib), who in turn is pointing to Eve holding a half-bitten apple, who in turn points to the snake, wearing a Mafia-like hat with a cigarette falling out of his mouth. This charming ink sketch, used in some early ads for Ruth’s book, inevitably was censored by a few squeamish publications, apparently for Alma’s “sin of omission” for failing to include a deferential fig leaf for Adam.

Let’s hear it for blasphemy!

Annie Laurie Gaylor is co-president of the Freedom From Religion Foundation. She co-founded FFRF in 1976 as a college student with her mother Anne Nicol Gaylor. She served as the editor of FFRF’s newspaper, Freethought Today, from 1985-2009. She became FFRF co-president with Dan Barker in 2004. Annie Laurie has authored three books for FFRF: Woe to Women: The Bible Tells Me So; Woe to Women: The Bible Tells Me So; and Women Without Superstition: “No Gods – No Masters”, the first anthology of women freethinkers.
All Articles by this author
PrevPreviousWhat Ben Affleck missed in the Islamophobia debate with Bill Maher and Sam Harris
NextDon’t ‘discount’ civil rights, despite ‘Daily Show’ spinNext